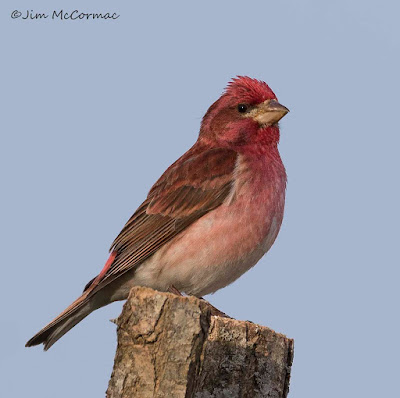 I shot this gorgeous male purple finch yesterday in Adams County, Ohio. These stunning raspberry-colored finches are always a treat to see. Some winters we have plenty, in others it's tough to find one. There are always some purple finches to be had in both spring and fall migration, especially if one is familiar with their soft tok call, often given in flight.

This bird was frequenting feeders at John and Tina Howard's Ohio Star Retreat Center not far from West Union. I had to speak at a conference on Thursday in Clermont County, which isn't too far from the retreat. So, I took the opportunity to go down early and spent all day Wednesday botanizing and photographing in the Ohio River Valley and various Adams and Scioto county hotspots. If time permits, I'll share some of those plant shots later.

John and Tina's retreat is a great place to stay. Nice and neat as a pin, inexpensive, and very convenient to lots of natural history hotspots. As a bonus, John maintains a feeding operation just off the deck which attracts lots of interesting birds. The feathered visitors are quite approachable, and especially towards day's end, the light is great. Two red-headed woodpeckers were also coming in while I was there, along with many other species.