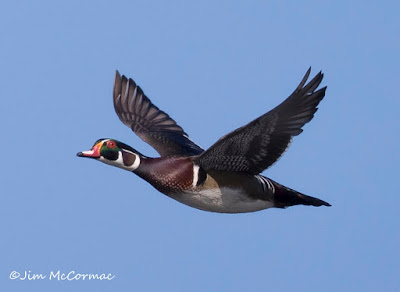 A male wood duck is a startling sight, resplendent in a rainbow palette artfully patched together. The bird verges on gaudy but is too elegant to merit any descriptor that hints at tastelessness. It’s as if Picasso himself had been commissioned by Mother Nature to create a feathered masterpiece.

On a recent visit to the largest inland wetland complex in Ohio, the Killbuck Valley near Wooster, I saw scores of wood ducks. Migration was in full swing, and local nesters were augmented by migrants. The colorful drakes glittered in the sun and chased brown hens.

Such an abundance of “woodies” was not always the case. Some ornithologists were predicting eminent extinction for the gorgeous species by the early 20th century. Widespread destruction of forested wetlands critical to fostering wood ducks was the major culprit in declines. The disappearance of beaver, which created great habitat, and unregulated overhunting also played roles.

Our forests have recovered significantly during the past 50 years, and forest-dependent animals such as wood ducks have gained ground. Careful regulation of bag limits has eliminated hunting as a source of decline. Beavers are once again common, and the furry engineers are busily creating wetland habitat.

A huge factor in wood duck population spikes is the erection of nest boxes on an epic scale. This duck is one of seven species of North American fowl that nests in cavities. Before human intervention, woodies used natural cavities in trees such as beech and sycamore. Old nest holes created by pileated woodpeckers were especially important breeding sites.

In 1937, biologists with the U.S. Biological Survey (predecessor to the U.S. Fish & Wildlife Service) hit on the idea of creating artificial cavities. The wood duck nest box was hatched, and it has had an enormously positive impact on Woodie conservation. Thousands of boxes dot North American wetlands, helping to spawn legions of fuzzy ducklings.

As an aside, these boxes have promoted spikes in incidental beneficiaries. Hooded mergansers often use them, as do eastern screech-owls, great crested flycatchers and prothonotary warblers.

The ducklings might appreciate the typically low altitude of nest boxes. Within a day of hatching, the youngsters are goaded to leap from the cavity by their mother. If the nest hole is 70 feet up in a sycamore, that’s quite a plunge. Nonetheless, the downy featherweights bounce harmlessly off the forest floor and are promptly marched to the nearest water by the hen.

In about two months, the youngsters will take flight. With a bit of practice, they’ll become one of the duck world’s most extraordinary aerialists. Aided by a long rudderlike tail, wood ducks are agile flyers able to dart and weave through thickly treed woodlands and deftly decelerate to enter small nest holes.

Artistic renderings of wood ducks have graced the federal “duck stamp” three times since its inception in 1934. Formally known as the Federal Migratory Bird Hunting & Conservation Stamp, purchasing a stamp is required for waterfowl hunters. Because duck stamp sales have done so much to conserve habitat, many non-hunters also buy them.

To date, duck stamps have raised about $800 million. Ninety-eight percent of this revenue goes to habitat protection, which equates to nearly 6 million acres. Much of that habitat helps wood ducks and myriad other creatures.