Hard to keep current with the blog of late, due to travels and too many commitments. I'm not wanting for subject matter, though - many of my excursions, if not specifically photographic in nature, at least allow for some pictorial exploration.

Last Saturday involved work and play. Debbie DiCarlo and I were scouting a few spots in advance of our "Prairies at their Peak" photo workshop the following day, and stopped by a wonderful fen in west-central Ohio to see how things looked. Of course, we had cameras in tow and were creating imagery along the way.

ASIDE: The workshop mentioned above was full with twelve people, and we had a great time. Lots of images of everything from tiny macro insects to sweeping prairie landscapes. Scores of great images were made, and I think we all advanced our knowledge of picture-taking, and natural history. Our next workshop will immerse the group into a deluge of biodiversity and fascinating subjects, as we'll be visiting southern Ohio's Shawnee Forest and vicinity. That'll be August 31 - September 2, and we can take a few more participants. All of the details are RIGHT HERE.

Anyway, while scanning a fen meadow on last Saturday's scouting trip, I spotted a gorgeous golden dragonfly shoot past. I was mostly focusing on dragonflies at that point of our field trip, as I'm trying to photo-document as many damselflies and dragonflies as possible for the Ohio Dragonfly Survey. I knew the golden insect was special, and began stalking it. It was, if my suspicion was correct, a dragonfly I had only seen once before in Ohio, when Rick Nirschl found the first state record in Lucas County in the summer of 2008. That was such a notable find that I met Rick at the site specifically to see the beasts (he found a few). 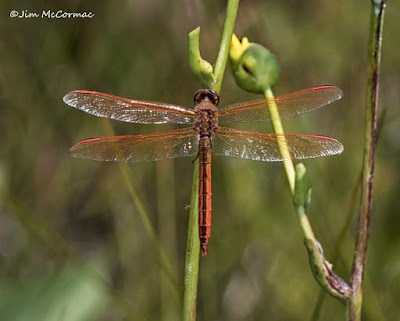 After a bit of watching and waiting, the animal finally alit on a stalk of prairie-dock, allowing me this documentary shot. Yes! A golden-winged skimmer, Libellula auripennis! This is a showy species of the southern and eastern states, with few but an ever-increasing number of midwestern records.

Following Nirschl's inaugural Ohio discovery, there were three other documented records, the most recent of which was last year during the Ohio Odonata Society's annual conference, appropriately enough. Unless I'm missing something, this record would make Ohio's fourth record of golden-winged skimmer, but I'll wager there will be plenty more in the coming years. 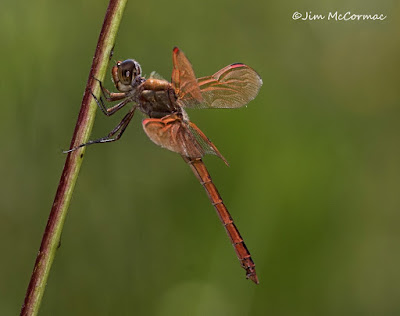 It was hot and sunny when I found the skimmer, so the bug was quite active and quick to flee. Nonetheless, he - it is a male - eventually allowed me this one nice pose, and I took advantage. Golden-winged skimmers are striking insects due to their large size and gorgeous golden-orange coloration, and also quite distinctive. If you see one, please let me know, or better yet, report it to the aforementioned Ohio Dragonfly Survey. One of our main goals with that three year project (2017 thru 2019) is to document shifts in dragonfly populations.

Finally, a note about dragonfly photography. There are many ways to photographically skin a dragonfly, or damselfly, and most any camera can get an identifiable shot if the shooter can get close enough (AND the species is identifiable in a photo). But dedicated macro lenses often work best, and my two favorite dragonfly lenses have long been Canon's superb 100mm f/2.8 macro lens, and the quirky but crazy sharp Canon 180mm f/3.5 macro lens. In a perfect world, I would use the 100mm for small stuff like bluets, forktails, and spreadwings, and the 180mm for larger dragonflies. The latter is a telephoto macro lens that allows the user to be about twice as far away as is necessary with the 100mm lens. Keeping distance from the subject is helpful as dragonflies can be quick to flee in the face of a perceived threat.

But recently I've hit on a new favorite dragonfly lens rig, usually mated to my Canon 5D IV. It is the aging but still amazing Canon 300mm f/4, with image stabilization. I got this lens used a while back, and didn't have to pay a lot for it. It's good for lots of things, but when I coupled it with a 12mm extension tube and turned it to dragonflies, I realized it was an excellent dragon-slayer indeed. The 300mm works well on even tiny damselflies, but really shines with the larger dragonflies. Because of its long focal length, I can often remain well back from the subject and am thus more unlikely to flush it. This lens/camera combo is what allowed me to photo-document the subject of this post.