I have been remiss in posting about one of the best parts of spring - the eruption of the earliest spring wildflowers. There are many signs of winter's thaw each year, but none pronounce the passing of cold and ice and the onset of spring as enthusiastically as do colorful wildflowers. Each year, or nearly so, I make a peregrination to a few special hotspots in Adams County, to steep bluffs that overlook the Ohio River. Here, spring arrives far earlier than it does to points even a few miles away - far earlier than northern lands such as Columbus, or Cleveland.

So, on March 5 I made the trek southward, and was rewarded by the spectacle of a dozen or so wildflower species peeking from the ground - the first scouts in what will later become a botanical avalanche of flora. 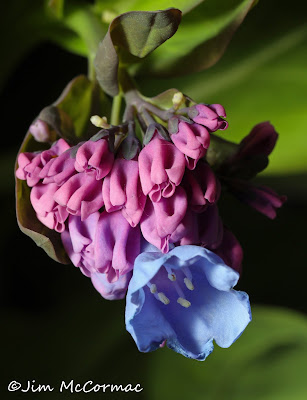 Virginia Bluebells, Mertensia virginica, were just starting to unfurl. One might argue that newly emerged plants, such as this one, are the showiest. The pink buds are punctuated by the first bright blue flowers. By now, this expansive hillside will be covered with acres of flowering bluebells. 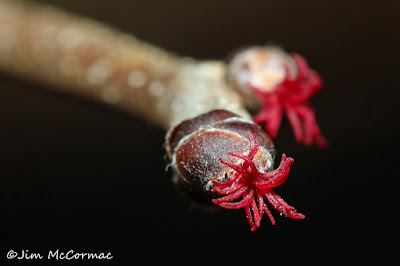 One of our first "wildflowers", and one of the easiest to pass by, is the female flowers of American Hazelnut, Corylus americana, a shrub. The dangling yellowish spikes of male flowers are far easier to spot, and when one does, all that is necessary is to move in close and inspect nearby terminal branch tips. The bright scarlet flowers may be tiny, but are quite showy upon close examination. 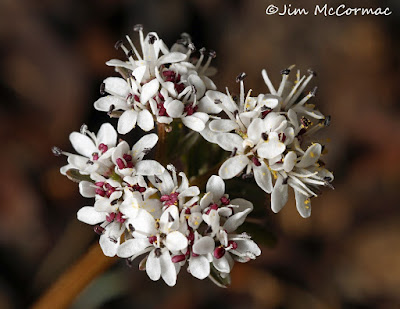 Harbinger-of-spring, Erigenia bulbosa, had burst forth in great profusion even on this early date. It was everywhere I looked, and one notable wooded floodplain sported many hundreds if not thousands of the elfin parsleys. A whopper plant might tower only two inches or so off the forest floor, and some plants remain concealed by leaf litter. 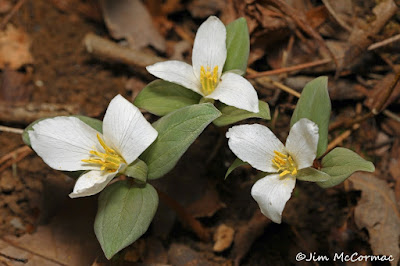 Snow Trillium, Trillium nivale, always a crowd-pleaser and a plant that I make an effort to see each spring. This little lily - smallest of the eight Ohio Trillium species - is also the first to bloom. It's common name is apt - flowering plants are routinely blanketed by early spring snowfalls. 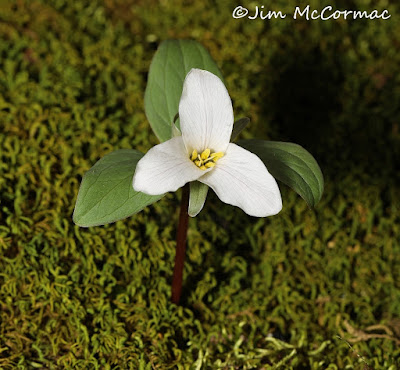 This individual had the good manners to grow alone on a rich bed of moss, making for good photographic fodder. The Adams County honey-hole where I photographed these Snow Trillium is in the midst of a boom year. More plants than I ever recall seeing there were shooting forth, and the population still had a ways to go before reaching peak bloom. Many thousands of plants occur here - the biggest population of Snow Trillium in Ohio, and probably one of the largest anywhere. 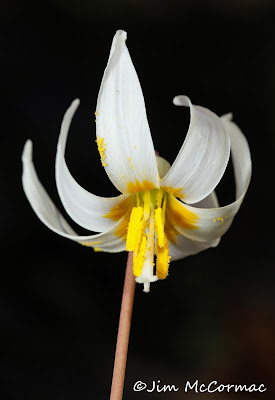 Hardy White Trout Lilies, Erythronium albidum, were flowering in numbers most everywhere. These graceful lily is always one of the very first wildflowers to pop up. As is always the case with small plants, the photographer must go prostrate to present them well. I had my head pressed into the forest humus to get an upward angle of the gorgeous six-petaled flower, which is only held 6-8 inches aloft on its bare flesh-colored peduncle.

By now, far more spring wildflowers will have sprung forth, and they'll reach a climax in southern Ohio in mid-April or so. I'll hope to get back down there before long, and shoot some more of them.

Thank you for a very nice post!!! Great images of a very beautiful flowers!! I love Spring:)
Kim