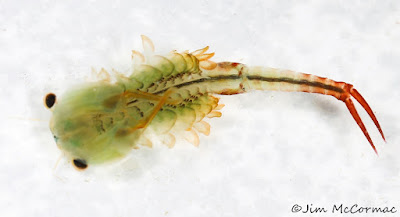 On Independence Day in 1972, Harold von Braunhut was awarded a patent for "Sea-Monkeys." They already had become the stuff of legend; he had been selling the seemingly magical creatures under that name for a decade.

One need only buy a packet of eggs, add water and voila, soon Sea-Monkeys will be swimming around the aquarium. They are actually a type of brine shrimp, and the eggs are in a state of cryptobiosis, a dormancy broken by moisture.
A wild Ohio counterpart of Sea-Monkeys are fairy shrimp. These small crustaceans also burst to life when they hit water, but their aquariums are vernal pools.
Vernal pools are small, highly specialized wetlands that normally only hold water seasonally. Fueled by snowmelt and spring rains, they peak from late February into May and have largely dried out by summer's onset.
During their brief saturation, vernal pools become nurseries for an astonishing array of life. You'll often hear the pool before you see it, courtesy of the cacophony created by spring peepers and western chorus frogs.
Early-season warm rains send armies of salamanders marching to the ponds. There, large congresses of the amphibians writhe in a short-lived mating frenzy, leaving their spawn to develop in the pools.
Massive, predatory diving beetles scoot through the water, seizing small animal prey. Casemaker caddisflies trundle along, wearing ghillie suits of twigs. Gorgeous wood ducks stop to feast on the bounty, whistling high-pitched squeals when flushed.
Arguably the most interesting organisms are the fairy shrimp. These inch-long creatures are confined to vernal pools and adulthood lasts only two months or so.
I recently was shown a beautiful vernal pool in Zaleski State Forest in Vinton County by biologist Laura Hughes. Our visit occurred after nightfall, the better to see salamander activity. Upon shining our lights into the water, we noticed scads of fairy shrimp wafting about.
The creatures had recently emerged, their eggs having lain dormant in the pool's muck for the past ten months. Like the Sea-Monkeys, the addition of water to the vernal pool had awoken them from their embryonic slumber.
Delicate and graceful, the shrimp are powered by eleven pairs of feathery legs. When alarmed, the animals dart away with a rapid burst of speed. They, like other life-forms drawn to the pool, are there primarily to reproduce. Plankton and other tiny organic matter fuel them.
Soon after mating, the female develops up to 150 hard, cystlike eggs. These are visible through a translucent pouch on her midsection. When released, the eggs fall into detritus on the pool's bottom. They can withstand drought, extreme cold and heat.
The next spring, the eggs will release larval shrimp to begin the cycle anew.
Since colonization by Europeans, Ohio has lost about 90 percent of its wetlands. Vernal pools have been hard-hit. Their small size and isolated distribution make them especially vulnerable to development.
Vernal pools are treasure troves of fascinating biological diversity and those that remain should be protected at all costs.
Naturalist Jim McCormac writes a column for The Dispatch on the first, third and fifth Sundays of the month. He also writes about nature at www.jimmccormac.blogspot.com.

Great little essay. Vernal pools are indeed such special habitats. I've visited some in California that were threatened by an airport construction proposal. Fortunately, the property is now in TNC ownership.
"...preserved at all cost" - A pretty tough sell in the current political climate, but we must persist.