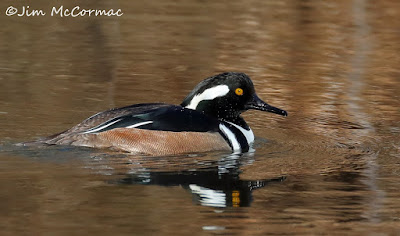 Signs of spring start materializing come mid-February, especially in mild winters like this one. Our first "wildflower," skunk cabbage, bursts from spring-fed mires. Buds begin to pop on elms and maples.


The earliest bees and flies appear, ready to tap nectar from pioneering spring flowers, such as harbinger-of-spring. Skunks become active, as your nose might have told you. And early birds become obvious: turkey vultures soaring overhead, killdeer yelling in the fields, and red-winged blackbirds teed up on shrubs.
As Mark Twain said, "It's spring fever. That is what the name of it is." And nothing expresses the testosterone-fueled vernal rush of hormones like male ducks. By this time of year, drakes are busily courting seemingly oblivious hens.
I recently visited a local patch new to me: Char-Mar Ridge Park, part of the Preservation Parks of Delaware County holdings. The centerpiece of the 128-acre property is a beautiful pond backed up by an aging dam. Anchored to the south shore is an excellent blind, or "hide" as the Brits would say.
Upon cresting the rise and spying the small lake, I saw a dozen hooded mergansers at the far end. Ducking into the blind and out of sight, I didn't have to wait long for the ducks to swim my way.
You might still be missing a vital part of Gaea if you've never clapped eyes on a drake hooded merganser. What it lacks in size is more than compensated for with its feathered finery. Vermiculated beige flanks are capped by a back and head of the deepest ebony. A snowy bib bordered by white slashes punctuates the sooty breast.
Topaz eyes stare inscrutably above a thin, sharply serrated bill — good for snaring slippery aquatic prey. Best of all, though, is the bird's crest. In repose, the merganser appears coiffed with a white, slicked-back mullet. But when aroused, he flips his topknot erect like a geisha's fan, completely transforming his look.
The hens are, by comparison, brown and drab. They do sport a shaggy topknot that would make a punk rocker proud. When the drakes come a courting, the females play coy and act uninterested. The studs let it rip, fanning crests and pumping heads, throwing their bills skyward while emitting weird burping groans.
These are the steps that must be taken to make little hooded mergansers.
And it can only be a good thing that there are ever more hooded mergansers, at least in this region. The first Ohio Breeding Bird Atlas was conducted from 1982 to 1987. Breeding Bird Atlas II ran from 2006 to 2011. Hooded mergansers increased by 92 percent between atlases.
A century ago, rampant deforestation, loss of wetlands, and the virtual disappearance of beavers hurt the mergansers. We've compensated for that early nature nihilism by helping to restore wetland-engineering beavers, rebuilding lost wetlands and allowing forests to rebound, which protects water quality.
Pivotal to the success of the hooded merganser are cavities, in which they place their nests. Dead and dying trees form some suitable holes, but the boom really began when people started erecting nest boxes for wood ducks. The hollow tubes worked just fine for mergansers, contributing greatly to their resurgence.
Naturalist Jim McCormac writes a column for The Dispatch on the first, third and fifth Sundays of the month. He also writes about nature at www.jimmccormac.blogspot.com.
Further afield
Expect to see plenty of ducks, including hooded mergansers, at the 17th annual Shreve Migration Sensation in Wayne County on March 18. The event includes a variety of talks, plus field visits to the vast wetlands of Funk Bottoms and Killbuck Marsh. For details, visit www.shreveohio.com/migration-sensation.
at March 07, 2017

We moved to the Florida panhandle 2 years ago, finding a home on a small freshwater lake near the Gulf. One of our steadiest joys now is that both winters a small flock of hooded mergansers has wintered on our lake, providing us with daily sightings. Occasionally we'll even hear those strange calls! They truly are spectacular birds.