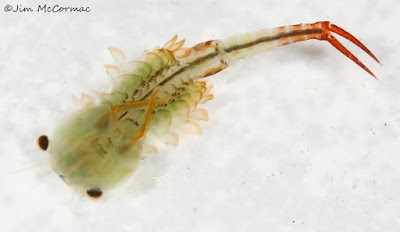 A male Fairy Shrimp,  Eubranchipus vernalis, one of the stranger inhabitants of eastern vernal pools.

Last night was reasonably warm and rainy - a perfect night to seek salamanders and other early breeding amphibians. So, I joined Laura Hughes to head to southeastern Ohio and interesting amphibian habitats. We were specifically seeking the rare (for Ohio) Eastern Spadefoot Toad, but no luck on that. We think it's probably still a bit early for the toad, but will be back to try again.

Laura knew of a fabulous vernal pool in the nearby Zaleski State Forest, and off we went to have a look. Immediately upon wading in, we saw scads and scads of Eastern Fairy Shrimp, such as above. These are amazing little creatures that are obligate denizens of vernal pools. By capturing some and placing them in small containers with clear water, I was able to make some images. As it was raining pretty hard nearly the entire time we were at the pool, I wasn't going to take my camera rig out in the field - I've learned this lesson the hard way. The shrimp were photographed under the refuge of my Jeep's back tailgate, then returned to the pool. 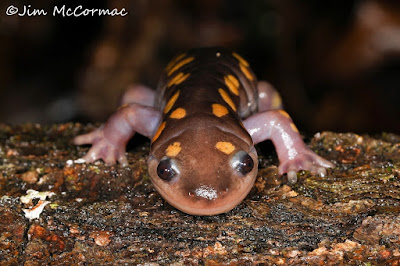 We were really hoping for salamanders, and weren't disappointed. There weren't many, but we saw a dozen or so Spotted Salamanders, Ambystoma maculatum. All appeared to be male, and some were already leaving the pond, marching overland away from the water. While some egg masses were already in the vernal pool, it didn't appear that the bulk of salamander activity had yet occurred.

So, if you are hoping to seek some salamanders yet this year - at least the vernal pool-breeding mole salamanders - there's still time.