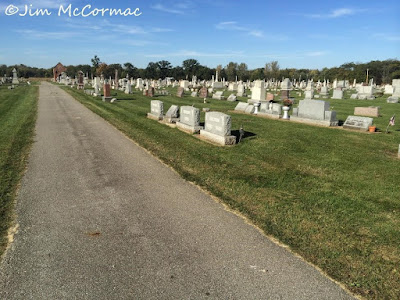 A rural Madison County, Ohio cemetery on a picture-perfect fall day. I was down hunting sparrows (photographically) around Deer Creek Reservoir last Monday, which is not too far from this place. As I knew there is a thriving colony of one of our most interesting mammals in the cemetery, I stopped by in the afternoon to visit. 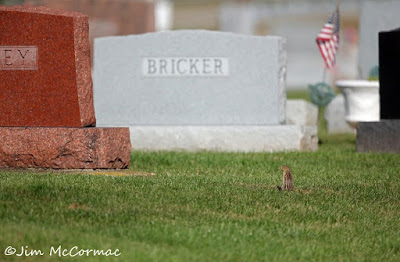 I was hardly through the gates when a Thirteen-lined Ground Squirrel, Spermophilus tridecemlineatus, scampered off the road's edge. After patrolling a bit, I found an area where multiple squirrels were in evidence, parked the car, and geared up for some ground squirrel photography. 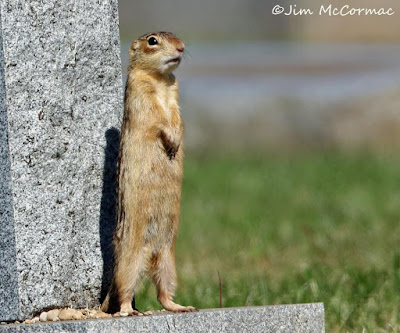 Shooting these highly alert and wary little beasts is not as easy as you may think. I have seen some in northern Michigan that have become quite habituated to humans and are readily approachable, but that's not the case with this colony. The squirrels are vigilant against potential threats, and your narrator apparently falls in this category.

As soon as I got out of the car, big lens and tripod in tow, sentries were taking up positions to monitor my every move, and if need be alert their fellows with high-pitched squeaking beeps. I had planned on shooting and watching the animals for perhaps an hour. That plan ultimately elongated into three hours. For most of these images, I had my camera down nearly to the ground, and often had to wait for a half-hour or more in one position before the squirrels overcame their concerns with me and began to move around. 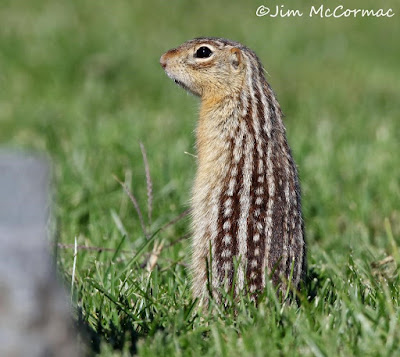 Several hours in close proximity to Thirteen-lined Ground Squirrels would do anyone good, I submit. The burly little rodents are incredibly charismatic, and great fun to watch. They resemble chipmunks on steroids, but are quite different even at a glance. An Eastern Chipmunk weighs about half as much, is noticeably smaller, and lacks the beautiful alternating pattern of stripes and dashes.

Habitat is considerably different, too. Chipmunks are forest species, and ground squirrels - at least all that I have seen in Ohio - shun woodlands and occupy wide-open spaces. They are closely related to prairie dogs and act the part. It's thought that the squirrels expanded eastward with the bison, probably during the last Xerothermic Period, which was about 5,000 to 8,000 years ago. Herds of bison are major game-changers when it comes to habitat manipulation, and they created vast open shortgrass plains perfect for the squirrels. While the bison are long gone, the squirrels persist, usually inhabiting human-maintained short grass haunts such as airports, golf courses, and cemeteries. 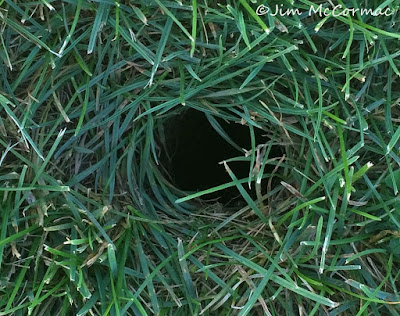 Ground Squirrels seldom roam far from a burrow entrance. The portals to their underground warrens are only a few inches across and often hard to see as they're partially concealed by vegetation. The hole usually drops down a half foot or so, then levels out and anastomoses into a series of tunnels and chambers. The squirrels live the majority of their lives in these subterranean warrens. They're strictly diurnal, and often only emerge on sunny days, at least for extended periods.

These beasts are furry Rip Van Winkles, and I'd bet they'll be down in the tunnels for the winter this week. Probably only the jumping mice rival them for extended hibernation, at least in this part of the world. With the coming of consistently cool weather, in October, they retreat to the burrows and don't emerge until April. A squirrel's normal active respiratory rate is up to 200 breaths a minute; when in hibernation mode that'll slow to about a breath every five minutes. 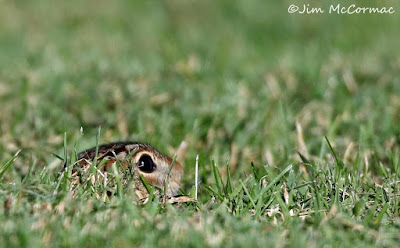 If an observer is far enough away, the squirrels pay little mind and go about their business. It's amusing to watch them forage, occasionally pop upright for a look around, and engage in high speed chases with one another.

However, when a threat looms, they're quick to race (8 mph bursts!) to a nearby hole. This can work to the photographer's advantage. When I would see one drop into a burrow, I'd quickly scramble into a good nearby position, partially concealed by a headstone if possible, and with the light to my back. After a few minutes, the squirrel would stick its head above ground. It would remain like that for several minutes, surveying its surroundings. 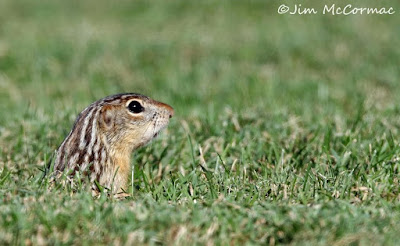 After a bit, it would proceed to Phase 2 of the Cautious Burrow Exit Strategy (CBES) and stick the upper half of its body above ground. This stage is usually accompanied by regular calls. Ground Squirrel talk consists of high-pitched beeping notes, often doubled but when excited they prolong them into a short series. The prolonged calls suggest a Sora's whinny call, but several octaves higher. The double-noted call greatly resembles the double-beep sound made by my Canon camera when it acquires focus. I found I could sometimes arouse their attention by beeping my camera. 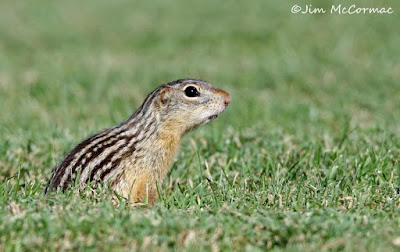 Phase 3 of the CBES involves ejection of nearly the entire body, then holding this position for several more minutes. Beeping whistles accompany this position, of course. 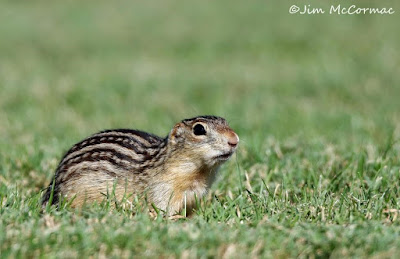 Finally, CBES Phase 4 - squirrel completely ejected and in classic scurrying posture. Still, it'll often remain like this for minutes more as it sizes up the situation. 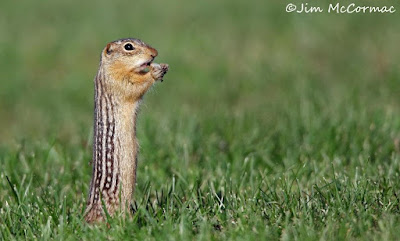 Once all is deemed safe, the squirrel moves into the grass and foraging continues. Ground Squirrels are classic omnivores, eating plenty of seeds and plant matter but never shunning tasty insects. When a large food item is found that will require a bit of time to consume, the squirrel often pops upright and eats while in the sentry position.

It took the fellow in the photo above a minute or two to finish his meal, and I did not realize what he (could be a she, I don't know how to tell) had until I reviewed my photos later. 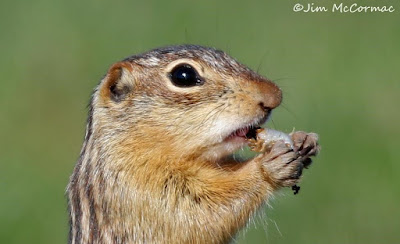 We crop in close to see the snack - it's a Japanese beetle grub! These invasive beetles are a scourge on turf grass, as they eat the roots, often killing extensive areas of lawn. I suspect a thriving colony of ground squirrels really keeps down the beetle population, and to my untrained eye the lawn in this cemetery looked pristine.

A great many Thirteen-lined Ground Squirrel colonies have been eradicated, especially when they take up residence in cemeteries or golf courses. There used to be a thriving colony in Columbus's Green Lawn Cemetery when I was a kid, and many (most?) visitors loved them. But the cemetery staff destroyed them long ago, probably due to concerns about their burrowing. My hunch is that the squirrels do more good than harm in these highly manicured landscapes but protecting them can be a hard sell.

That's why I don't want to name this cemetery. While I can't imagine that the people who maintain this place don't know they're there - I saw several dozen on this visit, sometimes six were in sight at once - no point in potentially drawing attention to them. However, if management does know they're there, AND intentionally allows these fascinating "prairie dogs" to remain, I would like to nominate them for some sort of medal, or perhaps entry into the Royal Order of the Ground Squirrel Benefactors.

Beautiful set of pics, exactly what I envision whenever I go looking for 13-liners.