The Most Famous Bear in the World Belongs to Us 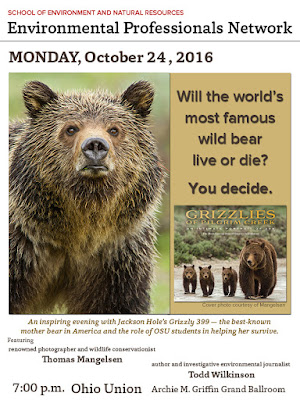 Next Monday evening, October 24, Thomas Mangelsen and Todd Wilkinson will present a program on Yellowstone's Grizzly Bears at Ohio State University's Ohio Union. Registrants already number over 900, but it's a big room and if you wish to go, CLICK HERE for details.

Wilkinson penned the following piece about these bears, and after reading it I asked David Hanselmann, the event organizer, if he could secure permission for me to run it here. Thanks to Todd Wilkinson for agreeing, and David for working things out. Read on...


In Bozeman, Montana, I live directly across the street from a pair of proud Ohioans, one of whom is a man counted among the greatest science writers in America. David Quammen, who grew up in Cincinnati, wrote the entire May 2016 edition of National Geographic magazine about Yellowstone National Park and why it matters for all citizens in this great country of ours.


I was asked to write captions for the exquisite photographs accompanying Quammen’s piece. That edition of National Geographic is today the most widely read in the history of the legendary yellow magazine.  What this affirms is not only the love affair we Americans have with our first national park, but why Yellowstone remains, amid all of the present turbulence in our society, a point of common pilgrimage.


Consider this: 94 percent of us who travel to Yellowstone have desires of seeing a grizzly; we want to catch sight of bears more than we desire to see Old Faithful Geyser erupt.


Quammen and I have had many spirited street-side conversations about this phenomenon, many of our discussions centered on the plight of the Yellowstone grizzly bear population.  It is the  focus of my new book, “Grizzlies of Pilgrim Creek” and the subject of a public presentation being held at Ohio State University on Monday evening, October 24.


I hope you can make it, for “A Night With Mother Grizzly 399, the Most Famous Bear In The World” will include an appearance by noted American nature photographer Thomas Mangelsen who has trailed Grizzly 399 over the last decade in her life and death struggle for survival. His images are astounding.


Quammen, in his NatGeo piece, also organized his narrative around wandering grizzlies.  The reason: all of us are intrigued by these largest of carnivores, still persisting in the wild backyard of our country.  We are simultaneously left in awe and tinged with inner fear when thinking about these magnificent animals.


But more than that, here’s something that often escapes recognition among Ohioans—the grizzlies of Greater Yellowstone and the federal public lands they inhabit belong to you.  Yes, they are part of our birthright as citizens and their common ownership is something that factors prominently into what I call “capital D Democracy”—which is the idea that together, no matter where we live, we are stakeholders.


Right now, there are attempts under way in Congress to divest American citizens of public lands they own and hand over management to western states. Because the states cannot afford to manage these lands, which are vital for supporting public wildlife, many of these awe-inspiring landscapes very likely could be sold off to private interests.


In addition, there is a push underway to remove federal protections for grizzlies and subject the bear population to controversial sport hunting after 41 years of cease fire. Essentially, Grizzly 399, who spends much of her life in Grand Teton National Park and is known to millions around the globe, would be vulnerable to trophy hunters just as Cecil the lion was in Africa.


Mangelsen and I will talk about this emotionally-charged conundrum in our talk at Ohio State.  But foremost, we’ll emphasize this:  Caring for our national natural heritage is not—and should not—be treated as a partisan issue. It was, after all, Republican President Theodore Roosevelt who championed the noble concept of public lands and public wildlife conservation as a gift to all Americans that extends forward into the future beyond our own lives.


Democratic lawmakers, who commune with the great outdoors just as much, have made equal contributions to ensuring rare charismatic animals like grizzlies (our own unique versions of imperiled African lions and Bengal tigers) persist because we are willing to share the space they need to endure.


Famous grizzly mother 399 and her extended family of bruins belong to you, me, all of us.  That’s something worth celebrating, protecting and defending.  I know Ohioans care because I live across the street from two natives of the Buckeye State who express it every day.  You’ve played a mighty role in recovering species like the bald eagle and your voice matters with wildlife in the West.

Todd Wilkinson, who makes his home in Bozeman, Montana, has been a professional journalist and award-winning author for 30 years. His stories have appeared in publications ranging from National Geographic to The Washington Post.
at October 20, 2016

Nice feature. Mangelsen's work is amazing! See you there....