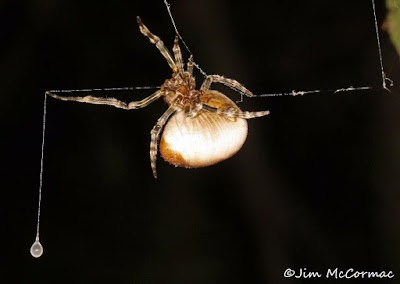 A toadlike bolas spider holds her silken weapon: a sticky ball she dangles and flings at approaching moths.

A gaucho is a cowboy of the South American pampas. Gauchos are skilled horsemen and effective wielders of an odd weapon known as a bolas. The bolas is a stout cord to which they affix a heavy ball or balls. When hurled accurately, the bolas ensnares the legs of quarry and trips it up.

A group of spiders has been flinging bolas lines far longer than the gauchos.

The bolas spiders comprise a group of about 50 species, all of which occur in the Americas. Thirteen species are found north of Mexico, and four occur in Ohio.

Finding a bolas spider is always a big deal. They’re rare and easily overlooked. It wasn’t until Sept. 3 that I finally clapped eyes on one of these bizarre spiders.

I and others were conducting nocturnal field work in The Nature Conservancy’s sprawling Edge of Appalachia Preserve in Adams County. Suddenly, a roar went up from David Hughes, who is a firefighter and expert photographer. He had found a toadlike bolas spider, Mastophora phrynosoma.

During the day, the toadlike bolas spider rests atop a leaf, looking like an amorphous glob of fungus or gooey bird dropping. From certain angles, it looks rather toadlike. Presumably, would-be predators ignore such an unpalatable-looking mass.

Come dusk, the spider spins a few silken guy wires under leaves and prepares to hunt. She hangs from her support lines and crafts her sophisticated weapon. By rubbing a silken line against sticky secretions generated by her spinnerets, the spider forms a gluey ball.

When all is ready, she suspends the sticky bolas from a silken strand and holds the line with one of her forelegs. The look is much like a fisherman holding a baited rod.

She then emits a fragrance that mirrors pheromones secreted by a certain group of female moths. Eventually a male moth will detect this pseudopheromone and fly in to investigate.

As soon as the amorous moth comes within striking range, the spider flings the bolas and snares the moth. The duped victim is reeled in, dispatched and eaten.

The much-smaller male spiders and young females do not hunt with a bolas. Remarkably, they produce a scent that attracts tiny moth flies, which are seized and eaten.

Lots of weird things transpire under cover of darkness.

Naturalist Jim McCormac writes a column for The Dispatch on the first, third and fifth Sundays of the month. He also writes about nature at www.jimmccormac.blogspot.com.
at October 03, 2016

With six small diamonds for his eyes,
He walks upon the Summer skies,
Drawing from his silken blouse,
The lacework of his dwelling house.

He lays his staircase as he goes,
Under his eight thoughtful toes,
And grows with the concentric flower,
Of his shadowless, thin bower.

His back legs are a pair of hands,
They can spindle out the strands,
Of a thread that is so small,
It stops the sunlight not at all.

He spins himself to threads of dew,
Which will harden soon into,
Lines that cut like slender knives,
Across the insects' airy lives.

He makes no motion but is right,
He spreads out his appetite
Into a network, twist on twist,
This little ancient scientist.

He does not know he is unkind,
He has a jewel for a mind
And logic deadly as dry bone,
This small son of Euclid's own.