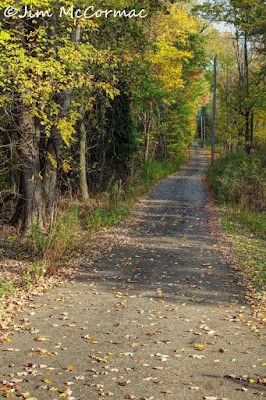 Last Saturday evening, I was the invited speaker for the The Native Plant Society of Northeastern Ohio's annual soiree, which was held at the Pine Lake Trout Club near Chagrin Falls. That was a great time and I appreciate the group's hospitality.

Not one to miss an opportunity, I headed up that way a bit early, and arrived at the aforementioned preserve near Ravenna well before the sun rose. 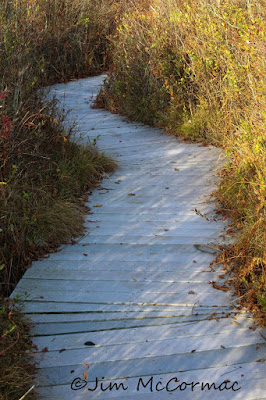 A 1/2 mile or so of planking makes access to the bog easy. And I can tell you, were it not for this boardwalk, one would truly be bog-stomping. The place is essentially a massive sponge, and the possibility of stepping through the mat and into water much deeper than expected would be an ever-present risk.

Years ago, Greg Schneider and I waded all through this place, seeking a tiny aquatic carnivorous plant known as Two-scaped Bladderwort, Utricularia geminiscapa. It had never been recorded in Ohio, but we figured it might occur at this place. And we found it, growing in small pools on sections of the bog mat that bounced like a trampoline. It was truly tough going, and it's probably a minor miracle that neither of us fell through the mat, to be unearthed centuries later as "bog mummies". 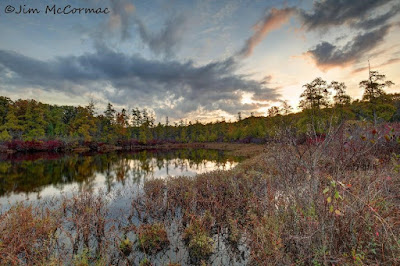 Capturing the beauty of the bog at first light was my primary mission. To step into this place is to be transported hundreds of miles to the north, where glacial kettle lake bogs are still common. They once were in northeastern Ohio, too, but most have long succumbed to the forces of vegetative succession. 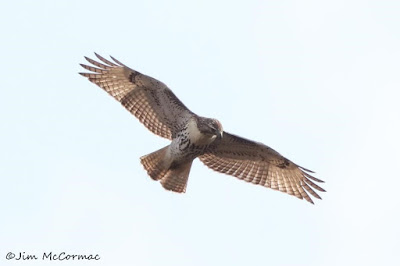 A largely undisturbed oasis like Triangle Lake is full of interesting flora and fauna. I wasn't out of my car in the parking lot before I heard the mellow chuck-chuck notes of Hermit Thrushes. Kinglets of both species worked the shrubbery, and Yellow-rumped Warblers were everywhere. Cedar Waxing flocks darted about and woodpeckers of six species made themselves known. At one point, a Northern Flicker dropped into a berry-laden Poison Sumac treelet eight feet from my position, and began scarfing down fruit while eyeing me with some suspicion.

Not long after daybreak, one of the local Red-tailed Hawks took to the air, and it was in sight as much as not for the remainder of my time, tracing lazy circles overhead. After the golden light of dawn had passed, I returned to the car and got my telephoto lens, found a semi-hidden vantage point and began to work the birds. 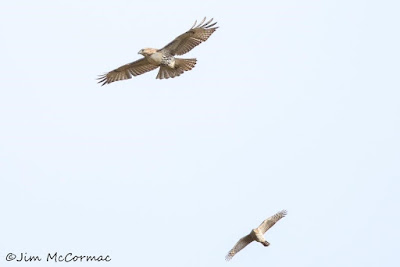 Early on, I had noticed a Sharp-shinned Hawk that rose on the thermals and would reappear from time to time. Judging by its behavior, I figured it, like the red-tail, was the product of local breeders. Well, as luck would have it, I was drawing a photographic bead on the red-tailed when suddenly the "sharpie" came in towards the larger hawk at speed.

If you're not wise to the ways of Sharp-shinned Hawks, they are feathered bundles of testosterone - one of the most aggressive birds there is. They love to attack and strafe larger birds, especially other raptors. The sharpie in these photos is a young female, and she's about one-third larger than a male would be, the latter being not much larger than a Blue Jay. Nonetheless, she is dwarfed by the red-tail, which outmasses her by 5-6 times. 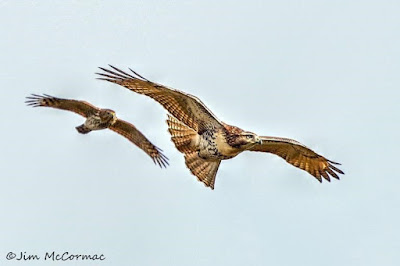 The little hawk made a few half-hearted strafes of the larger bird, but wasn't as persistently aggressive as I've seen them be. I figured that if both were the spawn of local breeders, they were pretty used to each other by now. This is probably the two hundredth play-fight the poor red-tail has probably had to endure from the crazy little raptor. You can almost see it rolling its eyes and thinking "great! this little jerk again!" 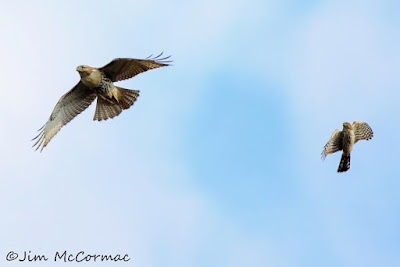 After a few passes, the sharpie angled off to wreak havoc elsewhere. But I certainly appreciated the show.