A Barred Owl stares, rather inscrutably, at your narrator. It is one of only two owls that occur in Ohio with dark eyes.

A webinar is Internet-speak for web conferencing; connecting an audience and a speaker or speakers via their computers. One can participate and never leave the comfort of home. I have the privilege of presenting a webinar on owls in the near future, and you are invited.

An Eastern Screech-Owl peers sleepily from his hole in a box-elder tree. I don't know if he has a computer in there, but you do, or you wouldn't be reading this.

The Ohio Bird Conservation Initiative has launched a monthly series of webinars, and I'm at bat on Wednesday, January 15th. The webinar runs from noon until 1:00 pm. To register (a requirement), CLICK HERE. It's free, and easy. 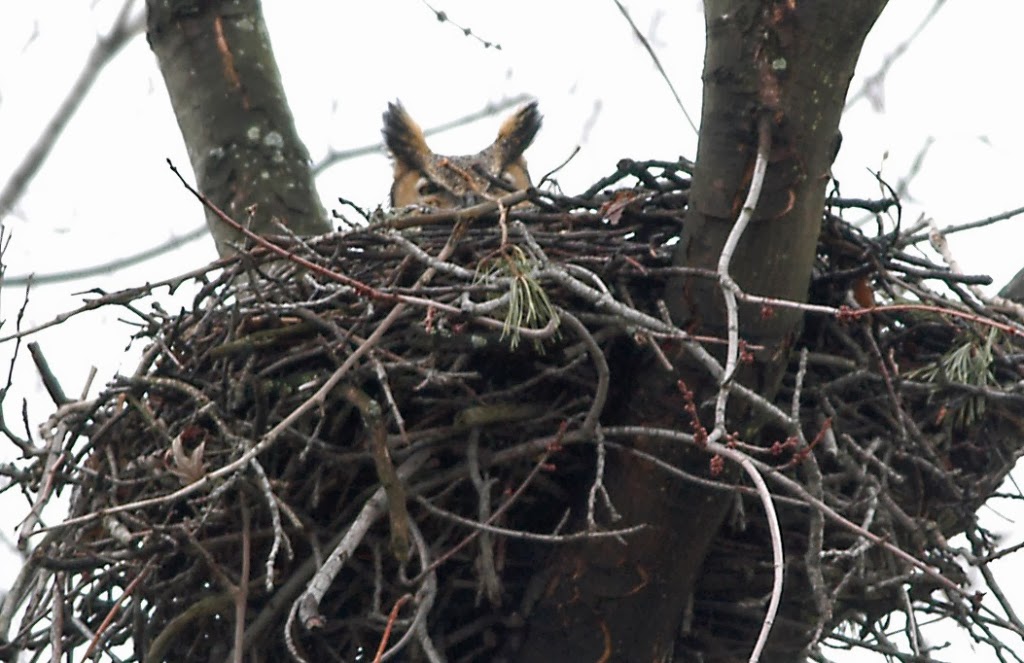 The fierce tufted visage of a Great Horned Owl glares from atop a Red-tailed Hawk nest. Great Horned Owls often appropriate hawk nests, and tough luck to the legitimate homeowner. These winged tigers pretty much get what they want.

Our webinar is visual and and audio - I'll be giving my program "Owls of Ohio" complete with numerous photos and other information. It's kind of like tuning into a radio program, but this one has images.

A Long-eared Owl cranes its neck 180 degrees to regard the photographer. Linda Blair has nothing on these beasts, which have double the number of neck vertebrae as a human, hence the seemingly supernatural flexibility.

The webinar will be much more than just Ohio's eight regularly occurring owls (and four rarities). Owls are one of the most interesting groups of birds, and people have long been smitten with them. I will go into some of the reasons for that popularity, which dates back to the dawn of written communication, and the factors that make owls such formidable predators.

Yes, the first word that popped into your mind was "cute" or some such synonym thereof. A white-footed mouse would disagree. To small rodents, this Northern Saw-whet Owl represents a winged terror; the Grim Reaper incarnate.

Again, if you want to take a pictorial ride through the world of owls, full of facts and photos, just CLICK HERE. I'll hope to interface with you on January 15th!