A much reviled bug

An entomophobe I am not, but I utterly despise this bug. It is the Brown Marmorated Stink Bug, Halyomorpha halys, and you may also know the ugly pest. These flattened wretched annoyances have a real knack for entering homes, seemingly being able to pass through the thinnest of slits. Come fall, in they come, and into hiding they go. Periodically, all winter long, the warmth of the home's innards coupled with lights will draw them out of wherever they lurk. My house is relatively new and nearly tight as a drum, or so I thought. Nonetheless, I find one of these stinkbugs nearly every day. I have no idea where they're roosting - maybe the attic, since the majority that I find are upstairs.

When a BMSB enters the room, there really is no rest until it is dispatched. They're big enough that you'll not be at peace knowing it is crawling about, and when they fly, the loud irritating drone is sure to make you ill at ease. Watch 'em when you grab 'em - squeeze too tight, and they can release a noxiously aromatic spray.

This is yet another invasive species courtesy of Asia. They first turned up in Allentown, Pennsylvania in 1998, and are now well in their way to conquering America. BMSB's have appeared in something like 33 states thus far. I first starting noticing them around here - Columbus, Ohio - three or so years ago, and they have increased tremendously since then. Besides being a six-legged source of irritation when they come inside with us, the bugs are real threats to fruit crops. They are hemipterans, and use their sucking mouthparts to pierce orchard crops and about any type of fruit, apparently, thus doing great damage. 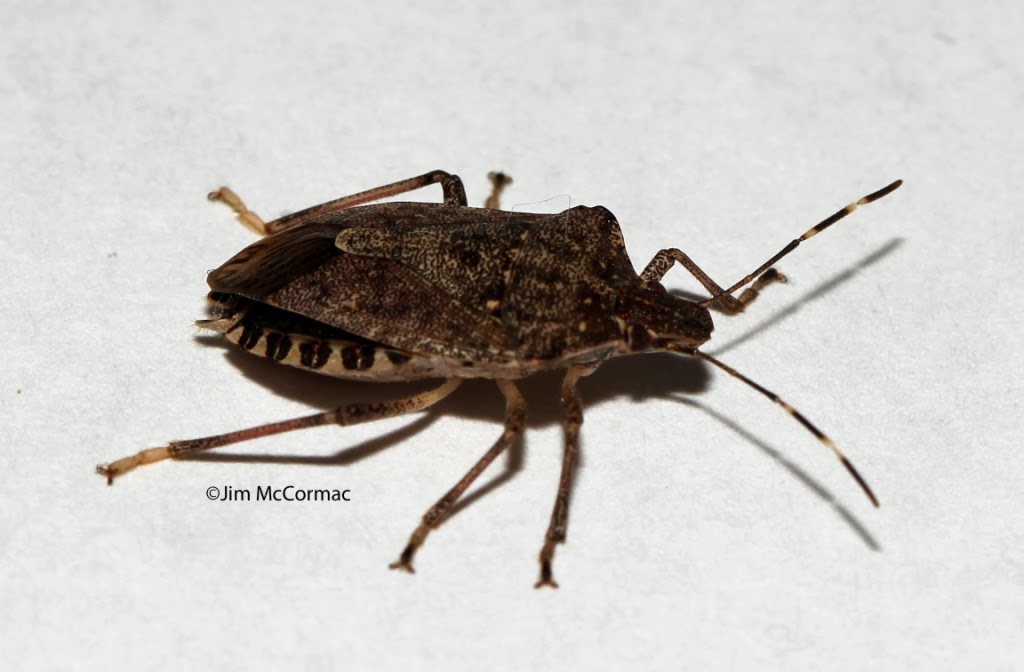 Conventional wisdom has it that Brown Marmorated Stink Bugs do not bite. Look around the web; just about every fact sheet says so.

I will challenge that, admitting that my evidence to the contrary is circumstantial.

Several weeks ago, I returned after a long day, and settled down for a half-hour nap before going back at it. About 20 minutes after nodding off, I awoke to feel flushed all over, and completely broken out in hives. Also, as I came to, I heard a scrabbling on the pillow next to my head, and there was one of these nasty beasts.

I am allergic to nearly nothing, save a nip of poison ivy if I really get into it on a hot day. Therefore, having an outbreak of hives was a very strange, scary, and new sensation. I also felt slightly nauseous and a bit like I had the flu coming on. Well, all of these unpleasant symptoms passed within the hour, and I was more or less back to normal. With the exception of a rather small but nasty wound on the back of my shoulder that is only now fading. Of course, I wanted to know what caused these conditions, and the stupid stinkbug was my primary suspect.

Stinkbugs have mouthparts modified into a strawlike tube, and this structure is what they use to puncture the skin and pulp of fruit and tap its juices. While I am quite sure the BMSB does not make a habit of feasting on humans, I see no reason why one couldn't stick a person if it were accidentally pinned or trapped, just as spiders will bite reactionarily if mishandled.

Furthermore, some Hemipteran insects, such as kissing bugs, do bite people, and apparently the aftereffects can include some of the same symptoms that I described above.

So, I cannot conclusively prove that one of these blasted stink bugs actually bit me, but there is some circumstantial evidence that suggests it. Bite or not, I still hate the things and hope that some native predator rises up and vanquishes them from American soil.

I don't think we are seeing these yet in NE Ohio but I've encountered them consistently when visiting family in Gettysburg, Pa where they are hated by all the surrounding orchards for blemishing the fruit! I second your dislike!!

Beware, you "stupid stinkbug!" You have been warned! Great article, Jim!

I have a variety of stink bug (not sure of the proper name), but they are black and thin-bodied. I have never seen a BMS in my home... yet...

What are the predators of our native stinkbugs? Why don't they favor these too?

If it happens again, Benedryl and consider the ER.

I feel your pain...actually I smell it more. We have these evil doers in our shop in Hudson. They pop out of our stock, and fly(amazingly poorly) at your face.
I like to put them outside and let them freeze.
Does that make me a bad person?