Ah, downtown Cleveland in mid-winter. If you like birds, it is a destination point. Here, a freighter steams out of port off Wendy Park and into icy Lake Erie. Legions of gulls, roiled aloft by the ship's passage, create a cloud. Gulls are a big part of the allure. Amongst the throngs of Herring and Ring-billed Gulls are rarer species, and picking through the masses to find them is actually fun for some of us.

I was up in Cleveland two weekends ago, and my first port of call was the legendary power plant at East 72nd Street. That's the plant on the left; the busy State Route 2/90 expressway is between the plant and your picture-taking narrator, and Lake Erie is on the right. The plant pumps warm water into the lake, and thus keeps a patch open and ice-free. The unfrozen oasis often lures mobs of gulls and other interesting waterbirds.

Note the plant's large stack - the farthest to the left.

Peregrine Falcons often roost on the aforementioned stack, and here we have one roaring in, while its mate watches from its perch on the railing. The perched bird is just left of the red light. These falcons don't miss a trick, and see all that is spread beneath them: Birders, ducks, gulls, everything.

Anyway, when I arrived at E. 72nd around 9 am, other birders were already assembled and glassing the waters. No surprise; this spot almost always has birders.

It's been cold - MIGHTY COLD - here in Ohio, and for the most part, Lake Erie has become choked with ice. This is the open lead created by the power plant's warm effluvia, and when conditions are like this the birding is great. Oftentimes the birds are nearly at fingertip range, which makes for great photography. Picture-taking aside, it is just great fun to watch the masses of gulls wheel and fight, fish and squabble. It is also pleasurable (to some of us) to sort through them looking for rarer beasts such as Glaucous, Iceland, and Thayer's gulls.

Cleveland's most famous gull in residence, an immature Black-legged Kittiwake, Rissa tridactyla.This gorgeous specimen has been present at E. 72nd for several weeks, and it was quite nearly the first bird that I saw upon my arrival. Shortly after exiting the car, Larry Rosche waved me over and there was the kittiwake, fishing in the small opening. One might argue that an immature kittiwake bests even the suave adults (CLICK HERE for adult kittiwakes) in the looks department. The bird is an artistic study in patterns of black, gray, and white. The bold W-pattern on the wings is offset by a sooty neck collar and inky tail band, creating an unmistakable appearance.

Black-legged Kittiwake is quite the rarity in Ohio, with a relative handful seen each year. Nearly all are in November and December, and most are non-lingering flybys. Once in a while one tarries into winter, but seldom are they as cooperative as this bird is. Many birders have seen it, and the bird has made for more than a few new checks on life lists. I spent nearly two hours at this spot, in total, and ran into lots of birders, including many seldom seen friends SUCH AS THESE.

The kittiwake was a blast to watch. It nearly always stayed in the small sphere of open water, and at times came too close to photograph. At times it was the only bird working the waters. Kittiwakes like fish, as does any self-respecting gull, and the bird made frequent shallow plunge-dives such as this.

Up it pops, with a shell-shocked emerald shiner. These little silvery minnows seemed to be the dietary staple of the kittiwake. Don't come back as an emerald shiner in the tail waters of the power plant at East 72nd Street in wintertime Cleveland. You may be fated to be snatched unexpectedly from the tranquil depths, rudely swallowed whole and dissolved by gastrointestinal acids, then catapulted back to the waters as a powerful fecal explosion of guano from a kittiwake's posterior.

These dives, which always or at least nearly always culminated in the capture of a shiner, were executed with great rapidity. From striking the water, gagging down the sushi, and taking flight all took place within a half-minute or so. Why the rush? It's best to be in a situation where all of your senses can be focused on your surroundings, and that's hard to do when preoccupied with catching minnows. 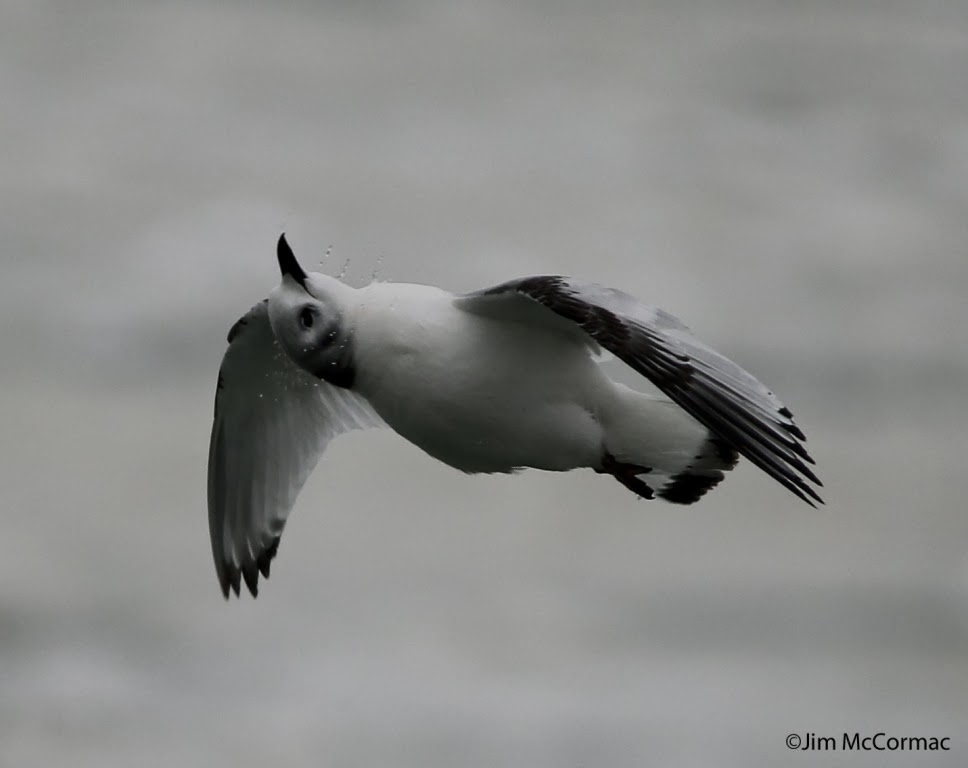 Shortly after getting airborne, the kittiwake vigorously shakes itself free of water droplets. I didn't Photoshop this image - just caught the bird in mid shake with a very fast shutter speed. Enlarge the photo by clicking on it and you'll see the spray of droplets around its head. 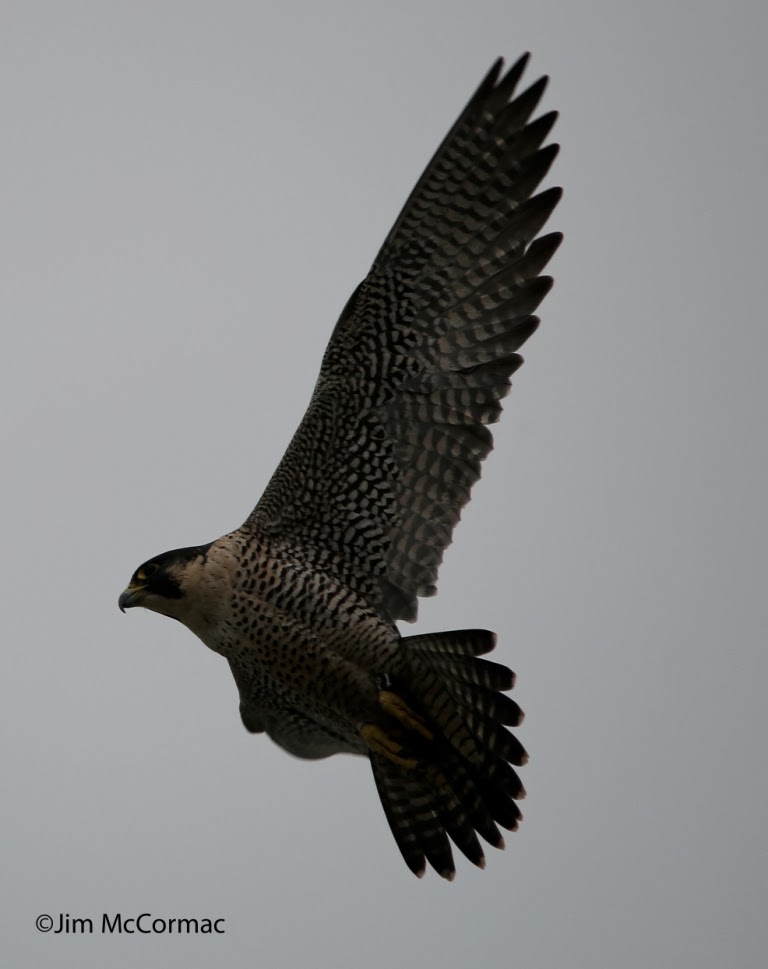 With an unexpected rush, this Peregrine Falcon suddenly shot right over the heads of the assembled birders, snapping all of us from our kittiwake reverie. When these big powerful falcons burst into a pack of birds, it's almost as if shock waves from the predator alters the immediate cosmos. You can almost feel the big bird's energy, and its presence triggers instant pandemonium. I managed this one decently sharp image as the falcon briefly hovered nearly overhead, its sights apparently set on our kittiwake. Apparently the lone kittiwake hunting in the patch of water was too much for the tower-roosting falcon to stand, and it bombed down and tried its best to exert its will and demonstrate that Peregrine Falcons sit atop the avian food chain.

After an excited chase, the falcon departed the hot waters sans kittiwake, and rocketed out towards the gulls roosting further out on the ice. Its progressive was marked by clouds of gulls swirling aloft, and eventually the falcon singled out one of the few Bonaparte's Gulls in the area. The raptor harried the small gull and eventually snatched it and headed back to shore. Through our optics, we watched as the gull struggled valiantly, its wings flapping wildly. The wildly struggling gull eventually proved too much for the falcon to grasp, and it dropped it. As if upset by this failure, the falcon raced around the gulls like a fighter jet, creating a massive uproar, before eventually soaring back to its lofty perch atop the power plant's tower.

All in a day's birding on the Cleveland lakefront.
at January 22, 2014

Your writing is a joy to read and I love your photography, Jim! Thank you!

I am soooo jealous of your Peregrine photo! I'm sure we'll see you again soon, thanks for the plug!