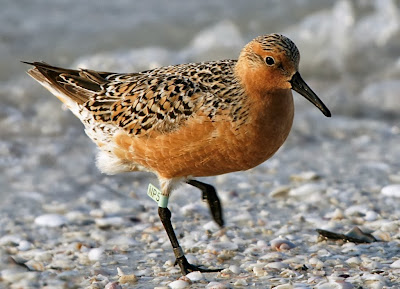 The U.S. Fish and Wildlife Service today released a proposal to list the rufa red knot (Calidris canutus rufa), a robin-sized shorebird that annually migrates from the Canadian Arctic to southern Argentina, as a threatened species under the Endangered Species Act. The proposed rule will be available for 60 days of public comment.

“The rufa red knot is an extraordinary bird that each year migrates thousands of miles from the Arctic to the tip of South America and back, but – like many shorebirds – it is vulnerable to climate and other environmental changes,” said Service Director Dan Ashe. “In some areas, knot populations have declined by about 75 percent since the 1980s, with the steepest declines happening after 2000. We look forward to hearing from the public with any new scientific information as we consider the proposal.”

After an exhaustive scientific review of the species and its habitat, Service biologists determined that the knot meets the definition of threatened, meaning it is likely to become in danger of extinction in the foreseeable future throughout all or a significant portion of its range. The knot, whose range includes 25 countries and 40 U.S. states, uses spring and fall stopover areas along the Atlantic and Gulf coasts. Changing climate conditions are already affecting the bird’s food supply, the timing of its migration and its breeding habitat in the Arctic. The shorebird also is losing areas along its range due to sea level rise, shoreline projects, and development.

A primary factor in the recent decline of the species was reduced food supplies in Delaware Bay due to commercial harvest of horseshoe crabs. In 2012, the Atlantic States Marine Fisheries Commission adopted a management framework that explicitly ties horseshoe crab harvest levels along the Atlantic Coast to knot recovery targets. The Service’s analysis shows that although the horseshoe crab population has not yet fully rebounded, the framework should ensure no further threat to the knot from the crab harvest.

International, state and local governments, the conservation community, beachgoers and land managers are helping ensure knots have safe areas to winter, rest and feed before or along their journey to the Arctic. These partners assist knots in a variety of ways, including managing disturbance in key habitats, improving management of hunting outside the U.S. and collecting data to better understand the knot.

In many cases, the knot’s U.S. coastal range overlaps with those of loggerhead sea turtles and piping plovers, as well as other shorebirds. Conservation actions underway to benefit those species’ coastal habitats will also benefit knots.

The bird is one of the longest-distance migrants in the animal kingdom. With wingspans of 20 inches, some knots fly more than 9,300 miles from south to north every spring and repeat the trip in reverse every autumn. While migrating between wintering grounds at the southern tip of South America in Tierra del Fuego and breeding grounds in the Canadian Arctic, the shorebird can be found in groups of a few individuals to thousands along the Atlantic and Gulf coasts.

Studies in Delaware Bay show knots nearly double their weight at this last major spring stop to make the final leg to the Arctic. One bird, called B95 from his leg flag, has been nicknamed the Moonbird, as researchers estimate his 20 or more years of migrations are the equivalent of a trip to the moon and at least halfway back.

Other knot populations winter in the southeast U.S., northwest Gulf of Mexico and northern Brazil. New information shows some knots use interior migration flyways through the South, Midwest and Great Lakes. Small numbers (typically fewer than 10) can be found during migration in almost every inland state over which the knot flies between its wintering and breeding areas. Other subspecies of red knot, including C.c. roselaari that migrates along the Pacific Coast to breed in Alaska and Wrangel Island, Russia, are not included in this proposal on the rufa red knot.

As required by the Endangered Species Act, the Service plans to publish a separate proposed rule identifying critical habitat for the red knot before the end of 2013 and expects to make a final decision on both rules in 2014.

The proposed rule, in response to a court-ordered deadline, is available for public comment through November 29, 2013.The agency requests a variety of information on the knot, from population trends to genetics and distribution.

Comments may be submitted through the following methods:

It's about time! Fingers crossed this turns out favorably!!