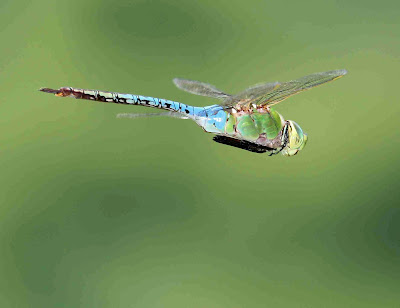 An interesting shot of a male Green Darner, Anax junius, in flight, courtesy of Dave Lewis. Props to Dave; freezing one of these fast-moving insects with the camera is not easy.

Ohio, and surrounding states I'm sure, have experienced a blitzkrieg of migrant dragonflies in the past few days. I've received about a dozen reports at work, a few more here at home, and have seen reports of dragonfly swarms on Facebook and other places. The vast majority of these dragonflies are the highly migratory Green Darner, as shown in Dave's shot above. These dragonflies are headed to points south, and pushing through in vast inestimable waves in front of the coming cold front.

I penned an article about this time of year in 2011, for my employer the Ohio Division of Wildlife. That column made its way to a number of newspapers, and is still findable on the net, apparently - it was the catalyst for a number of the reports that I received. Following is that piece, which goes into more detail about Green Darners and dragonfly migration. It is just as relevant to the current flight as it was a few years ago.


Invasion of the dragonflies


A fantastic insect invasion has been occurring recently. No worries – a plague of locusts hasn’t descended, nor are killer bees overrunning .


Our visitors are dragonflies: common green darners, Anax junius. Large swarms of these jumbo fliers have been reported from numerous locales and elsewhere in the in the past week or so.


Common green darners are easily recognized. They are one of the largest of the 160+ dragonfly species that have been found in . From stem to stern, a good-sized darner can measure 3 ½ inches, with a wing span of four inches. The thorax (main body) is a distinctive pea green. Males have a turquoise-blue abdomen (tail); in females the abdomen is rusty-brown.


This species is a common inhabitant of ’s ponds and wetlands, and is found in all 88 counties. Like other dragonflies, their larvae – nymphs – are strictly aquatic. The bizarre, alien-looking nymphs remain under water for a year, hunting small animal life. When tripped by some internal alarm clock, the nymph emerges from the water shortly after dusk, climbs a plant, and begins an amazing transformation. The nymph’s husk is slowly split open by the young adult – termed a teneral – as it pushes its way out. Once it has broken free of its larval shell, the teneral darner quickly hardens and expands. By daybreak, the transformation into an adult dragonfly is complete and the green darner is ready to take flight.


And take flight they do. Incredibly powerful flyers, green darners spend much of the daylight hours on the wing, jagging about at impossible speeds as they snatch small flying insects from the air. While gnat-sized bugs form the bulk of their diet, the burly dragons can take down much larger fare. When opportunity allows, they’ll grab large horseflies, bees, and lesser dragonflies. They have even reported to take hummingbirds!


A big mystery shrouds the common green darner. This is one of our highly migratory insects, as is the monarch butterfly. However, the movements of green darners are not nearly as well understood as those of the monarch, and scientists are still unraveling the secrets of darner migration. In late summer, massive “flocks”, perhaps better called swarms, are sometimes seen. This year, darner swarms have seemingly been more numerous than usual, with many scattered reports.


It is a striking sight to witness hundreds or even thousands of these large dragonflies swirling about. Sometimes they are seen high aloft, moving together on a steady southward trajectory. On other occasions, swarms descend to low levels and actively feed over meadows and other open areas.


Where are they going? No one is sure, but it’s possible that the darners are moving to warmer climes of the southernmost U.S and . Green darners also appear to migrate back north in the spring, much as birds do.

A lot remains to be learned of dragonfly migration, and observations of large swarms are helpful to researchers. If you have witnessed a dragonfly swarm, please report it to McCormac at the Ohio Division of Wildlife: jim.mccormac@dnr.state.oh.us or 614-265-6440. Please note the date, time, location, and ideally an estimate of the number of dragonflies.

What a coincidence. I left my house at 8 am on the way to work this morning, and saw a bunch of large insects swirling around my Clintonville front yard. Looking closer, I said, Holy Cow, those are all dragonflies! I watched for a few minutes before heading to work. What a nice way to start a day at the office.

Coincidence indeed. And I just now spotted one in downtown Cleveland, ahead of the storm front moving in from the lake (9:17 PM Thursday evening).

Thanks Jim!
It's easy to get a shot when he's trying to fly INTO the wind. He seemed to be frozen in space and I lucked out...now if only I could get a bird like that...

I don't think mine are green darners. Maybe. But I can see the flash of blue and they are big. Hundreds around my house and barn. Some in the pasture field. I live at the beginning of Alum Creek in Morrow County. It's like a miracle. Happened five years ago about this time of year. It's about 7:20 now and the air is full of them. It's a great day to be alive.