The fabled Conneaut Harbor, Ashtabula County, Ohio. John Pogacnik and I led a field trip here about a week ago, and this is part of our group, scanning for birds. This harbor was created by walling off part of Lake Erie, and over time a massive sand spit formed. Conneaut can be a gold mine for birds, and scores of rarities have turned up here over the years. It seems that just about anything with wings drops in, if only for a few minutes.

Conneaut Harbor, especially on a nice day, can be a bit of a madhouse, as people also flock to the sands. Those large airborne things in the backdrop are the kites of windsurfers. Other people are walking about, and dogs are usually roaring around, sometimes chasing birds. The worst are the hicks in ATV's and 4 x 4's tearing up the area and spooking everything in the harbor. Fortunately none of the latter crowd were in evidence on this trip.

We hadn't been out of the van for a minute and someone pointed to a small shorebird working the waterline. Baird's Sandpiper! An auspicious start to the trip, indeed. Not many Baird's pass through Ohio in their long transit between breeding and wintering grounds. Most birds move to the west of here, and although this beautiful sandpiper is not a rarity, it is greatly outnumbered by many of our other migrant shorebirds.

This Baird's Sandpiper, like nearly every one of them that steps on Ohio mud, is a juvenile. The youngsters can be distinguished by their fresh, bright plumage and pale feather edgings which create a distinctly scaled appearance. Our bird was born only a few months before we saw him, spawned from a nest on the tundra in the highest reaches of the Arctic.

Unfortunately, this animal has an issue with its wing. As can be seen in the photo, its right wing is dragging and obviously injured, and this may not bode well for its survival. Yet we saw it leap airborne and make short flights with no seeming difficulties, so we can hope for the best. Its trailing wing does allow us to see a distinctive feature of Baird's Sandpiper: very long wings that project beyond the tail, and give the bird a slender attenuated look. These are the wings of a champion long-haul migrant. 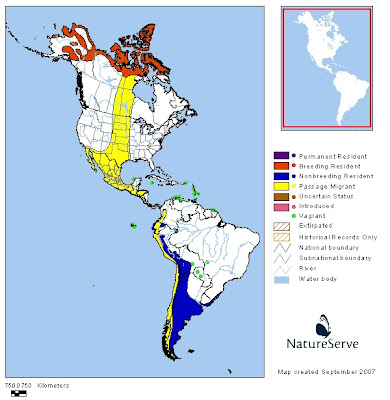 This map lays out the stupefying, nearly unbelievable annual peregrinations of the Baird's Sandpiper. These animals breed as far north as one can go, and then travel to the other end of the globe - from one end of the world to the other. The adult birds, which leave the breeding grounds a few weeks prior to the juveniles, make the transit with great rapidity; in as few as five weeks. The young birds make the same amazing journey, and do it without a guide - they rely solely on their built-in navigations units. And to think, some of us can get lost in the grocery store!

Places such as Conneaut Harbor, although certainly not pristine, serve as vital way stations for shorebirds engaging in their fantastic journeys. Mudflats are fuel stops; places where sandpipers and plovers can gorge on tiny mud-dwelling animal life and build the fat deposits that will sustain them on long flights. A Baird's Sandpiper weighs only 35 or 40 grams. That's less than a third of what your new iPhone 5 weighs. Little birds that fly long distances need a lot of food, and plenty of stopover places to find it.

Here's hoping the bird featured here successfully makes its way to Argentina to join the rest of its tribe.
at September 11, 2013