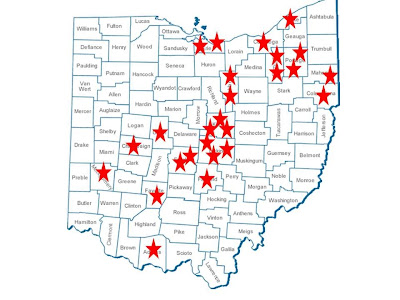 I received a fair number of reports of dragonfly swarms, based on the last blog post, and other stuff that I've written about this phenomenon. The map above shows locations of the last few days' reports, and nearly all observers indicated swarms of "dozens", but more often "hundreds" or "thousands". From the evidence at hand, the vast majority of dragonflies involved were Common Green Darners, Anax junius. Most reports were made in the waning hours of the day - often near twilight.
These mapped locales represent but a fraction of the reports that were made. I saw numerous mentions of dragonfly swarms on Facebook and elsewhere. And two respondents to me live in Illinois, and saw massive swarms there. One can only imagine the untold millions of these big dragonflies that moved through the Midwest in advance of the current cold front. It would be fascinating to know with certainty where these animals are headed. Possibly the Rio Grande Valley of south Texas? Mexico? Deeper into Central America? My hunch is that they disperse on a broad front across the Gulf States and then south into Mexico and perhaps beyond. Hopefully, someday this migratory dragonfly mystery will be thoroughly unraveled.

In November 2004 on a birding trip to South Florida and the Everglades, we walked the Snake Bight Trail at Flamingo out to Florida Bay. Among the many great birds and billions of mosquitoes; there were many thousands of Green Darners swarming past the mangroves along the shore for the entire three hours we spent on the deck looking out over the bay. Most seemed to be headed east/southeastward. That would take them toward Miami and the Keys.

Hundreds on the trails of Dawes wetland,between 7-8pm on Thurssday,smaller numbers on Monday and Tuesday from there.
Rick from Licking co

I missed this event in Loudonville by one day. My brother who lives there - called me as he drove through a couple miles of it giving me blow-by-blow details at every intersection til he finally pulled into his driveway on a hill south of town. His wife was frantically shouting to "Get the camera!"

He got a short video after reaching home. It can be watched by googling " Dragonfly Swarm in Loudonville Ohio."

I saw a swarm of nearly 40dragonflies not two days ago. One of them was very interesting; very large, blue and green body, with green eyes.