Ouch. Fun as the New River Birding & Nature Festival was, I apparently picked up some bug, and went down like a ton of bricks today. Some sort of cold/flu. After a pleasant foray this morning helping Bernie Master lead around docents and trustees of the Columbus Zoo, I stopped home for meds and food, and literally collapsed. May it pass quickly...

Anyway, maybe a bit of blogging therapy will help, and I am hopeful that this subject will atone for the last bit of scatness. 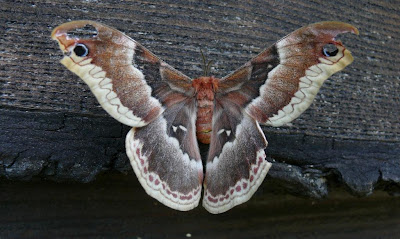 A somewhat weatherbeaten but still beautiful Promethea moth, Callosamia promethea, rests on the side of the main house at Opossum Creek Resort. Prometheas are silkmoths, and nearly all of their tribe are showy eyecatchers. This one is a female; the gals are larger and more ornate in color and pattern. 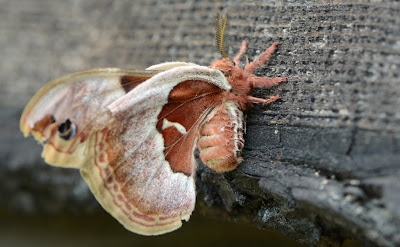 From the looks of that swollen abdomen, I'd say that this moth is gravid - full of eggs. Prometheas and their silkmoth kin are stunning but incredibly short-lived. They lack mouthparts, and thus don't feed. Remnant lipids carried over from the caterpillar sustain the adults, and enable them to survive for perhaps a week.
Their sole purpose is to reproduce; it's the caterpillar that is the most enduring part of the Promethean life cycle. Female moths exude minute traces of an incredibly powerful pheromone, which the male can detect from a mile or more. Using incredibly acute receptors on its large fernlike antennae, the boys navigate unerringly to the girls, possibly covering several miles in an evening in their quest. 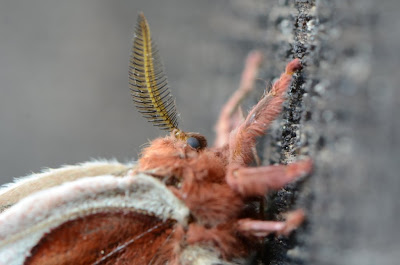 Up close and personal, the beautiful architecture of an impossibly ephemeral forest wraith is revealed. How such an elaborate animal could have evolved to fulfill such a short-lived function is one of myriad mysteries when one delves into Nature.
Like a number of large, splashy moths, the Promethea's name is rooted in Greek mythology. Prometheus was one of the Titans, and he managed to steal fire from Heaven. In an inexcusable breach, he freely gave fire to the common man, and for his transgression Prometheus was severely punished by Zeus. Chained securely to a rock, Prometheus was condemned to be set upon by giant eagles which tore into his body and ate his liver. At night, when the eagles rested, Prometheus's liver would regenerate and by the next day a new liver was ready for the eagles to plunder. And so it went for Prometheus, for a great many years.

Presumably, attaching the name of Prometheus to this moth is an allusion to the fiery coloration of the female.

Wow - I'm jealous! I love moths and have never seen a Promethea. Last fall an Imperial Moth turned up on the wall of one of the buildings where I work, which was pretty stunning.

So that's where the moth on my cabin tore off to...his female!
So beautiful to look at, even if only for a moment..

Cool - Imperial moths are one of the neatest of the giant moths out there! Always a bit of serendipity involved with lucking into any of the big silkmoths...

I wish I had seen your male Promethea, Nina. I've never seen the male, and supposedly they don't come to lights, making detection harder...

Nina stole my comment. How interesting, though, that you mention that the males don't come to lights. Why would some moths do that and others not? And how neat to be right there when you were verbally composing this post! Hope you're feeling better.