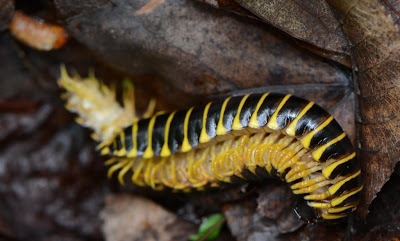 While down in West Virginia, I had the good fortune to stumble into these Sigmoria millipedes, caught in flagrante delicto. We are always assured of seeing a few of these large, colorful millipedes during the New River Birding & Nature Festival, as they thrive in the rich woodlands where we spend much time.

They are often referred to as almond, or cherry, millipedes. The reason? Pick one up and give it a shake inside your balled up fist. The millipede will exude a very pleasant aroma, quite reminiscent of one of the aforementioned fruits. People always react favorably to this fragrance. It apparently is the result of the animal releasing benzaldehyde when under duress, possibly as a form of predator deterrence. 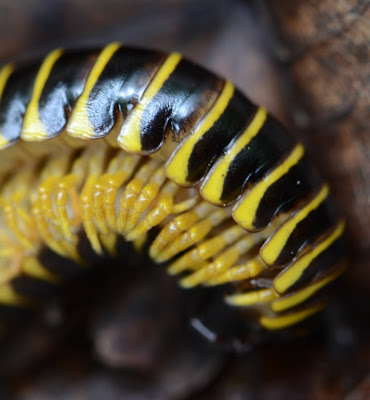 Sigmoria millipedes are rather tanklike in that they are heavily armored with thick scutes, or plates. When bothered, the millipede typically curls into a fetal ball, thus presenting a formidable wall to predators and protecting its more vulnerable undercarriage. 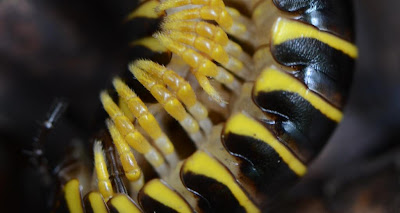 Millipedes and centipedes are often confused, but the two groups are quite different. Both are in the massive phylum Arthropoda, which by some accounts make up 80% of ALL animals on earth
As can be seen in this macro photo, a millipede has two pairs of legs per body segment, and like most millipedes the body is long and cylindrical. Millipedes move in a slow, graceful gliding motion, and are easily captured. They're herbivores, feeding primarily on decaying plant matter.

Centipedes have one pair of legs per body segment, and in general possess far fewer legs than do centipedes. For the most part, they appear leggier and move far faster than than their sluggish millipede brethren. They tend to look much more "creepy" than do millipedes. Also, centipedes are predatory carnivores, armed with venom-producing glands to help disable victims. Some species can deliver a painful bite
But no worries with mild-mannered plant-eating millipedes. In fact, at least the Sigmorias smell delicious.
at May 11, 2011

These guys are quite striking when you find them. Photographs don't do there coloration justice in person the are quite pretty. I found and photographed one of these on Flora-Quest last year. I find the smell more like the smell of freshly cut wild cherry wood.

I didn't know that there is such thing as cherry millipede! Nice pics..

We found several of these little guys in babcock state forest at the cabin we stayed at. I had never seen them before. They are very colorful but my husband thought they were a little creepy. Beautiful picture!

They smell great and taste good too, when sautéed with a little butter, shallot and garlic. Crunchy but yummy!

of these the other day while hiking and is the first I ever saw one. Very beautiful colors. I spent few seconds filming them. https://www.youtube.com/watch?v=pKtUvcgNMfA

I see these all the time in my gardens. I am glad to know that they don't damage my plants. I always leave them alone. Thanks for all the great information.