While leading expeditions in Presque Isle County, Michigan recently, we encountered quite a few species of mammals. Not the least of which was the North American porcupine, Erethizon dorsatum. Everyone knows what a porcupine is, but not too many will get as up close and personal with the prickly beasts as we're about to. 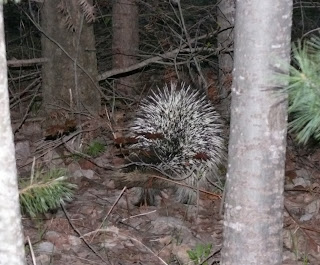 While heading back to NettieBay Lodge in the van one evening, shortly after dusk, we spied a porcupine shuffling across the road. STOP! I shouted, and leapt from the vehicle for a better look. Porkies aren't going to win any ribbons in the 40 yard dash, and we quickly moved in on the lumbering rodent. While porcupines are quite low key and not intimidated by much, we were a little over the top for this one, and it headed for the nearest balsam fir. 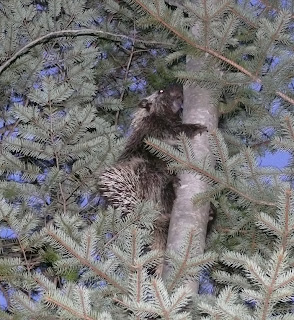 The bristly charmer clambered slowly up the fir, offering us great looks. It was a good-sized porky, perhaps tipping the scales at 20 pounds or more. Its whitened quills are obvious, and it is these dangerous modified hairs that give the animal its fearsome reputation. Many a dog has learned about porcupine quills the hard way. In fact, just before our arrival, NettieBay's resident King Charles Spaniel, Rudy, took a quill through his lip.

Rudy was smart enough to quickly back off and minimize his damage. Some of the fiercer hunting dogs don't, and really get a faceful of spines. Porcupine quills are nothing to trifle with. The thick, hollow spines are retrorsely barbed, or beset with hooks that point backwards. This means the quills will slide into flesh with ease, but you'll have a painful time trying to pull them back out. A big porcupine might have 30,000 quills, so they've got a lot of armament to defend themselves with.

Porcupines are mild-mannered and have to be pushed hard before they deploy their quills. If an animal is dumb enough to invade one's space, the porky will try and lash it with its tail, and a strike will release a barrage of the easily detached spines. Amazingly, there are at least two species of predators that are adept at flipping and gutting porcupines, the fisher and wolverine. 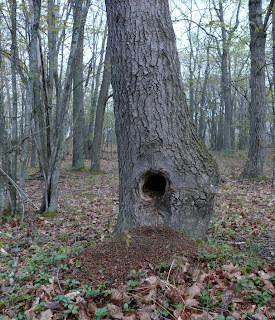 NettieBay's owner, Mark Schuler, knew of two porcupine dens and took us to have a look. They'll use the same den site for long periods of time, and Mark thought that the animals had been using this red oak for at least a decade. You certainly can't miss them. Not only is the hole large and conspicuous, the porkies leave other evidence. 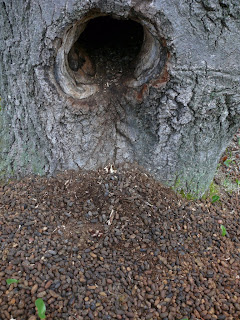 Up close and on the porcupine's door step. Yes, that enormous pile is porcupine scat, a flume of excreted pellets cascading from the residence. A real state agent would be horrified, as the giant dung pile greatly reduces the homestead's curb appeal. But apparently the porcupines give not a whit for external appearances, nor do they seem to care much about secrecy or camouflage. 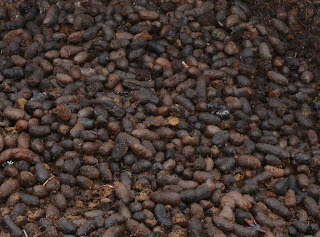 I imagine porcupine pellets are high in fiber, given their penchant for browsing on tree bark and woody plants. This dung heap must have been a foot deep and a few feet wide; a veritable pyramid of scat accumulated over the years. 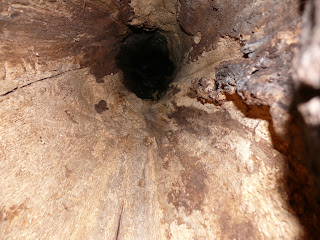 Well, one obvious question leaps right to mind when looking into the gaping maw of a porcupine den. "Is Mr. Porcupine inside"? We all wanted to know, but I wasn't about to stick my head in there to find out. For one, porcupines are well known for clumsiness and routinely fall from their perches. I'd hate to be looking up into the shadowy bowels of this tree and have the thing come crashing down on my face. Although that would make for a good story, and maybe I'd even be able to laugh about it years later.

The other problem with looking inside the den is that jumbo pile of scat. You'd essentially have to be laying in it on your back, and while I'll go to great lengths for you, the reader, I won't go that far. So, I turned my camera's flash on, and stuck the trusty old Panasonic right into the tree, pointed upward, and pulled the trigger. The result, as seen above, is a like a virtual colonoscopy of the den tree. As you can see, the hollowed out trunk extends up for some distance, but in reviewing the photos on my camera's view finder in the field, we could see no evidence of the porcupine. 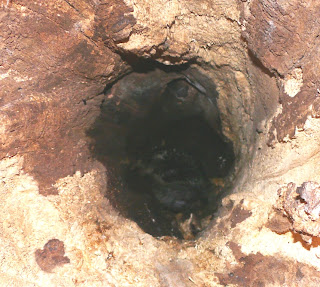 But wait! After downloading the photos and manipulating the brightness and contrast, it turns out that the porcupine was indeed in the house! In the somewhat creepy photo above, you can see the animal looking down the tree at my camera and hand. That's his nose on the right, and what looks like a foreleg just below the nose. Click on the photo to enlarge it and you'll better make out the details. 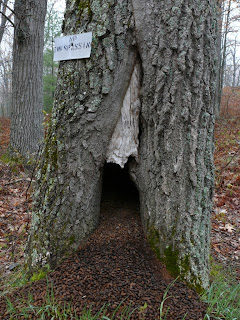 ﻿This was the other porcupine den tree that we saw. The resident of this tree, quite wisely, had posted a No Trespassing sign. I imagine his neighbor will be tacking one up soon.

Email ThisBlogThis!Share to TwitterShare to FacebookShare to Pinterest
Labels: porcupine

Wonderful.
It's these once-in-a-lifetime experiences that make life rich.
How many people can say they've taken a look inside a porcupine den?

Love your descriptions, from "bristly charmer" to "virtual colonoscopy of the den tree"

Lucky you, to have such a good look and close encounter.

Thank you, N & W, and am just fortunate that the porky did not fall from the tree and onto my camera hand. I hear th extrication of their quills is rather painful.

Where in the Cuyahoga Valley National Park can one find porcupines?? A scientist showed me removed bark on trees along the Redlock Trail, which he claims was the work of a porcupine. A ranger informed me that he saw a porcupine along the Yellow River a number of years ago. Have there been any recent sightings of porcupines in the park, and where??