A fine showing of orioles

I love John Pogacnik's bird reports from his "yard". Those of you who follow the Ohio Birds Listserv will certainly know of the man via his regular reporting. And those of you who have been longtime active birders in these parts probably know the man himself.

Anyway, John lives in a house that offers sweeping vistas of Lake Erie, east of Cleveland. He's done much to enhance his terrestrial patch, too, by installing numerous feeders, boxes, likeable plant material, etc. All of this diversity of habitat, much of it visible from his sunroom, has allowed John to accumulate what must easily be the wildest - and probably largest - yard list in the state of Ohio. Bet you don't have Black-legged Kittiwake, King Eider, or Purple Sandpiper on your "yard list"!

So, I open one of John's missives last Tuesday to see a yard report that was massive even by Pogacnikian standards. Try this on: 240 Pine Siskins; 200 Baltimore Orioles, including 21 on the feeders simultaneously; up to 11 Orchard Orioles feeding at once; huge Rose-breasted Grosbeaks numbers; and half a dozen Evening Gosbeaks and "Gambel's White-crowned Sparrows. The latter grosbeak has slipped into the category of Ohio megararity and the pretty white-lored sparrow subspecies is very rare here.

Wow! And he gets photos of all of this stuff, too! I asked John for a few pics to share with you, and he was good enough to oblige. 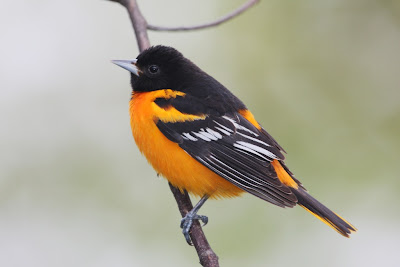 Photo: John Pogacnik
Imagine a few dozen of these Halloween-colored whistlers cavorting around your feeders, at one time! 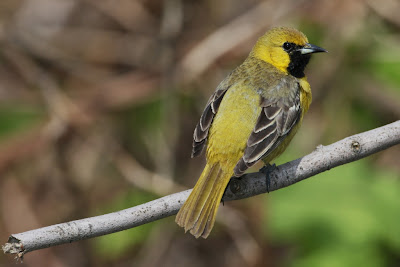 Orchard Oriole, first-year male, sometimes called "bearded males" It takes them two years to gain their reddish-brick coloration, but these youngsters sing just fine. Always make a point to run singing Orchard Orioles down to see if it's an apprentice or Master. 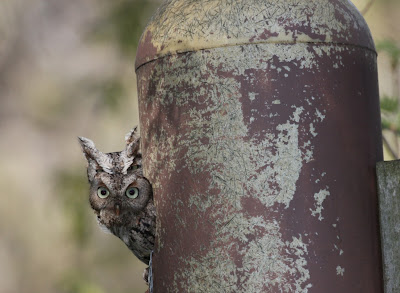 At one point, John heard a hubbub from some of the small songsters and glanced over to see these Eastern Screech-Owls glaring from their Wood Duck box. I mean, how good can it get!!!

With a yard like this, I'm surprised John ever leaves.

Thanks to John for regularly making photos, reports, and information available to the birding community. He is, without doubt, one of our greatest assets.
at May 13, 2011

The Screech-Owl is just too adorable, playfully sneaking out. Good shot! Made me smile :)