The Booby is dead, long live the Booby! 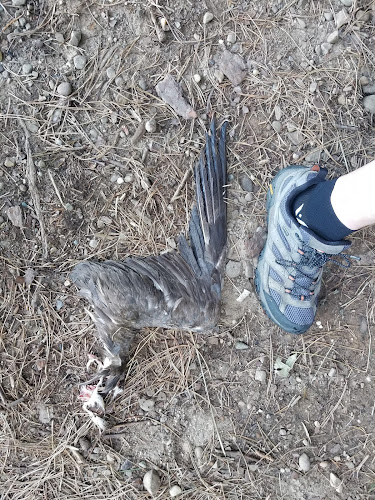 Photo by Jeff Harvey, posted with permission
We - the birders of Ohio - were rocked by some unfortunate news this morning. I received an email around 8:30 am from Bob Lane, along with some photos taken moments before by Jeff Harvey. Jeff had gone to see the Brown Booby once more - the subject of my prior post, RIGHT HERE - and soon found this wing floating under the booby's favorite perch tree.

Alas, there's no mistaking that wing. Some predator had taken out what had become perhaps the most famous vagrant bird in the Midwest. 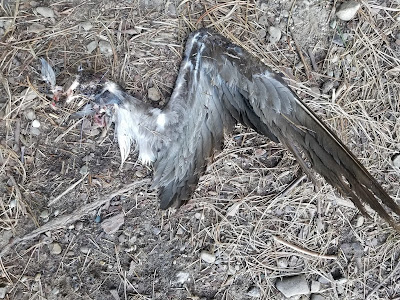 Photo by Jeff Harvey, posted with permission
One of the juvenile Brown Booby's wings, dismembered. Who would have done this dastardly deed?

An obvious suspect, and some fingers have pointed in this direction, would be the juvenile Peregrine Falcon that I discussed in my previous post about this booby. However, I do not think the falcon is guilty. It is true that peregrines are primarily bird hunters. But they generally take much smaller prey than this booby, although the powerful falcons can kill ducks and smaller geese. But a Brown Booby weighs nearly a pound more than a peregrine, is nearly twice the length, and its wingspan is almost a foot and half longer. It'd be a tall order for a falcon to take out a booby and it probably wouldn't be worth the effort, especially in an area where more manageable prey abounds. Plus, I don't think a falcon would neatly sever the wings.

Also, the last report of the booby from yesterday came from around sunset or even a bit after, and the booby was settled into its favorite perch tree. While Peregrine Falcons are known to occasionally hunt at night, such behavior is not typical and the species is normally a diurnal hunter. While the booby kill could have been made around dawn this morning, before Jeff or other birders arrived, it seems likely that something got it last night.

I would guess Great Horned Owl. These powerful owls are at the top of the avian food chain in these parts, and are known for dismembering body parts of larger victims. Especially the head. I don't know if anyone has found or will find the rest of the booby carcass, but if it turns up it'll be interesting to see if it's headless or at least partly so. Great Horned Owls are known to take birds up to the size of mergansers, Short-eared Owl, and even - at least once - an Osprey. A booby roosting more or less in the open in a dead tree would seem to be a sitting duck for a hungry owl.

Scores of people came to see the celebrity booby during its ten days at Nimisila Reservoir. There's no telling if the wayward youngster would have made its way back to southern oceans, eventually. But that's a moot point now. Fortunately, in the bigger picture, Brown Booby is probably the most numerous of the world's half-dozen booby species, with a population likely numbering several hundred thousand. So, while many of us will lament the loss of the Ohio bird, the species will carry on.