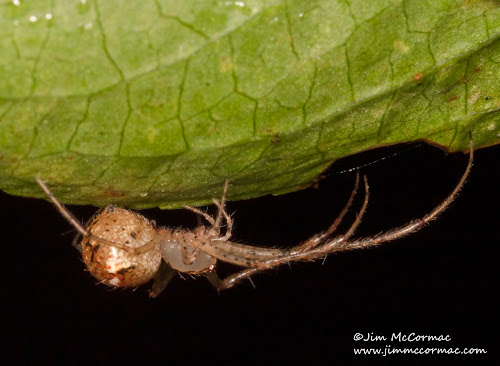 A pirate spider lurks under a leaf/Jim McCormac

Columbus Dispatch
September 6, 2020
NATURE
Jim McCormac
Like it or not, we’re entering prime spider season. And there’s a good chance YOU don’t like it. Arachnophobia is one of the most common fears. That’s a shame. Spiders are fascinating in behavior and appearance, and critical components of ecological webs.

There are approximately 650 spider species known from Ohio, and they come in many shapes and sizes. Many species overwinter in the egg stage, and the tiny spiderlings hatch in spring. By autumn, they have grown to an appreciable size and we notice many of the larger spiders.

Spiders represent an enormous group of apex predators, and are a vital part of maintaining ecological balance. As one of the most abundant group of hunters in most of our habitats, they collectively harvest an enormous volume of prey.

Silken webs of all sorts are the most conspicuous evidence of spiders plying their trade. Some webs are small and inconspicuous; others are large and showy. The raison d’ etre for these webs is universal: snare unsuspecting prey.

I was recently part of a group that converged at the ridgetop home of artist and author Julie Zickefoose in rural Washington County. Our party included Kelly Ball, Laura Hughes, Jessica Vaughan Melfi, Shila Wilson, and Julie and I.

A big part of the foray involved a nocturnal outing. We were mostly stalking moths and caterpillars, but found numerous interesting spiders. Like eight-legged vampires, many spiders emerge under the cloak of darkness.

As the night wore on, members of our party gradually slipped away, sanely returning to base camp and soft beds. Eventually it was just Laura and I and our flashlights exploring the inky woodlands. We finally ran out of steam at 3 am, but as is often the case, the post-midnight hours were productive.

At one point Laura summoned me to look at a spider lurking under a leaf. She had found a pirate spider, Mimetus puritanus!

There were good reasons to exalt over this find. One, pirate spiders don’t seem to be very common, or at least I have seldom seen them. Two, pirate spiders are arachnoid Rambos.

Almost all of our spider species are venomous, and other small animals mostly do well to avoid them. A pounce and a quick bite and they’re paralyzed toast. Even spiders must watch their steps when around other spider species.

The pirate spider isn’t intimidated by its venomous kin. Indeed, this small group – there are 8 species in Ohio and 156 species worldwide – specialize on hunting other spiders.

Unlike many other spiders, pirate spiders do not construct webs. Some species lie in wait, and when another spider happens by they pounce on it, kill it and eat it.

More interesting from a tactical perspective are the web-raiding pirate spiders. A hunting spider will sidle up to a web and gently twang a strand like a homicidal banjo player. This creates vibration throughout the web, and the rightful occupant will rush from its hiding spot and into the web to investigate.

The pirate spider then blitzkriegs the unsuspecting victim, and kills it.

Such dramas play out in abundance under cover of darkness. Horrifying as they may seem when gauged by human sensibilities, this is just the reality of Nature. And Nature is usually not very Disneyesque.

Naturalist Jim McCormac writes a column for The Dispatch on the first, third and fifth Sundays of the month. He also writes about nature at www.jimmccormac.blogspot.com.
at September 07, 2020