A Lesser Maple Spanworm, Macaria pustularia, as seen from below. Moths sometimes alight on my front door windows, allowing for shots like this. I have a hard enough time identifying many moths from above, let alone an angle like this, so after making some shots I go around to the outside of the front door to see what I just shot.

When I did so, I was interested to see a very cool many-legged arthropod on the hunt, and paused to watch it and make some photos... 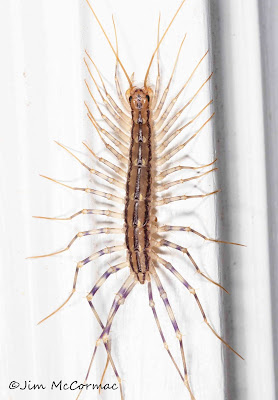 A House Centipede, Scutigera coleoptrata, taking a momentary rest on the white paintwork around my front door. It had entered the sphere of the night lights to hunt the various tiny insects that come in after dark. When seen well and with good light - as my trusty Canon twin-lite flashes provided - the colors on this centipede are quite showy. The animal has a subtle golden-orange cast to the body, but check those legs out! They are marked with gorgeous violet bands that become more prominent rearward (the animal's head is at the top).

House Centipedes are not native here in North America, or many other places in the world. It's indigenous to the Mediterranean region, but has been accidentally spread across much of the globe. These centipedes are adept at slipping into the tiniest of cracks, and thus can easily be carried as incidentals in all manner of products being shipped far and wide. They've been present in the eastern U.S. since at least the late 1800's, and are probably in your house. 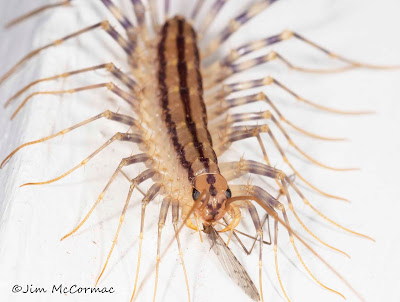 Watching the animal hunt was interesting. It didn't race about at breakneck speed - and these leggy critters can be very speedy if they so choose - but moved at a leisurely pace, feeling about with its greatly elongate antennae. It finally encountered a tiny caddisfly and instantly seized it in its maxillipedes - those pincher-like claws extending forward from the sides of the head. Venom glands are imbedded at the base of the maxillipedes, and when a centipede bites prey, it quickly injects venom to disable victims. It then commences to gobble up the prey, as this one is doing.

House Centipedes are not large enough to inflict a bite on a person, as far as I know. But some very large species certainly can, especially some of the tropical species. There are a few fairly large centipede species that occur in southern Ohio and points south that I would not handle carelessly, as they look large enough to penetrate skin and inflict an unpleasant bite.

But, spooky/creepy as House Centipedes are to many people, you've got nothing to fear.