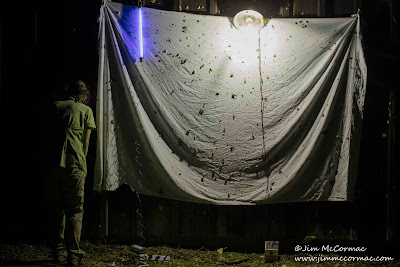 An extremely productive moth sheet hangs from the side of a barn in Highland County, Ohio. The purplish light to the left is a UV (blacklight), and the big one towards the center of the sheet is a Mercury Vapor light. An excellent combo for maximizing moth attraction. John Howard, Kim Banks, and I were out running sheets into the wee hours on the night of July 17-18 (packed up around 3:30 am!), and experienced some of the best mothing in recent memory. Thanks to Nancy Stranahan, director of the Arc of Appalachia, for allowing us to survey an interesting swath of their property.

I am going to make this a two-part series, as I have so many cool moths to share. And if this blog seems heavy on insects of late, it probably is. Three big projects - two books, and a photography project - have cut my field time WAY down. Mostly it's been nocturnal mothing forays. 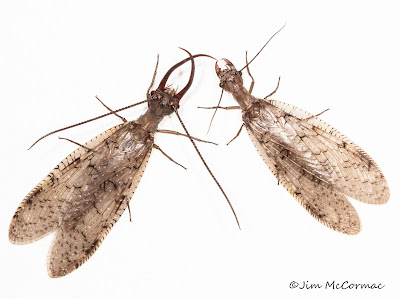 Non-moths often visit illuminated sheets, especially if water features are nearby. In this case, Rocky Fork with its exceptionally clean water is not far off. Because of this, a stunning number of huge Dobsonflies, Corydalus cornutus, came to the sheets. The larvae are called Hellgrammites, and are strictly aquatic. After multiple years in the water, the larvae transform to these amazing winged adults, which can approach a half-foot in length. The long-mandibled male (L) lives about three days; the female about 12 days. We lured probably 20 Dobsonflies. 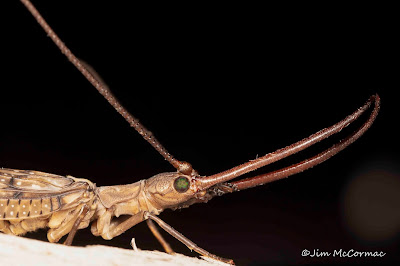 As everyone who sees a male Dobsonfly wants to know, no - they cannot pinch. Formidable as those mandibles appear, the insect cannot generate any force with them. I know, having stuck my finger in there to affirm this for myself. It apparently uses the mandibles to joust with other males, sort of like an entomological elk. 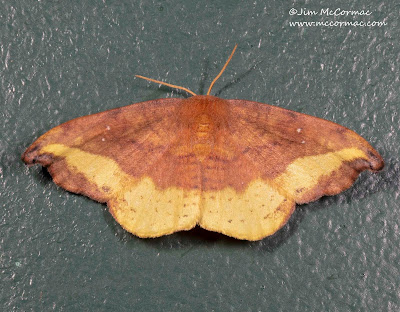 A gorgeous Rose Hooktip, Oreta rosea. I personally do not see many of these showy moths. They are said to feed on birch as caterpillars, but I have only seen the cats on viburnum, specifically Arrowwood, Viburnum dentatum. The caterpillar is interesting in that it hides in plain sight atop a leaf during the day, looking much like a bit of plant debris. 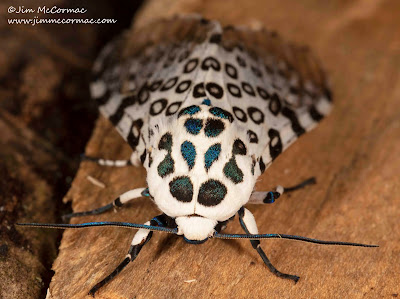 The Giant Leopard Moth, Hypercompe scribonia, always a crowd-pleaser. We probably saw 15-20, maybe more. This species is very much the generalist, its caterpillars consuming a wide array of often weedy plants. 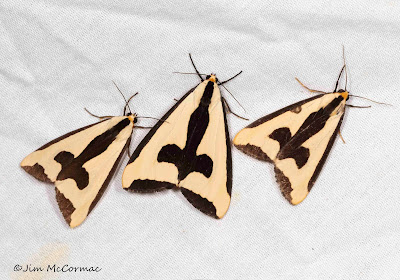 A trio of Clymene Moths, Haploa clymene. +This is another moth that always attracts attention and elicits comments. People often notice them, as they are prone to resting in exposed areas atop leaves during the day. 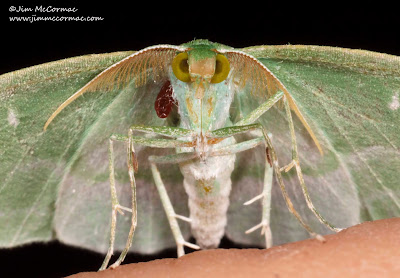 The Badwing (that's really its name), Dyspteris abortivaria, stares menacingly at the camera. The tiny moth could fit comfortably on a quarter. Note the reddish mite affixed to its abdomen under a wing. Mites are not uncommon on moths. Indeed, there is a specialized group of mites that only inhabits moths' ear canals (the mite in this photo is not one of these). But only one of the two ear canals. To congest both canals would affect the moth's ability to detect the echolocation of incoming bats (big moth predators). In fact, there is a book devoted to this arcane subject: Mites of Moths and Butterflies (Asher Treat, 1975). 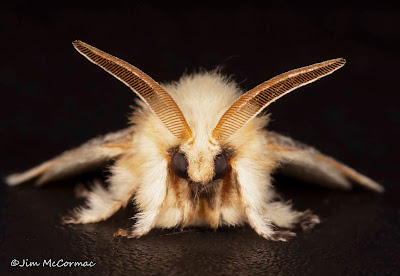 A personal favorite, the Black-waved Flannel Moth, Megalopyge crispata. The moths are extremely photogenic. It is a very common species, and the caterpillars eat a wide array of plants. The cats also pack a punishing sting due to their venomous spines.

Some moth species are quite easy to work with, from a photographic perspective. In general, the fuzzier they are, the easier they can be handled and moved around. Also, in general the larger the moth, the more easy it is to manipulate. So, we can move such species to substrates more favorable than the stark white, brightly illuminated sheet that attracted them in the first place. 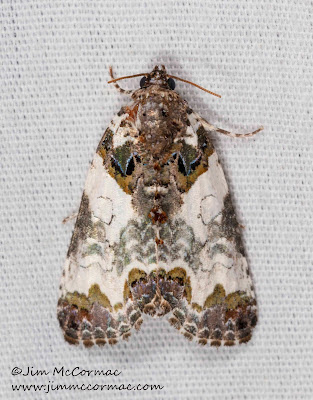 A showy species with a less than showy name: Tufted Bird Dropping Mimic Moth, Cerma cerintha. There are many species of moths (and other organisms) that ape the appearance of bird droppings. This allows them to hide in plain sight during the day. Apparently very few things want to eat bird droppings. 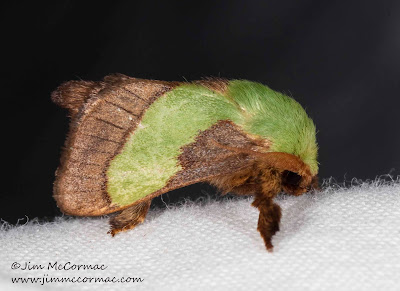 The Smaller Parasa, Parasa chloris, is without doubt one of our coolest moths. It's another personal fav. The brown and lime color scheme isn't common, and maybe that's why it generally holds appeal to all who cast eyes on one. The caterpillar, seen and photographed from the right angle, looks like a Hippopotamus. It's one of the slug moths, which are named for the mode of locomotion of the caterpillars. All of them are showy, and dozens of many slug moth species came to our lights on this night. 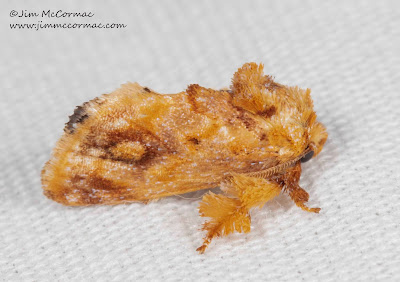 We were quite pleased to have numerous Spun-glass Slug Moths, Isochaetes beutenmuelleri, appear. The tiny moth is rather ornate, and I'm sure it's all but invisible when resting on senescent foliage or leaf litter during the day. The caterpillar is what the name stems from, and it looks like a Swarovski crystal. A photo of one is in THIS POST. 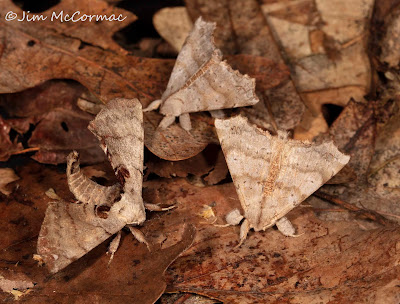 Two consummate dead leaf mimic moths, doing their thing: looking like dead leaves, on dead leaves. Spotted Apatelodes, Apatelodes torrefacta (L) and a pair of Angel Moths, Olceclostera angelica. A great many moth species have evolved coloration and patterning that blends with abundant forest leaf litter. These two species - which are larger moths - would be nearly impossible to spot on the forest floor. Note how the Apatelodes even curls its abdomen upward to create disruptive patterning and rendering itself even more unrecognizable.

The next post will cover another swath of moths from this expedition, including some rarities and huge jaw-droppers.