As this blog's title does have birds in it, and the feathered crowd has been absentee here for some time, I thought it high time to rectify that situation.

Mainly, though, I just wanted to go out and try to photograph (I was going to say "shoot", but I've had people take that the wrong way :-) ) birds. They are still probably my favorite part of the natural world, my entrée into biology, and are almost always challenging and rewarding subjects to photograph.

So, this morning at the crack of dawn, I headed to a nearby metro park, Glacier Ridge, and spent a few hours birding/photographing. This time of year, at least on a clear sunny day like today, it's best to be out REALLY early. By 9 am or so, the light is already getting rather harsh and constrasty. 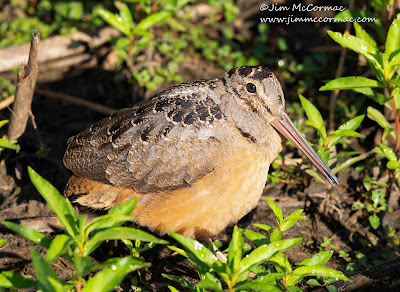 An American Woodcock, Scolopax minor, poses in a bed of Water-purslane, Ludwigia palustris, in a boggy opening on the edge of a marsh. There were three, a family unit no doubt. And a woodcock that's just sitting and preening - and at close range to boot - is decidedly not a difficult subject to shoot.

This trio is quite tame and utterly unintimidated by the myriad walkers that pass by nearly overhead on an elevated wooden boardwalk. A Virginia Rail was nearby, also at rest, but it was directly in line with the bright sun. I just admired it, rather than take photos that I'd just later delete.

For me, watching birds is as much fun as shooting them. This is undoubtedly due to my history as a hardcore birder LONG before getting serious about trying to capture bird images. I've been watching and learning about birds since I was probably 6-7 years old and for the majority of my life I just watched (and listened). Trying to make serious bird images has increased my knowledge of these subjects tremendously though - especially in regards to behavior. While I've always been more of a watcher than a listing ticker, sitting in one spot sometimes for hours, awaiting a good situation to unfold, forces the observer/photographer to notice in great detail the bird's actions and behavior, as well as that of many other incidental animals. 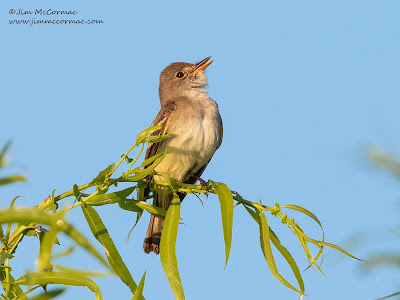 A Willow Flycatcher, Empidonax traillii, sneezes out its snappy little song while living up to its name. The bird sings from atop a willow, Salix ssp. Until 1973, it was called Traill's Flycatcher, but long before that people had noticed two important things about "Traill's" Flycatcher. There was a distinct partitioning of habitat within the "species", with one group favoring willow-dominated wetlands and low-lying ground, and the other more northerly group inhabiting very wet alder-dominated wetlands. And their songs and calls differed distinctly. Roger Tory Peterson was among those that discerned these differences early on.

In 1973, "Traill's" Flycatcher was split into two species: this one, and the Alder Flycatcher, E. alnorum. While Thomas Traill - a friend of John James Audubon and for whom Audubon named the bird - lost his honorific, the bird was correctly cleaved into two. I've become quite familiar with these species, as I see/hear scores of Willow Flycatchers throughout the Midwest every year. My regular late spring trips to northern Michigan, where Alder Flycatcher rules, have given me a good understanding of that species. In addition to habitat preferences, the songs are quite different. The Willow delivers a sneezy Fitz-BEW! as its primary song. The Alder gives a distinctive Free-beer! with a descending pattern. Once one is familiar with these songs, it's easy to tell them apart. Alder Flycatcher actually reminds me more of a small Olive-sided Flycatcher, and even gives pip-pip call notes similar to that larger species. It also often has richer olive tones reminiscent of the Olive-sided.

PHOTOGRAPHIC NOTE: On this excursion, I took my Canon 400 f/2.8 II (and 5DIV body) as I expected to mostly be working in pretty close range to my subjects. In my backpack were the Canon 1.4x III and 2x III teleconverters. So, in short order I could shoot with a 400mm, 560mm, or 800mm. The Willow Flycatcher was fairly far and atop a 20-foot willow, favoring a singing perch that he constantly returned to. The image above was made using the 2x teleconverter. This lens is one of few that I can consistently get good results with the 2x. It hardly seems to slow focus acquisition, locks on target instantly, and produces a very sharp image. 2x teleconverters cause the loss of two stops, but since the lens is an f/2.8, adding the converter only drops it to an f/5.6 lens. I generally want to shoot birds stopped down to at least f/5.6 anyway, and at smaller apertures if light permits. While adding a 2x teleconverter may seem like a relatively inexpensive way to double the magnification of your lens, I would try one out before buying. I've had unsatisfying results with most lens. This 400mm is the only one I've used where the 2x really shines and I have no qualms about using it with this lens. I also have Canon's neat little 300mm f/4 lens, and the 2x works pretty well on that, but the lens becomes an f/8 minimum aperture, and the teleconverter definitely slows focus on what is already a fairly slow to focus lens. For wildlife photographers able and willing to shell out a chunk of money, I'd highly recommend the 400mm f/2.8 II (I understand the new version III is even better). Because it pairs so well with Canon teleconverters, the lens offers tremendous diversity.