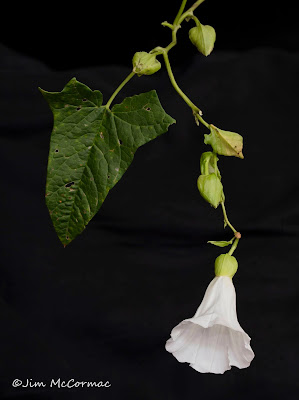 Often derided as a "weed", the gorgeous Hedge-bindweed, Calystegia sepium, is a showy member of the Morning-glory family (Convolvulaceae). It grows in local profusion on my backyard fence. I finally took some time this morning to make some images of this plant. In addition to its aesthetics, I like the fact that it plays host to two species of tortoise beetles. Hopefully I can run one or both down and make some images. They are exceptional insects.

This is a complex "species" that ranges widely in North America and Eurasia. A number of subspecies have been described, and one American species has been split from it: C. silvatica. Apparently Eurasian plants are now in the New World, adding to the issue. Not everyone accepts all of this taxonomic carving, and for now I will remain a lumper.

Read on if you're interested in wonky photography notes... 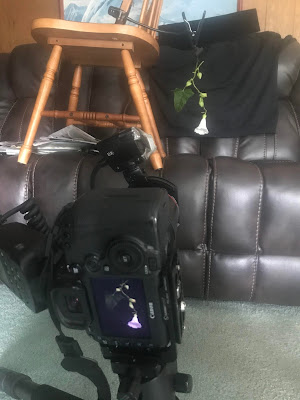 Sorry for this crude iPhone shot, and I see I apparently must wipe off its camera lens. But it shows the impromptu studio I set up to make the prior shot. As the bindweed will and does locally spread to the point of requiring limited control measures, I had no compunction about collecting a piece and bringing it into the living room. I would not recommend this method for uncommon or rarer natives, and the same system can easily be set up outside and in situ. Shooting plants where they grow, without disturbance, is always best. Breezes do make it a challenge, though. If wind is non-existent, one can use similar set-ups on outdoor plants using multi-second shutter speeds.

Anyway, I hung the vine from a flexible clamp attached to a chair, and put black draping behind the subject. The camera (Canon 5DSR) is tripod-mounted and rigged with Canon's 100mm f/2.8L macro lens, and twin-lite flashes. The camera's settings were ISO 200 and f/16. Given the dim light, the shutter speed was 2.5 seconds. I shot in Live View, so that the mirror was locked up and doesn't move and used the 2-second timer delay which eliminates the possibility of slight movement while physically actuating the shutter button. I had the flashes on, and set to back curtain flash so they fired at the end of the exposure. Flash power was muted by three stops to provide very mild fill light. Even at low levels, flash can imbue the image with slight yellow tones, but that's easily corrected in post-processing. I made an identical image without flash (making necessary exposure adjustments), and preferred this one as it created better illumination on the flower.