Who foots the bill for conservation? 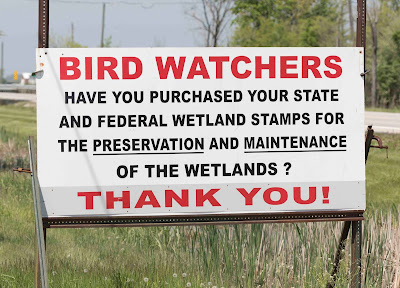 Many of us have seen this sign, which a landowner across from Ottawa National Wildlife Refuge (northwest Ohio) puts up every spring when thousands of birders descend on the region. I'm with the sign-poster - buy those stamps! - but the clear implication is that birders need to do more conservation work (note it doesn't single out any other group, only birders). Anyone with a foot in conservation and natural history has heard, probably scores of times, that it is hunters who pay the bill for conservation. I've seen that in print articles several times recently. And adamantly disagree with the contention that the hunting and fishing communities support the bulk of conservation work,

I don't dispute that hunters/anglers have played an invaluable role in conservation, and still do. But to imply or state outright that they are the primary group doing conservation's heavy lifting is wildly inaccurate. To do so dismisses The Nature Conservancy, an organization that has protected tens of millions of acres in North America and abroad. Scores of local metro parks own and manage many thousands of acres, and many of these agencies are supported by public levies. As hunters constitute only 4-5% of the public, presumably it is the nonhunting conservation community that overwhelmingly supports metro parks, their levies, and all of their conservation work. Along that line, Ohio voters overwhelmingly approved passage of the Clean Ohio Fund in 2000 (again, following the demographics, passed by roughly 95% nonhunters). This 400 million dollar program has resulted in the conservation of tens of thousands of acres. Our federal agencies such as the USFWS and other facets of the Dept. of Interior are funded mostly by the general public's tax dollars, as is the EPA, both federally and on the state level. Legions of nonprofit land trusts, museums, arboretums and other land-owning/managing organizations funded primarily if not nearly exclusively by the nonhunting community do wonderfully effective conservation work, collectively on a major scale. At least one study makes a case that the non-hunting public foots the vast majority (94%) of the bill for conservation, when all things are considered: https://www.wyofile.com/wp-conte…/uploads/2014/…/SMITH-1.pdf

Yes, hunters/anglers' license fees (which they purchase for the right to physically harvest wildlife, which is held in the public trust) do provide much of the funding to state wildlife agencies. But there is FAR more to North American conservation than just those programs.

My position is not anti-hunter, or pro-birder, or any other biased slant - just an interest in the truth about conservation and its funding. And an interest in seeing all parties, no matter their persuasion, do a better job of uniting to help protect more land. And to see all parties who foot the bill for conservation have a voice at the table. Right now, especially in regards to the latter sentence, that's not the case.

A great posting. I've thought about this alot as well. Its too bad that any particular group needs to pay for conservation. Conservation should just be a given. That fact that its not is really the troubling point. -DM

Good post. Here in Pennsylvania hunters primarily, but not exclusively, fund programs focused on mammals and birds. BUT, a very vocal group of hunters wants no part of having the general public fund those programs -- if the public did the Game Commission would have to respond to birders, photographers and non-hunters and even the Commission seems reluctant to having to respond to the public.

Thanks Dwayne, and I agree. Unfortunately conservation isn't a given, though, so all of us - all groups - with a stake in it need to work together.

We've got the same mentality here in Ohio, Woody, and I suspect to some degree so do most other states.

The "study" you cited was not peer reviewed, scientifically proven or published. It was funded by several anti-hunting groups. But its biggest shortcoming, by far, comes from the methodology section which states:
"State funding was not considered in this study, in part because most state wildlife agency funding flows from the federal government (about 70% in Nevada’s case), and in part because it would be a task larger than our resources allowed. It is also generally true that the state funding (e.g. hunter license and tag sales) is rarely adequate to cover the direct costs of administering the related programs; therefore, state-level funding can reasonably be classified as hunting or sportsmen services rather than wildlife management."
State wildlife agencies are indeed mostly funded by hunters (check your state) and it's the agencies that are tasked with managing wildlife.

The point of my post is twofold: That there is demonstrably major sources of conservation funding and accomplishments outside of fish & game agencies, and two, that we should be looking for common ground, and ways to better work together (see my last paragraph).

While "it's the agencies that are tasked with managing wildlife" as you say, a strong case could be made that many other organizations have surpassed them in management sophistication, at least insofar as overall biodiversity management goes. And have the successes to point to. True conservation is, as Aldo Leopold said, “To keep every cog and wheel is the first precaution of intelligent tinkering”.

Correct me if I'm wrong, but birders are not paying an 11% tax on every item they buy for birding? Hunters and fisherman pay the tax on every hook, bullet, arrow, bow, gun, fishing rod, etc. that they buy. Much of the funding from the Federal Government is a redistribution of these funds to the state agencies. When state and county parks receive funds, and some grants awarded to the groups like the Nature Conservancy they are still public money that would include taxes paid by hunters, fisherman, as well as the non sportsman. Don't get me wrong, I support conservation. I was in the business for 30 years. But I support conservation as the wise use of a resource, and am less inclined to support conservation that is really preservation except in extreme cases. Preservation is basically no use of a resource.

“Anonymous “. Too many errors/inaccuracies in your short comment to even address. Hunters aren’t the only people that buy guns and ammo. And as they constitute only 5% of taxpayers, their contributions there are small. Your last sentence speaks to perhaps the primary reason our natural resources are in such trouble. This incredible human-centric greed and arrogance, where if we can’t use/exploit it, that resource is of absolutely no value. Such small-minded, short term, small picture thinking...