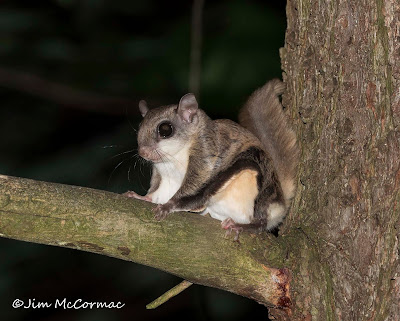 A southern flying squirrel, in a rare moment of repose.

I had a rare treat last night, when a friend, Roman Mast, invited me to see an incredible display of southern flying squirrels at his property in north-central Ohio. Roman is into birds, and puts out feeders for the feathered crowd. It didn't take him long, some years back, to realize that come nightfall an army of flying squirrels would descend upon his feeders. 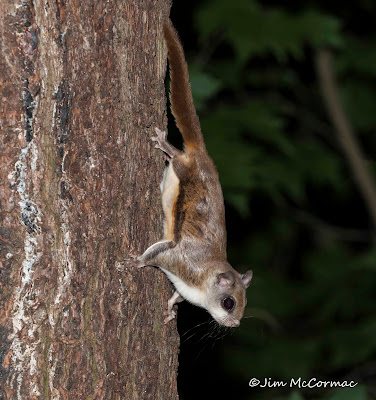 He made some clever tweaks to the feeding operation to facilitate the squirrels (and the squirrel-watchers!), and they've responded to his largesse. While at least a few squirrels visit year round, for a few magical weeks in June/early July, the numbers are over the top. Last night, we estimated 50-70 of the furry gliders were around the feeders. But there's really no way to estimate them very accurately. Flying squirrels are such frenetic balls of energy, racing pell-mell through the trees, and routinely leaping into space to glide to a distant tree, that's it's impossible to keep any sort of tab on them. A possible explanation for this seasonal boom in numbers may be juveniles fresh from the nests. April is apparently a big month for birthing flying squirrels, and they remain under their mothers' care for about six weeks. It's possible that the parents bring the newly active juveniles to Roman's feeders for some easy pickings. As the youngsters become more adept at harvesting wild foods, and are forced to strike out on their own, the numbers of squirrels at the feeders drops.

At times, ten or more animals would be on one tree trunk in the vicinity of the feeders, and a glance into the towering white pines would reveal many others darting about. A hallmark of a flying squirrel is its astonishing ability to glide. A loose flap of skin - the patagium - stretches between fore and hind legs, and when the squirrel launches into space, it flares it legs and becomes a furry wingsuit. Glides in excess of 300 feet are possible, and the squirrel can adeptly jig and jag to avoid limbs and trees. When it's ready to alight, it flips its flat wide tail up vertically, which acts as an airbrake and serves to force its body down and head up. This positions the animal for a graceful landing, and oftentimes upon alighting, it'll race around to the other side of the tree. This may be a behavior designed to thwart owls that might be on their heels. 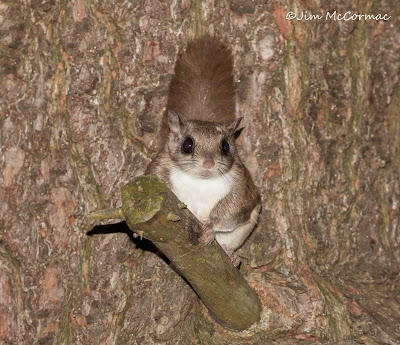 Flying squirrels are said to be the most common squirrel in wooded regions of eastern North America, including Ohio, and I'd have no reason not to believe it. This animal is so thoroughly nocturnal that few people see them. I do lots of nighttime field work and have done so for years, and I hear their high-pitched twitters and the scrabble of sharp claws on bark all of the time at night. The concentration of squirrels at Roman's place offers a window into their abundance. I don't think, nor does he, that there is anything exceptionally unusual about the overall habitat around his property. A mixture of various ages of deciduous forest interspersed with openings as is common in much of the state, excepting the regions of intense agricultural.

Very interesting. Thanks for posting.

Where in North Central Ohio? I've read that Southern Flying Squirrels are the most common squirrel in Ohio! Photographing squirrels is my hobby and I'm planning my birthday weekend which happens to be late June/early July!

I haven't attempted to look for the flying squirrels due to logistics. Obviously, I'm not going to leave my hotel room in my rental car in the middle of the night to drive to the nearby forest or state park, lol

But with so many Airbnbs now, I'm thinking this would be a great (and safer) way to see them from the comfort of a backyard deck!

Does your friend have an Airbnb?? If I could just get a few towns or cities where there is a known presence, I could go go from there! Thanks!