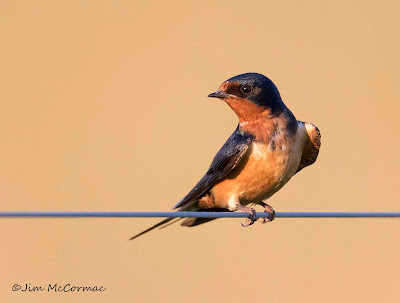 I'm fortunate to have an accessible and pretty wildlife-friendly farm in close range. I'm free to enter, and practice photography. This is especially nice when time is tight, or I see that the late day light is going to be stunning, as it was tonight.

I only had about a half-hour tonight, but the golden light was pristine and a couple of barn swallows provided irresistible targets, so I spent my time with them. A gorgeous adult is above. Barn swallows nest in good numbers in the barns and outbuildings of this farm, and the manager is bird-friendly. Lots of swallows are produced here. Recently I made a post, HERE, about trying to capture these birds on the wing. That's MUCH harder to do than shooting the swallows at rest on a fence. 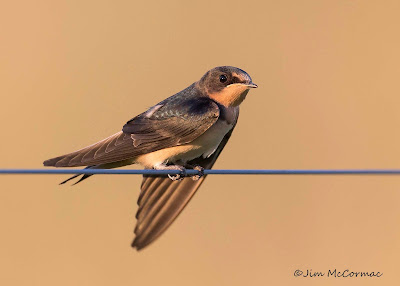 A recently fledged juvenile barn swallow flexes a wing. The youngster has a steep learning curve, learning to use its innate and superb aerobatic skills to glean insects from the air. While I imagine some of those skills are built-in, it seems to me like they keenly watch their parents and the other swallows hawking insects nearby. Observing the adults ply their trade probably helps train the youngsters.

The barn swallow is the world's most widely distributed swallow. It breeds nearly throughout North America, well into Canada and even reaching Alaska, with some nesters as far south as Mexico. Elsewhere, barn swallows breed in Iceland, throughout Eurasia, northern Africa, parts of the Middle East, and China and Japan. The North American nesters winter primarily in South America, with some individuals even reaching the Galapagos Islands.