As always, click the photo for a larger version

A cliff swallow in repose on a fence wire. The animal is easy enough to photograph like this. When it's on the wing, creating an image is an entirely different matter. The difficulty level rises significantly.

I like wing-shooting (with camera) birds. It's a challenge to be sure, but finding potential subjects is easy. Some species are really pretty simple to nail in flight. Big sluggish flyers like bald eagles, great blue herons, or gulls don't represent a major challenge, other than getting yourself in range. 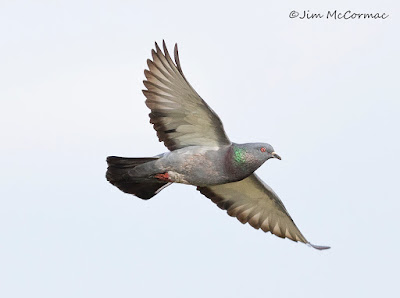 I shot this classic "blue-bar" rock pigeon this morning. It's the form closest to the wild version, but variation among rock pigeons is staggering. The site where I saw this animal hosts scores of pigeons and the different plumages are seemingly endless.

Anyway, this place has many swallows - barn, mostly, along with a handful of cliff and tree swallows - and these were my primary targets. I shot this pigeon photo partly as an antidote to the frustrations of trying to hit jigging and jagging speedster swallows, and partly because I think pigeons are cool. CLICK HERE for a detailed piece on pigeons that I wrote back in 2008. 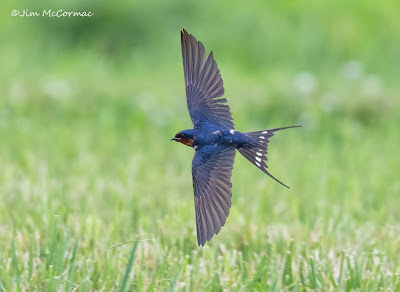 I made this image of a zigging barn swallow at top speed inches above the grass last evening. Out of many dozen images taken, I think I kept two. The discard rate is high when trying to make relatively crisp shots of fast-flying songbirds. 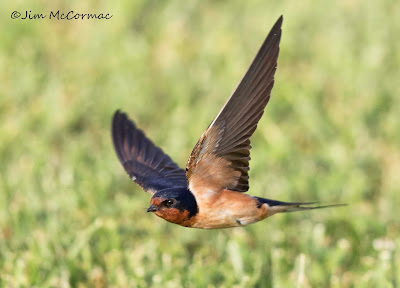 I went back this morning, and the light was considerably better than last evening's overcast conditions, but still not the bright cloudless early morning skies that I hoped for. Abundant natural light is essential, or at least a major asset, when wing-shooting swallows, for reasons I'll list in a bit. While the challenge of obtaining relatively sharp pleasing images of flying swallows is part of the reason I'm on a swallow kick and trying to up my game, there's a better rationale. I mostly try to use my photography for interpretation, and swallows and flight are as interconnected as the Wright Brothers and aircraft. We see these birds more often on the wing than at rest, and their whole stock in trade depends upon their aerial insect-catching prowess. A good wing-shot probably is more revealing of a swallow's nature than any other type of portrayal - it's just tough to get such an image. 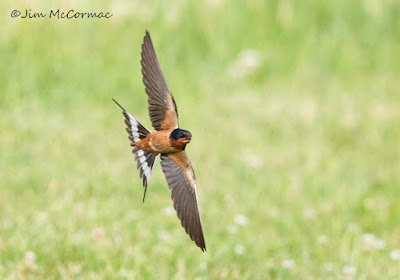 A barn swallow banks away from the shooter. Of my go-rounds of the past 24 hours with these birds, this one is probably my favorite.

If you're interested in trying your hand at swallow shooting (or birds in flight, in general), here are a few tips:

1) Find a spot with plenty of birds that tend to use the same area and follow predictable pathways.

2) The faster the lens, the better the odds of photographic strikes. Auto focus is a must, and it has to grab and lock onto the subject quickly. A camera with a fast burst rate is best. I used the Canon 5D IV, which fires about 7-8 rounds a second. A lens - prime or zoom - that is or can reach about 400mm is probably best for this sort of thing. I am fortunate to have recently got my hands on a Canon 400mm f/2.8 II lens, and it has me rethinking birds on the wing shooting. It's phenomenal, but plenty of other lenses can work.

3) Camera settings: Use manual mode, auto ISO, and AI Servo drive mode. When the shutter is half-depressed in AI Servo, it stays locked on and tracks the moving subject, as long as the camera is kept on the subject. Back-button focusing is far better; if you're unfamiliar with that, CLICK HERE. If your camera allows for a range of focus point options, pick the center point and a block of four surrounding points. Creating a small tight block of focus points increases the likelihood of a hit, but having all of them activated means that your camera would likely grab some object other then the bird. If your focus point options are limited, select the center point only. You'll probably have to dial in a fair bit of exposure compensation. I was at about +1 for these images. Shoot the camera wide-open or close to it. I made these at f/2.8, but had light allowed for it, I would have stopped down to f/4. Shutter speed has to be really fast, as in somewhere between 1/2000 and 1/4000. The ISO value should be displayed in your viewfinder and keep an eye on it. If mine reaches 1600 or so I'll usually try and rein it in by lowering the shutter speed - and/or opening the lens more if possible. I much prefer an ISO under 1000 but that's not always possible. This is why abundant ambient light is best for doing this sort of shooting. The more light that enters the lens, the faster the shutter speed at a lower ISO.

4) Hand-holding is best. It's easier than trying to smoothly track an erratic fast-flying bird with a tripod-mounted rig. Needless to say, make sure your lens' image stabilization is turned on.

5) Pick up the bird WAY out, lock focus on it, and track it as it moves your way. When the bird gets near, hold the shutter down and fire away. Pan as smoothly as possible, trying to keep focus locked. Swallows are tough, though, as they're prone to sudden jigs and jags that make them impossible to accurately track. The good thing is swallows are relatively fearless and will routinely fly near to people, so a good locale should yield plenty of chances.

6) Spray away whenever a bird presents itself. Your keeper rate won't be good, but if you get one or two nice shots out of a hundred, that's quite a feat and you'll have a decidedly uncommon image.