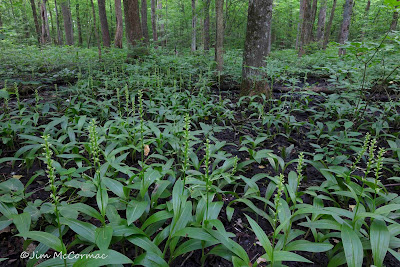 The greenish-white flowering spikes of tubercled rein orchid, Platanthera flava, arise among its thick strap-like leaves. Overall, this is an uncommon to rare orchid with isolated colonies. And it certainly isn't getting any more common.

I visited this beautiful tract of swamp forest in Hardin County, Ohio, back on June 18. The primary mission was to see this orchid, and it was at absolute peak bloom. And, as always on these field trips, I learned a lot that I didn't know. 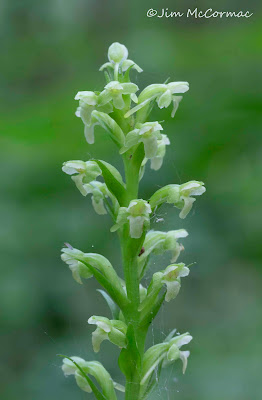 A close-up of one of the flowering spikes. The Orchidaceae is the world's second largest family of flowering plants, eclipsed only by the massive sunflower family (Asteraceae). There are about 20,000 orchid species thus far described. Peak diversity occurs in equatorial/tropical regions, and numbers drop considerably as one moves north. There are 46 native species in Ohio (and one nonnative), or 47 if you are a splitter.

While a great number of orchid species are truly flashy plants with extraordinary colors and shapes, our perspective is skewed by those that are frequently in captivity and hybrids thereof. These plants generally are incredibly showy. Many species, however, require close examination to appreciate their subtle beauty. Such as this tubercled rein orchid. 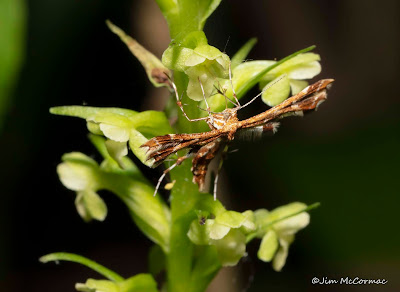 It didn't take long to notice that a great number of very small moths were working the flowers. They turned out to be grape plume moths, Geina periscelidactyla. These moths are so elfin that when in flight they could easily be misidentified as mosquitoes. I probably saw 40-50 moths working the flowers, and there were undoubtedly more.

Orchid flowers often have long nectar spurs, and this flower morphology represents an evolutionary relationship with moths. In order to access the nectar at the bottom of the spur, the would-be pollinator must have a very long, flexible proboscis. If you enlarge the photo above and look closely, you'll see the moth's long "tongue" disappearing into the access port for the nectar spur. Then click on the previous photo and look at the flower at the top right of the inflorescence. You'll see the very long slender nectar spur jutting out to the left, towards the stem, and now one gets a sense of how long this moth's proboscis must be to reach the base of that. In the course of accessing nectar, the moth presumably pollinates the flowers.

As implied by the moth's common name, its caterpillars feed on grape and Virginia creeper (also in the grape family). Thus, the moth is common as its host plants are ubiquitous. All five Ohio grape species (Vitis) and both creeper species (Parthenocissus) are native, and collectively they do much heavy lifting when it comes to underpinning food webs. A great many moth species depend upon their foliage as food for the larval stage, and as we've seen here, one of those moths then apparently helps provide pollination services for a rare orchid.