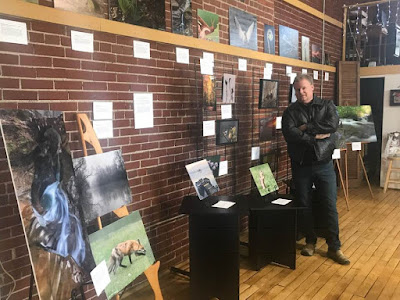 Last Friday was an interesting and diverse day. Here I am in the Art Loft, a gallery in downtown Zanesville, Ohio, surrounded by thirty-one of my natural history photos. I was invited to exhibit by one of the gallery's owners and artists-in-residence, and I certainly appreciate the opportunity. This section of the city has evolved into a thriving cultural hub, with some thirty art galleries in close proximity. This evening was their monthly First Friday Art Walk, and dozens of people came through to view the pieces on display, and it was a great opportunity to meet lots of interesting folks. My works will hang through December, and the Art Loft is full of interesting pieces created by the four resident artists - Linda, Sandy, Susan and Susan. Stop by sometime. 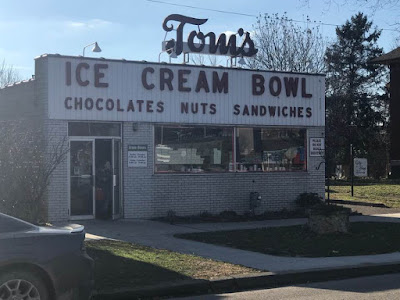 If you're in this area, this place is only a few minutes away. The legendary - and I mean LEGENDARY! - Tom's Ice Cream Bowl has been at this location since 1948, and there's good reasons why it has had such staying power. The food is great, and it's only topped by their famous homemade ice cream. It seems that everyone I know in the world has been here at some time, but Friday was my inaugural visit. I'll be back. 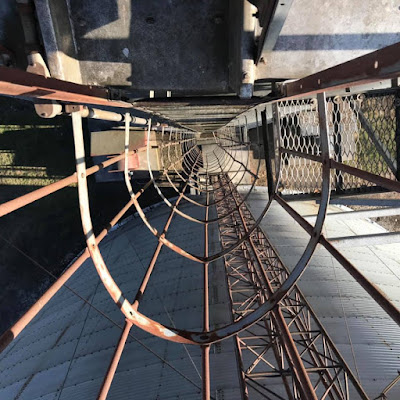 I had long noticed a towering grain silo in the area that (I suspected) offered a grand vista of some notable landscapes around Zanesville. The owner of the facility was gracious in accommodating my request to scale the seven-story silo to assess the summit's photographic potential. Unfortunately, there aren't any elevators offering an effortless ascent - or descent - so climbers must ascend this vertical ladder. Doing so gave me a much heartier appreciation for the men who routinely climb this thing and the other silos to service them. It's a workout. This is an iPhone shot from the roof, looking down the ladder, which I thought was architecturally artistic. I hope to return sometime, if permission is re-granted, with real camera gear in tow. Some potentially great images could be created up there.

As the lucky stars would have it, this evening turned out to be a New Moon, AND a nearly clear night! That meant dark starry skies, and less than a half-hour from the Art Loft is The Wilds and thousands of acres of surrounding reclaimed strip mine lands. This is the area that I wrote about in my last post, HERE. Although it would make for a long day, the allure of astrophotography was too great to pass by, so off I went into the cold (hit 18 F that night!) star-studded evening following the gallery exhibition. Myriad stars, seemingly embedded in a celestial agar, dot the southern sky. In spite of this site's remoteness and apparent darkness, light pollution cannot be avoided, like everywhere else in Ohio. The distant orangish glow on the horizon probably emanates from the town of McConnelsville.

Astrophotography is not easy, and I am very much the piker when it comes to shooting night skies. Most of the work lies in the setup. Due to the very long exposures, a tripod is essential, it goes without saying. Framing the image is challenging, as it's obviously hard to see landscape features well given the lack of light. I use a flashlight and a bright green laser to help orient my camera during the setup procedure. Just pointing up at the sky and failing to include terrestrial features would make for a boring photo. Here, I used the road as a leading line, and I liked that lone cottonwood tree in the distance. While an old building or structure can be very cool as a ground-bound anchor point, this is what I had to work with in this area. One of the trickiest bits is acquiring sharp focus. That usually takes me at least several test shots. I start at the infinity stop (the little hourglass marking on the lens's focus meter), but that position is never the sharpest. From there, I just dial the focus slightly either way, evaluating the results under magnification in "live view" on the back of the camera. One can also magnify live time in live view to assess star sharpness, but I like to take the actual photos and use them for evaluation. Make sure your lens is set to manual focus and if it has image stabilization, turn it off. Either, if active, can cause movement during exposures.

This image, being a single "still" to show the countless pinpoints of light, was made with a 13-second exposure. Any longer than that, and the stars will manifest a smudginess as apparent star movement will set in with longer exposures. The earth's rotation can be used to advantage as in the following image, but no movement was the goal here. I used my Canon 5D IV and Canon 14mm lens. The latter is widely panned as astrophotography glass, and it certainly has its weaknesses, but passable night sky images can be created with it. At its widest, the 14mm is an f/2.8 lens, and that's OK for night shooting (the wider aperture the better, as it allows for more light harvesting). The rub is, the lens is not tack sharp at f/2.8 and will not render crisp stars. Thus, it must be stopped down a complete stop, to f/4, which sharpens it up considerably but at a large loss of light. This required an ISO of 4000 to harvest enough light to make the shot work. The best Canon astrophotography lens I know of is the 24mm f/1.4. I have it, and stopped down to f/2.8 or so it is scary sharp. But tonight was for experimentation with the 14mm, which does have the advantage of a much wider angle.

A brief play of a flashlight beam down the road gave the lane a bit of a glimmer. 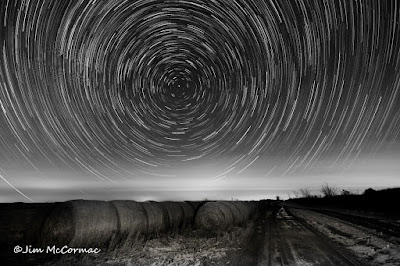 This image is a composite of 120 30-second exposures, fused together to create "star trails". The celestial anchor point is the North Star, Polaris. At true north, it stays in alignment with the Earth's axis and our rotation creates the effect of the stars revolving around Polaris. Light pollution, mostly from the distant city of Zanesville, whitens the horizon - nothing to do about that. The road and round hay bales served as ground-bound leading lines. Brief flashlight light painting slightly brightened the foreground.

In addition to the inescapable light pollution (in Ohio at least), another manmade problem for astrophotographers is airplane traffic. And, I learned, there is LOTS of that in these particular skies! Planes will leave unsightly and very unnatural dotted trails across the image. and in the case of this hour-long exposure there were many. It would have looked terrible if they were left in the image. The solution to that is easy but time-consuming. One must use Photoshop or some other editing program to blot out the airplane trail on every individual image on which they occur before fusing them together. In this case, of my 120 exposures, plane trails were manifest on several dozen of them.

I look forward to some future excursion to the truly dark skies of the western U.S., such as some of the federal lands in Utah, to attempt some real dark sky photography.