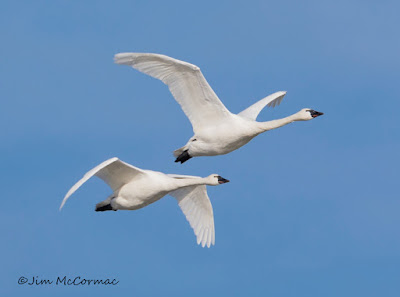 Like avian clockwork, the first icy northern winds of late November and early December sweep in flocks of migratory tundra swans. The exuberant war-whoop calls of flocks high aloft evokes a sense of untamed wilderness and sparks the listener to scan the ether seeking the source.

A tundra swan is massive. Measuring nearly 4½ feet in length, with a wingspan pushing 7 feet, a well-fed male (males are slightly larger than females) can weigh 23 pounds.

By comparison, a bald eagle averages about 2½ feet in length and weighs 10 pounds, although the wingspan is about the same. Trivia: It would take over 3,000 ruby-throated hummingbirds to equal the mass of a big tundra swan.

On a recent trip to the former Sandusky Plains of north-central Ohio, I encountered hundreds of swans. Flocks were plentiful in the collective 15,000 acres of Big Island and Killdeer Plains wildlife areas, and in flooded fields between these sites.

The two wildlife areas are about all that’s left of the wetlands of the Sandusky Plains. The former wet-prairie region once blanketed much of Crawford, Marion and Wyandot counties, but nearly all of its rich soil has been converted to beans, corn and wheat.

Nonetheless, ancestral instinct is strong and the swans still use the Sandusky Plains as a migratory way station, in spite of the prairie largely being swept away in the past century or so.

The giant birds are an on epic journey. Well-named tundra swans breed in the Arctic, the nearest nesters at least 1,100 miles to our north. Some that pass through Ohio might have bred over 2,000 miles north — nearly the distance from Columbus to Los Angeles.

Most of the swans that visit Ohio will travel to coastal areas along the eastern seaboard, mostly from New Jersey to the Carolinas. In total, these powerful flyers will have made a one-way flight of up to 2,500 miles.

Many of the swans that I observed were family units: snowy white adults accompanying dusky-necked juveniles. The youngsters must be shown the migratory ropes. Unlike many songbirds, which have built-in GPS and can make inaugural migrations unaided, swan cygnets require coaching. The adults remain with their offspring until they return to tundra nesting grounds the following spring. By then, migratory corridors are firmly stamped into the youngsters.

Tundra swans commence breeding when they are 2 to 3 years old. Once a pair bond is established the swans remain monogamous, although new mates might be taken if one of the pair dies. These relationships can be long-lived. The oldest documented wild tundra swan was nearly 24 years old, a female that was banded and later recaptured in Ohio.

Lewis and Clark first described the tundra swan on their western expedition of 1804-06. Struck by the peculiar fluting hum created by the swan’s wings in flight, they dubbed this species the “whistling swan.”

That charismatic name stuck until 1982, when ornithologists rebranded it. The scientific name, Cygnus columbianus, remains, the specific epithet recognizing the Columbia River of the Pacific Northwest, where Lewis and Clark’s team obtained the first specimen.

White swans, swirling in like giant snowflakes on Arctic breezes, serve as elegant reminders of a natural world that doesn’t recognize political boundaries.