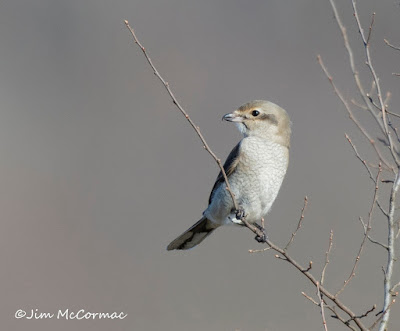 Vlad III ruled the medieval kingdom of Wallachia, since subsumed into Romania, multiple times between the mid- to late 1400s. His nom de guerre was Vlad the Impaler, which hints explicitly at his ferocity. Vlad’s modus operandi was to impale enemies on tall poles, which tended to intimidate other would-be attackers.
I recently saw a feathered Vlad, a diabolically fierce songbird known as the northern shrike. A common nickname is “butcher bird,” and like Vlad the Impaler, the shrike has earned its homicidal sobriquet.

While trolling a country road near the Wilds in Muskingum County recently, I was pleased to spot a northern shrike teed up atop a young black locust. It paid me little heed, allowing for close approach and photos, one of which accompanies this column.

Northern shrikes breed in tundra and taiga regions far to our north — the closest nesters are 700 miles away. This species occurs in Ohio only as a rare winter visitor, with most records in the northern tier of counties. Muskingum County is at the southern limit of their range, but shrikes have been found annually in the region’s vast reclaimed strip mines for many years now.

The bird I discovered was a pale brownish juvenile, born last summer. Most northern shrikes that occur here are adults, with sleek black, gray and white plumage. The face is accented with a rakish black mask, a la Zorro. Perhaps most notable is the bird’s thick, hooked raptor-like bill.

Although a northern shrike is slightly smaller than a robin, it packs a brutal punch. Nothing its size or smaller is safe. A hunting shrike scans for any movement, and if it spies a mouse, songbird or, in season, large insect, its reign of terror commences.

An attacking shrike quickly drops from its perch and flies rapidly toward its victim. Once there, it engulfs the prey in a fury of feathers, seizing it with powerful feet and bill. The coup de grace is a strong bite to the neck, which severs the cervical vertebrae.

Shrikes are capable of chasing down flying birds, sometimes notably larger species such as blue jays. Perhaps the largest documented kill was a rock pigeon, which weighs more than four times as much as the shrike. A particularly savage shrike was once documented chasing a mallard duck, a bird that outmasses it by a factor of 17! This is more extreme than Peewee Herman chasing Mike Tyson, with their personas switched, of course.
Victims are typically taken to a thorny locust, barbed-wire fence or similar spiky object. The prey is unceremoniously impaled, after which the shrike commences to tear it asunder, typically starting with the head.

Sometimes prey is wedged into the forks of shrub branches rather than impaled, faint consolation for the victim, I’m sure. I once saw a shrike that had just captured a chunky rodent known as a meadow vole. It was an amazing spectacle to watch the bird aerially trundle along with mammal, which matched it in weight. It tucked the dead vole into a shrub and set out again, to return later to consume its furry cache.

As homicidal as shrikes seem, we shouldn’t judge them like we would a human Vlad the Impaler. Should you be lucky enough to spot one, relish the opportunity to witness the rare songbird.

‒ Glen Apseloff of Powell has produced his second book about the feathered tribe, “Backyard Birds and More: Looking Through the Glass.” It offers synopses of dozens of species of birds that commonly visit yards, peppered with excellent photos. Common mammals and insects are also included. The book, $12.95, can be obtained from Ohio Distinctive Publishing: www.ohio-distinctive.com/books.html or by emailing books@ohio-distinctive.com.


‒ Glen Apseloff of Powell has produced his second book about the feathered tribe, “Backyard Birds and More: Looking Through the Glass.” It offers synopses of dozens of species of birds that commonly visit yards, peppered with excellent photos. Common mammals and insects are also included. The book, $12.95, can be obtained from Ohio Distinctive Publishing: www.ohio-distinctive.com/books.html or by emailing books@ohio-distinctive.com.