Monarch from egg to butterfly: A pictorial transformation 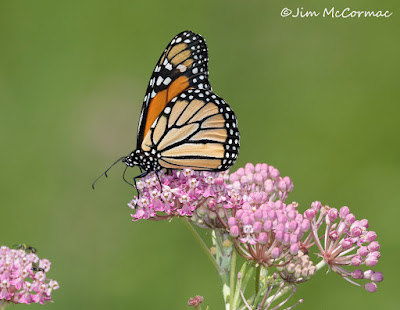 One of the world's most iconic butterflies, the monarch, Danaus plexippus. These conspicuous insects are revered by large numbers of people, and recent conservation efforts to help declining populations of the migratory eastern populations seem to be bearing fruit. Scores of people are helping by either planting milkweed, or raising and releasing butterflies. Loss of habitat and host plants is a huge factor in the monarch's decline, with increasingly environmentally-unfriendly agricultural practices probably playing the largest role.

The butterfly in this photo is seeking nectar at swamp milkweed, Asclepias incarnata, which is also a favored host plant. Monarchs will lay eggs on nearly all of Ohio's 15 species in the milkweed subfamily, though. 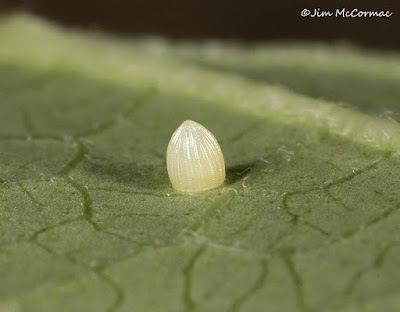 Butterflies have a four-part life cycle, and phase one of the monarch's begins with a tiny egg deposited on the underside of a host plant's leaf. I shot this egg last weekend in Greene County, Ohio. A female was ovipositing on honey vine, Cynanchum laeve, right outside the Midwest Native Plant Conference, so I briefly borrowed an egg for photo purposes. Honey vine is a native albeit somewhat weedy member of the milkweed family, and monarchs frequently use it as a host plant. This egg is hot off the presses; in about four days a tiny caterpillar will emerge. 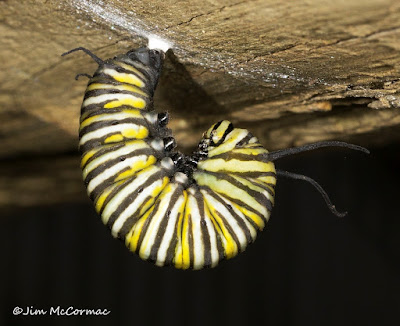 After the caterpillar eats its way to maturity (takes about two weeks) on milkweed foliage, it finds a sheltered spot to morph into a miraculous chamber of transformation, the chrysalis. Just before commencing the transformational process, the caterpillar attaches itself via a sturdy pedicel and curls into a J-shape. 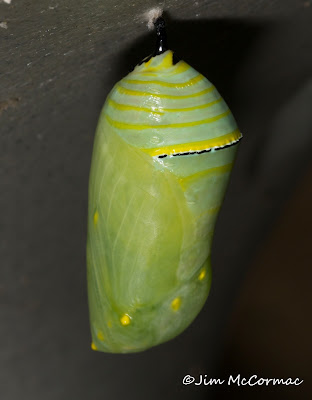 Few butterfly chrysali are as showy as that of the monarch. This is a very fresh chrysalis, and it looks like a jeweled and gilded piece of art. An incredible reorganization of tissues takes place within, with the caterpillar changing to a creature very dissimilar in appearance. 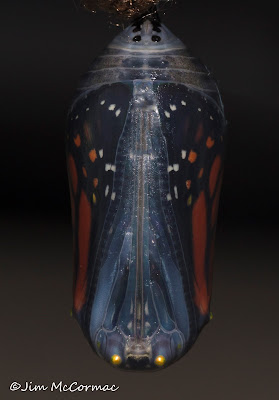 After about ten days, the caterpillar has reassembled itself as a butterfly, and is ready to emerge from the chrysalis. This image was taken shortly before the butterfly popped free.

NOTE: Barb Huebner was kind enough to give me five monarch chrysali in various stages of development, so I could make photos of the emergence process. This is one of them. Barb raises scores of monarchs, all of which are released back to the wild. She gets the caterpillar livestock from milkweeds growing wild in her Columbus, Ohio yard. By raising caterpillars in a protected environment, survivorship soars as the caterpillars are removed from the risk of being killed by various predators, many of which are other insects. Her work and similar efforts by legions of others is almost certainly bolstering monarch populations. 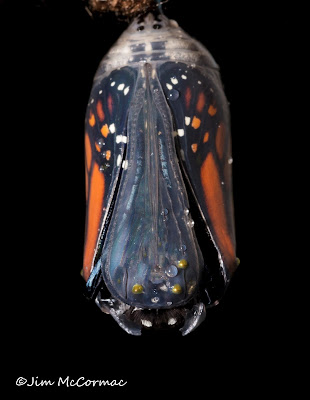 If you want to catch the entire eclosion (emergence from the chrysalis) process, you've got to pay nonstop attention once the chrysalis looks like it does in the previous photo. Here, two fissures appear in the chrysalis, forming a V-shape. 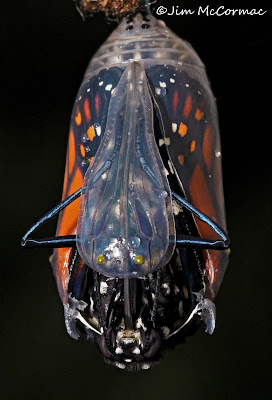 Now we can clearly see the teardrop-shaped escape hatch with its two gold dots at the base being pushing outward by the emerging butterfly. The butterfly's head is at the bottom, and you can see its proboscis, or tongue, extending upwards into the chrysalis.

Things happen very fast at this point, and I was popping off shots every few seconds. 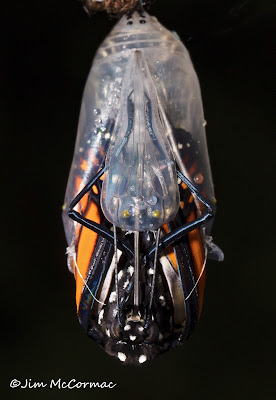 A few seconds later and the butterfly has squeezed considerably more of its bulk from the case. Two think whitish cords can be seen emerging from either side, below its head. These are the trachea - hollow tubes that conduct oxygen into the pupal case. They are no longer needed once the butterfly has freed itself of the confines of the chrysalis. 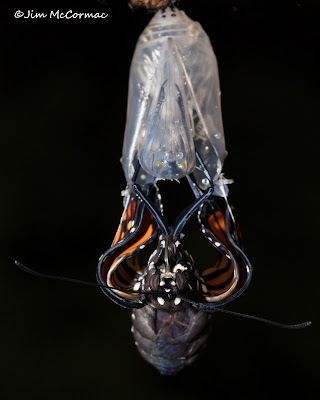 The butterfly's wet and folded wings begin to emerge, as do the legs and its entire body. Its head is facing right at the camera, and its abdomen is horizontal and facing away from the camera. 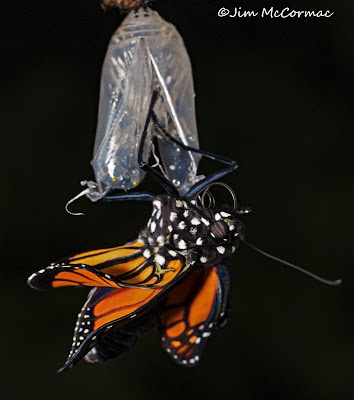 Just a few more seconds and the butterfly has dropped free and is hanging upside down on the spent chrysalis. It is rapidly pumping liquid from its swollen abdomen into the wings, causing them to expand and eventually harden. 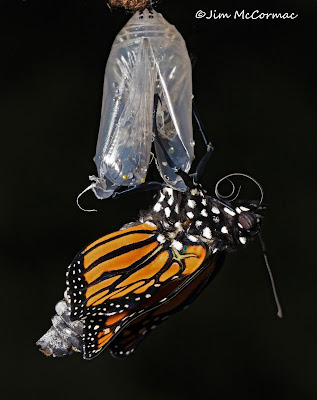 We can see the tip of massive abdomen, which immediately post-emergence is greatly swollen. Once the butterfly has thoroughly filled its wing veins with liquid from the abdomen, it will purge excess abdominal fluid. Several globs of greenish liquid will be expelled, after which the abdomen will be much more slender. 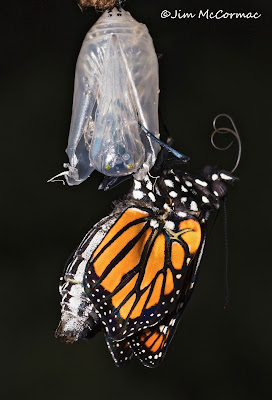 The butterfly quickly commences to climb up the side of the former chrysalis. Its already powerful legs allow it to cling with great tenacity. At this point the butterfly is damp, soft, utterly unprepared for flight, and quite vulnerable. 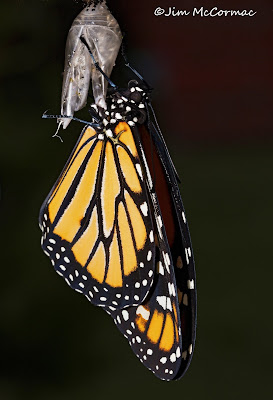 After a half-hour or so from the time of emergence, our monarch looks like this. It still isn't ready for its inaugural flight, but it will be within a few hours. This one was safely liberated and will hopefully make the fantastic several thousand mile flight to the oyamel fir forests of central Mexico. There it will join millions of other overwintering butterflies, and they will commence the annual invasion of the U.S. and Canada early the following spring.