A bizarre aspect of the gray hairstreak

A week or so ago, I visited a place I seldom see, Erie Sand Barrens State Nature Preserve in Erie County, Ohio, which is not far inland from Lake Erie. The place abounds with biodiversity, including many rarities, especially plants. It was there I was finally able to photograph a very unusual feature of a common butterfly, as follows... 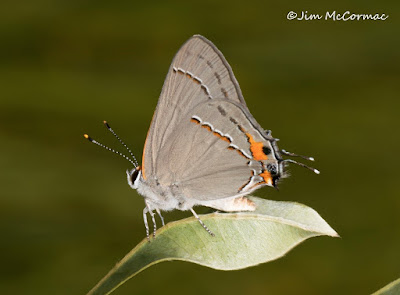 One of our showiest - and commonest - hairstreak butterflies, the gray hairstreak, Strymon melinus. These tiny butterflies are widespread throughout Ohio, and beyond, but can easily be overlooked unless you're paying attention to the little stuff. A fresh animal, such as the one above, could win a lepidopteran beauty pageant. They're sleek in a smooth coat of dove-gray, ornamented with black and white dashes and orange dots. Orange-tipped antennae are banded like a barber pole.

Perhaps most interesting is the aft end. A peculiar pair of pseudo-antennae jut from the hindwings like tails. These appendages are the trademark of most, but not all, hairstreaks. Just forward of the "tails" are colored marks that often resemble eyes. The theory for these adornments, it is often said, is to create the effect of a false face. The overall effect is reinforced by the butterfly's habit of constantly rubbing its hind wings together, thus wriggling its "antennae". I buy into this premise as it's common to see hairstreaks with a v-shaped chunk snapped out of the rear wings - the work of predatory birds who were duped. The bird ends up with a bit of scaly wing; the butterfly escapes.

A few years ago, I was in the field in Adams County with John Howard, and he showed me an amazing video he made of a gray hairstreak. It was taken from a rear perspective and showed well the butterfly as it moved its pseudo face. The overall effect was remarkable, and ever since I've been trying to photograph this look. It isn't easy to capture in a still photo and I've bungled many a shot. 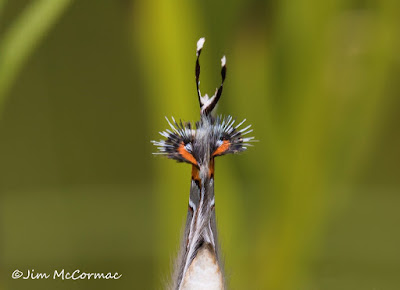 The same gray hairstreak in the previous image, seen from behind and below - the same perspective that certain would-be predators might view the butterfly. The look is utterly remarkable, at least to me. Small fringed flanges at the terminal end of the hindwings jut out to the sides, and their colored pattern makes them look eerily like eyes. The tails project overhead to create horns. The tip of the abdomen and the space where the wings tent together make for the look of a dark frowning mouth. The overall impression is much more pronounced in life, as the movement of the butterfly's wings causes the eyes and horns to move about like an animated face.

Does this miniature monster create a visual deterrent to predators? Who knows, but one must ponder why the gray hairstreak would have evolved such a fabulous architecture.

Fascinating. I have wondered about those since the first time I spotted one several years ago. Love the picture of the tail.

I have photographed the same image on my mint plants of the hairstreak but I thought it looked a lot like the bulging eyes of a praying mantis and its antenna. Guess i was influenced by the praying mantis I photographed on the next bush. Very cool images.