Cape May Warblers, and the Friends of Magee Marsh 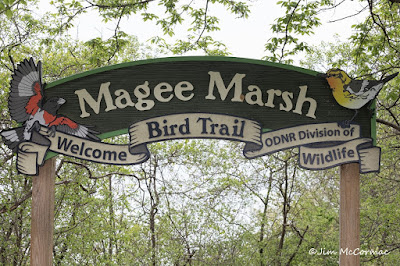 A fabled place, especially at this time of year. Tens of thousands of birders make the peregrination to western Lake Erie, especially Ohio's Lucas and Ottawa counties, and stop #1 is a mile-long boardwalk that bisects a lakefront patch of swamp woods.

Owned and managed by the Ohio Division of Wildlife, the Magee Marsh Bird Trail can be akin to birding in an open-air zoo aviary. Scores of warblers and other songbirds fill the woods, and can often be seen at arm's length. Fixated on feeding to fuel the long flights ahead, and replenish fat deposits lost in the long migration to reach this point, the birds are little concerned with the throngs of human admirers.

I was up there over the weekend, and the birds put on a heckuva show. At least 29 warblers species were seen, most in large numbers. The rarity highlight among that crowd was a vagrant black-throated gray warbler - one of relatively few Ohio records.

Many visitors commented on the sparkly new look to the boardwalk. We can thank the Friends of Magee Marsh (FOMM) for that. This nonprofit exists to provide support and help make improvements to the marsh and its infrastructure. FOMM embarked on an ambitious two-year fundraiser to replace the aging boardwalk, ultimately pulling in several hundred thousand dollars and seeing to the complete replacement of the boardwalk's planking. That work benefits scores of people who visit Magee Marsh from all over North America, and far beyond. Support the Friends of Magee Marsh - details on the organization RIGHT HERE. 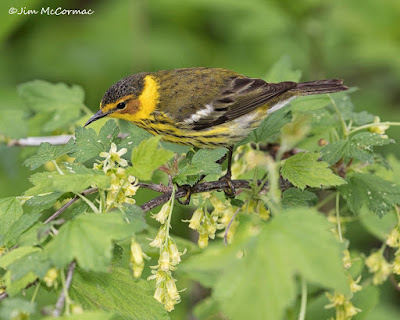 This spring, the stars of the warbler parade have been Cape May warblers. Here, a male forages in a patch of American black currant, Ribes americanum. A male Cape May warbler is a thing of great beauty; a colorful dynamo packaged in an 11-gram bundle of chestnut, yellow, black and green feathers. Charcoal tiger streaks complete its exotic appearance.

It is no coincidence that the bird in the photo above is in a patch of currant. And, once again, we have the Friends of Magee Marsh to thank for this. Read on... 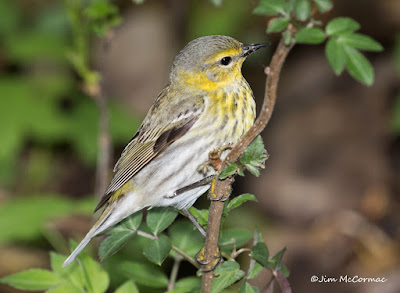 A week or so after the first male Cape May warblers return from their Caribbean and Central American wintering haunts, they are joined by the females. The lass in this photo perches on an elderberry, Sambucus canadensis, another native plant found along the boardwalk.

Over time, the woods along the Bird Trail became choked with nonnative flora, as happens to so many of our habitats. Two of the worst botanical offenders were bush honeysuckle, Lonicera morrowii and others, and garlic mustard, Alliaria petiolata. These species are highly aggressive and crowd out the native flora. Not only that, they are also allelopathic - the plants produce growth-inhibiting enzymes from their rootstocks that impedes or eliminates the growth of competitors.

The upshot was a sea of nasty invasives along the trail, and very little native flora other than the overarching trees. Until the FOMM began an orchestrated and labor-intensive project to eradicate the nonnative flora. This work began about five years ago, and FOMM members keep on top of things with regular eradication sweeps.

Their work has been highly successful. There's hardly a weed to be seen these days, and the response of native flora - the species vanquished by the nonnative invaders - has been astonishing. Spring wildflowers have returned, along with jewelweed, native nettles (they play host to red admiral butterfly caterpillars!), and many other kinds of indigenous flora. Along with the major spike in botanical diversity has come a marked increase in value to birds and other wildlife. 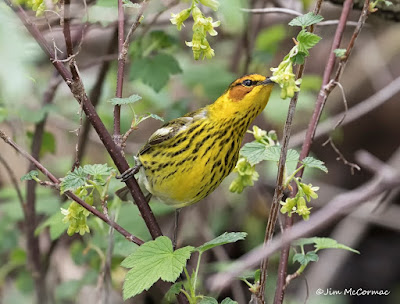 Back to the American black currant and Cape May warblers. While the currant had nearly been eliminated when the invasives were at their worst, it has bounced back with a vengeance. Everyone who birds the trail can't help but to notice it. A small shrub, the currant is bedecked with dangling clusters of small yellowish flowers and is showily conspicuous.

What nearly everyone this spring has also noticed is the fixation of Cape warblers with the currant flowers. In this photo, a male plumbs the depths of a blossom with its slender bill, drawing out nectar with its semi-tubular tongue. Cape May warblers are big consumers of flower nectar, and the proliferation of currant plants along the boardwalk has given them back a large and important food source at a critical place and time in their long migratory trek to the boreal forests of the extreme northern U.S. and Canada. Once there, they specialize on spruce budworm caterpillars and I assume last summer saw large outbreaks of those caterpillars. The number of Cape May warblers seen this spring in migration has been astounding, likely due to high breeding success triggered by abundant food crops on the breeding grounds last year.

Cape May warblers aren't the only beneficiaries of currant blooms. Other warbler nectar-feeders include Nashville and Tennessee warblers, along with northern parula. This tale is an excellent and clearcut example of the value of native plants, and the often ornate ecology that binds plants and animals. Working to eradicate nonnative invasive plants is tough and time-consuming, but obviously can bear rich fruit.

Thanks once again to the Friends of Magee Marsh for their hard work, and I'm sure the warblers send their thanks, too. Again, for information about FOMM, GO HERE.

It was great to see you there! The birding was fantastic. Thanks to FOMM and all who make special places like this available and nice for those who visit.

You've captured the feeling exactly with "akin to birding in an open-air zoo aviary". Thanks for all the useful information. Loved the Cape May Warblers and the currant flowers. I'll be searching the native plant section at the nursery for a few of those.