A gorgeous Red-necked Grebe, Podiceps grisegena, plies the waters of Funk Bottoms Wildlife Area in Wayne County, Ohio, last Saturday.This big grebe could rightly be termed a rare bird in Ohio, and all sightings are noteworthy. We get them every year, but normally in very small numbers.

But not this spring.There have been dozens of reports of Red-necked Grebes in Ohio, from the Ohio River to Lake Erie. Anywhere there was open water, there was a decent chance that one of these swan-necked grebes could be found. I haven't attempted to add up all of the reports, but the number of birds must run into many dozens; possibly pushing 100. Without doubt, if it isn't the biggest incursion of Red-necked Grebes into Ohio (and throughout much of interior eastern North America), it is a near-record flight. Red-necked Grebes winter in marine coastal habitats, and to a much lesser extent, on open waters of the Great Lakes. According to this map, Lake Ontario would be the freshwater wintering hotspot. Following is an excerpt from the Birds of North America monograph on Red-necked Grebe:

Of the birds that move east from the breeding grounds, the major flyway is right through the Great Lakes. My hunch, which is not exactly rocket science, is that far more of these grebes pass through Ohio than are ever detected, and I suspect that large numbers completely overfly our state. Red-necked Grebes are powerful flyers, and can cover long distances in a single flight. Furthermore, with few exceptions (such as great diurnal movements on Lake Superior in fall), the grebes migrate at night. 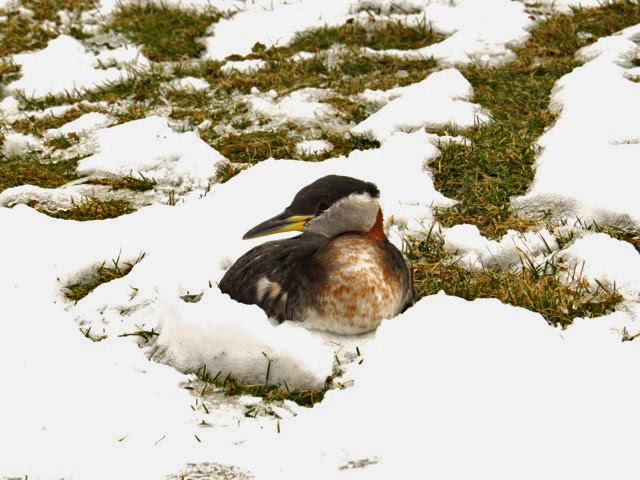 Red-necked Grebes are prone to mistaking icy fields, roadways, and other reflective surfaces for water, and setting down on terra firma. Once grounded, they have no hope of taking off. The bird in this photo was found in a field in Holmes County. It was indeed fortunate in that Dennis Troyer and Robert Schlabach were alerted to its presence, and those gentlemen were able to see to its rescue and relocation to a nearby area of open water. Many grounded grebes are not as lucky, and mass groundings can cause significant mortality.

An interesting question involving the grebe invasion is whether these are birds that were forced off the Great Lakes, or are spring migrants. We also were bombarded with record numbers of Long-tailed Ducks and White-winged Scoters, and I don't think there's much question that those two species were pushed inland by the near-complete freezing of the Great Lakes this winter. I wrote about those two HERE.

However, the scoters and Long-tailed Ducks began appearing in numbers in January. With just a few exceptions, the grebes didn't bombard us until early March - well after the sea duck invasion had become established. Red-necked Grebes are early migrants, and that timing fits with their spring migration pattern. Perhaps they are birds that pushed north as usual from Atlantic coastal areas, encountered the deep freeze of the Great Lakes, and were forced to stage a retreat, thus ending up on open waters throughout the east and south of the Great Lakes.

Winter ice cover on the Great Lakes apparently reaches its peak in early to mid-March, and it may be that changing ice conditions on Lake Ontario this month forced overwintering grebes off that lake and into inland areas.

Whatever the reason, birders were thrilled by scores of Red-necked Grebes, and we'll probably have to wait some time to witness another incursion of this scale. The Red-necked Grebe invasion also provides another example of a species in which we have a less than complete understanding of its life history.

As one from way up north, I can vouch for the fact that things don't freeze "peak" until March. We are still having below zero nights. I guess I'm glad somebody gets to benefit from it with rare sightings. Enjoy!
:D

I was photographing a Red-necked Grebe at Foundation Park in Mt. Vernon this past Sunday, and one reason they might slip by unnoticed was very apparent.
This Grebe would submerge for between 30 seconds to a full minute, and when he popped back up again it was usually for less than 15 seconds.
He was under water four times as much as he was above it!
I'd been watching a pair of Pied-billed Grebes for half an hour, when suddenly the Red-necked Grebe popped up from out of no where. They are the "Silent Service" of the bird world, and could swim right by you unnoticed.