The skeleton of a Green Ash, Fraxinus pennsylvanica, is tagged with a sign telling us what caused its demise.  The Emerald Ash Borer (EAB), Agrilus planipennis, is an Asian wood-boring beetle in the Buprestidae family. It was first detected in southeastern Michigan, adjacent to Ohio, in 2002. The bug quickly spread like wildfire, and was found in Ohio in 2003. It's gone far beyond Ohio; as of early December, EAB has been documented in over 20 states (CLICK HERE for a current distribution map).

EAB larvae are phloem feeders, and these grubs bore elaborate galleries just under the bark, as seen in the photo above. The end result is that the tree eventually can no longer uptake water and nutrients and it dies. In the Midwest, Green Ash and White Ash, Fraxinus americana, are the most common ashes and thus the most frequently killed, but EAB does not discriminate. Our other three species (in Ohio) are also destroyed.

The ash borer lays waste to ash trees on an incredible scale. The above photo is of a wetland along Lake Erie's Sandusky Bay, taken in August 2011. In places, it's like winter in summer due to all of the dead ash. That area and much of northwest and central Ohio look even worse now. Where I live, in the center of the state, nearly all of our ash are gone. The city of Columbus removed most of the dead ash husks along the streets in my neighborhood within the last year.

As ash trees can comprise up to 40% of forest communities, especially in low-lying damp areas such as in this photo, the impact of EAB is extreme. There most certainly will be losers, in addition to the ash themselves. A host of moth species are ash-dependent; their caterpillars must feed on the foliage of these trees. Their prognosis is dicey at best, and we may lose a number of these animals. There are undoubtedly many other ash-dependent organisms as well. Any genus of tree as prolific as are the ashes will serve as important keystones for many animals.

The downfall of ash will also spawn some winners, at least in the short term. An obvious group of beneficiaries are woodpeckers. The fat juicy EAB grubs are easily available to these chisel-billed hammerheads, and woodpeckers quickly learn to exploit this new food source. In fact, I believe it was abnormally high woodpecker activity that first alerted people to the initial infestation in Michigan.

Here in Ohio, there is little question that woodpecker populations are increasing across the board. This increase has been apparent for a while. I edited the winter season for the Ohio Cardinal for 2009-10, and made this comment under the Downy Woodpecker account, after noting that its Christmas Bird Count total was easily the largest ever reported: One must wonder what temporarily beneficial impact the runaway proliferation of the invasive Emerald Ash Borer is having on woodpecker populations.

A few recent papers SUCH AS THIS showing increases in certain woodpecker populations tied to EAB, and a recent media request seeking my opinion on the matter, prompted me to revisit the Ohio Christmas Bird Count (CBC) data. While problems may exist with CBC data, I think it works well in documenting woodpecker trends. Woodpeckers, for the most part, are easily identified, and rather conspicuous and likely to be found.

The following graphs represent the collective data of all Ohio CBC's from the years 2003 (onset of the EAB invasion) to 2012 (last year that CBC data is available). I threw in White-breasted Nuthatch, too, as these bark feeders are well known for taking wood boring grubs, including species in the Bupestridae. The results are telling. It'll be interesting to see what this winter's crop of CBC reports brings, but it'll be a while before all of that data is accessible. Likewise, the summaries of woodpeckers for the Ohio Breeding Bird Atlas will be interesting, and the Atlas book should be out sometime in 2014. 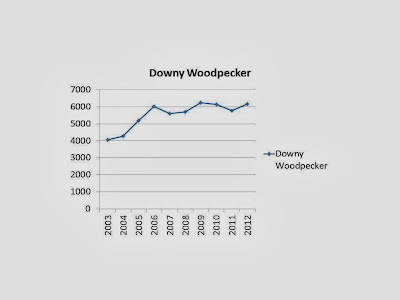 Downy Woodpecker is the most abundant of the six common breeding woodpecker species in Ohio. Last winter's CBC total was the 2nd highest ever reported, and showed an increase of 52% over 2003. 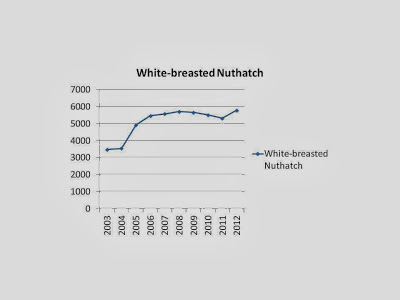 While not a woodpecker, obviously, White-breasted Nuthatches also exploit tree bark ecosystems and feed on beetle grubs at least occasionally. Their population is at record high levels, with an increase of 66% over 2003 numbers. 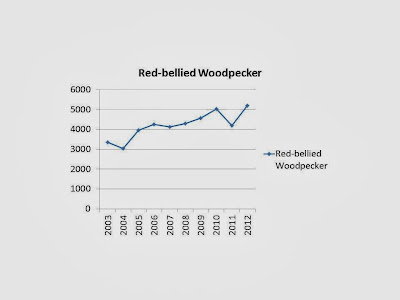 The Red-bellied Woodpecker is the second most common species of woodpecker in Ohio, and it's thriving. 2012 CBC totals were a 55% increase over 2003, and a record high count. 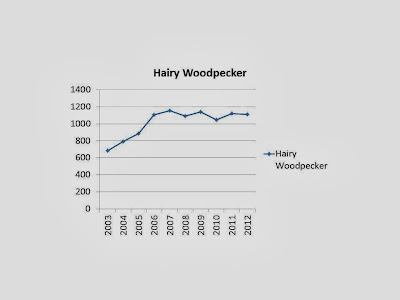 Hairy Woodpeckers are more strongly tied to large contiguous woodlands and mature trees than most of the other species, but they too are doing well. Their 2012 count was the 3rd highest, and a 62% spike over 2003 numbers. 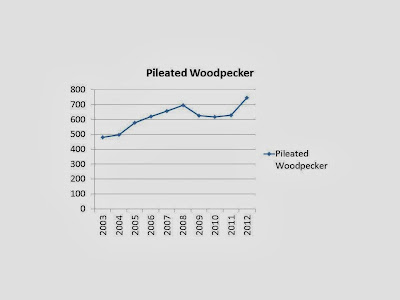 The giant Pileated Woodpecker, our largest species by far and an animal capable of wreaking havoc on wood-boring beetle grubs, is booming. Last winter's CBC tally was 56% higher than in 2003, and was a record high count. This species, like the Hairy Woodpecker, is probably benefiting from other factors too. As Ohio's forests continue to increase in area, and more wooded acreage reaches mature climax stage, this species continues to flourish and it was expanding its reach prior to the EAB invasion. 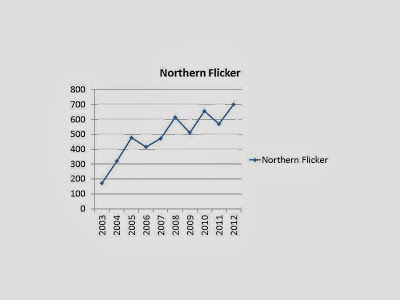 Northern Flickers also set a high count record on last year's CBC's and posted a jaw-dropping increase of 476% over 2003 totals. Other variables besides the availability of EAB grubs play into this one, though. Flickers are highly migratory and their numbers vary during Ohio winters. Weather and perhaps factors other than EAB may influence numbers of this species more profoundly than most of the other woodpecker species. 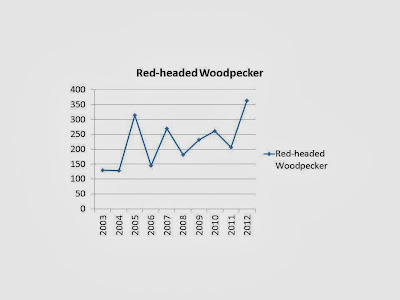 Red-headed Woodpeckers exhibit a peak and valley cycle, with peaks every two or three years, and this pattern predates EAB. This boom and bust interval may relate to mast crops such as acorns, as the Red-heads are heavily dependent upon mast as a wintertime food source. Nonetheless, they've fared well: 2012 CBC numbers were 81% higher than in 2003, and scored a record high. 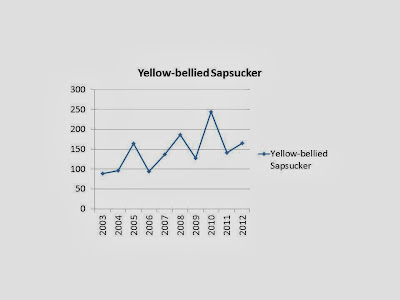 Finally, the Yellow-bellied Sapsucker, our only woodpecker that could be termed a Neotropical migrant. It is a rare Ohio breeder, mostly in the extreme northeastern counties, but a fairly common to common migrant and winter resident. Some individuals make it all the way to southern Central America in winter. Sapsuckers also feed heavily on tree sap via their specialized well fields. These variables aside and since they certainly can and do excavate grubs under the bark, I threw it in. The 2012 CBC total was the 3rd highest ever and a whopping 87% over the 2003 count.

There are certainly a host of variables aside from the Emerald Ash Borer that can effect the population status of our woodpeckers. But evidence is increasingly suggesting that the new and abundant food source is stimulating population growth, at least in some species. One thing seems certain. Whatever the causes, it's high times for our woodpeckers.

EABs are just now starting to move into Kansas, although we've been on the watch for them for several years now. It was interesting to read your descriptions of their effect in Ohio; my heart is heavy over the loss of yet another important forest component.

I've been wondering...are American ashes doomed? What if we let the EAB kill off all our native ash across the country. Will the EAB then be wiped out, too? If that's the case, we could then replant our ashes. Of course, if we accidentally brought over EAB once...

Thanks for your comment, GG, and Jared, I think the jury is still out. Hopefully there will be enough resistant trees to carry on after the bug has (hopefully) run its course. One concern is that some of the ash specialist insects that I mentioned in the post will not be able to survive the widespread loss of ash, even if the trees do eventually recover.

I started a woodpecker population study in a SW Ohio woodlot back in 2007. We are using a standard protocol and doing surveys annually. The EAB is not yet in the woods and ash are a minor component of the forest, so it will be interesting to see if we are able to pick up an uptick in woodpecker numbers.

Red-headed woodpeckers have recently changed their conservation status in Ontario (not a huge drop but enough to notice the decreasing population). Despite a surge in food source, could this be connected to selective logging and removal of ash trees in response to the EAB?