UPDATE NOTICE: I first created this article on December 10, summarizing all of the Snowy Owl reports that I was aware of in Ohio. I then shared this with the 2,200+ member Birding Ohio Facebook page (Kudos to Jeff Loughman for founding that group). More reports came in, and the owl tally is now up to 70 birds in 30 counties. I have been hearing about new owls daily, and I will update the map and running tally below as new information arrives. LAST UPDATE: December 19th.
Photo: John Howard, Highland County, Ohio, December 1, 2013

I wrote about the ongoing irruption of Snowy Owls HERE on December 1, and at that time about a dozen of the big white(ish) birds had been reported in Ohio. Well, they just keep on coming! To date, I've heard of 70 owls in the state, and they are attracting attention far and wide. Most of the local newspapers in areas where the owls have appeared have written about them, and Snowy Owls have made national media as well.

One particularly noteworthy story involved JFK Airport in New York City. Owls have been dropping in to feed along the runways, and word leaked out that several had been shot by airport personnel. There had been five owl-plane collisions, and the airport felt that extermination with extreme prejudice was required. Of course, there are other ways of handling such a situation, and Boston Logan Airport provided the example. There, runway owls have been live-trapped and released elsewhere for many years. After a hue and a cry from the public, JFK to their great credit quickly adopted the more humane method of owl deterrence. NBC4 in New York covered the story, and Corey Finger of 10000 Birds was featured. He did a great job, and this news story was probably instrumental in effecting change. That piece IS HERE.

Anyway, back to the Buckeye State. Every day, it seems, one or a few more owls come to light. Following is a map showing their distribution, along with a number representing how many have been reported in each county. If you know of any additional owls, please send me a note: jimmccormac35@gmail.com 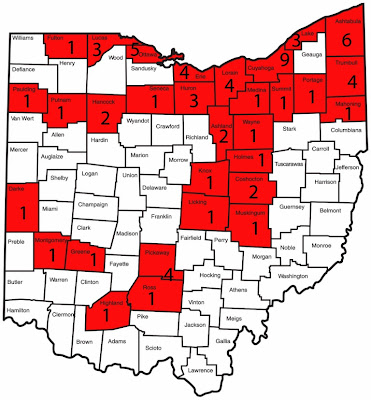 NOTE ABOUT SIGHTINGS: Many of these birds have not lingered, apparently, and were only seen on one day. Several reports have come to light several days after the fact, too. In some cases, the landowners have made it clear that they did not want their location made public due to private property issues. I and others try to run down the specifics of sightings, and when possible make the information available to the birding community. Two good places to keep up to date on Snowy Owl sightings are the Ohio Birds Listserv, and the Facebook Birding Ohio site.
﻿
at December 10, 2013

They are magnificent creatures. I've only seen one once in my life--I was living in Illinois at the time. He flew right over my head--a mere 20 feet from me. Stunning. I will never forget that moment.
Glad to see they changed their tactics in NY

Jim, thanks for the recognition but my interview was only a tiny part of what got the Port Authority to change their mind. Thousands signed a petition that was started by the American Bird Conservancy, so many calls were made to Governor Cuomo's office that people were having a hard time getting through at all, the American Birding Association's Jeff Gordon was helping direct reporters to birders, New York City Audubon and New York State Audubon were rallying members and working feverishly behind the scenes to get the issue resolved, and the New York Birders Facebook page and state listserv were humming with ideas, encouragement, outrage, and activism.

It was pretty amazing that it took about twelve hours from when birders heard about the shootings to when the Port Authority changed their policy - birders can be a political force!

It was gratifying to see the outpouring of birder response/action. We effected change, and fast. There is a big lesson to be learned from that. Birders, collectively, represent perhaps the biggest yet still largely disorganized political advocacy group for environmental issues. Maybe that's starting to change a bit...

Don't sell yourself short. You represented the issue very well on TV, and not everyone would be such a good advocate. The Port Authority is probably more apt to be swayed by lots of New Yorkers protesting the shooting of JFK owls than they would be by birders in Ohio, Iowa or such far-flung places. Although everyone's input on this certainly helped, your work and that of others in NYC led the team.

I live in S.W Madison county and have seen 1 male snowy owl each day on my way to and from work, for about 3 weeks now. Beautiful animal!

Hi Anonymous - excellent report! Could you email me specific directions to that Madison County owl? I would love to try and get some photos. My email is jimmccormac35@gmail.com