The following photos and video come courtesy of John Howard. John lives in southern Ohio's Adams County, and is a naturalist's naturalist. Many of the interesting finds and stories that I have shared on this blog from that part of the world, and there have been many, have been in the company of John. He's shown me many a new plant and animal over the years.
Anyway, the other day John was out and about in the backwoods of Adams County when he happened onto a Ruffed Grouse, Bonasa umbellus. Grouse have declined markedly in much of Ohio, but in some areas of Adams County and neighboring Scioto County, they can still be locally common. Starting about now, one often hears the deep hollow drumming made by displaying males rapidly beating their wings. This sound starts slowly and accelerates, and always reminds me of a lawn mower being fired up. However, male grouse do much more than drum when the testosterone gets flowing, as we shall see. 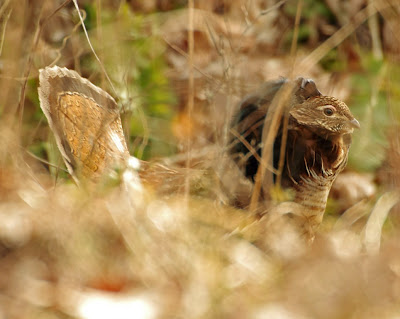 A Ruffed Grouse in the brush or woods can be a devilishly hard bird to spot. I've seen hundreds of them over the years, but most were blurs that exploded under my feet and rocketed off through the forest. We can tell that this bird is a male, so we may be in for some action as it is the amorous season for grouse. The thick blackish terminal tail band on a female is somewhat broken and incomplete at the apex of the tail. 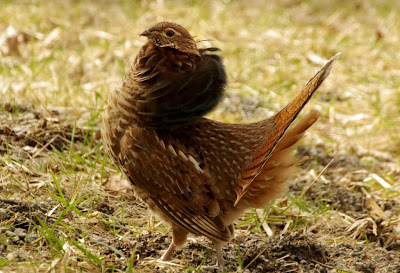 Ah! Out struts the grouse, to put on a display that is guaranteed to wow the grousettes! You can see how this species was dubbed the "ruffed" grouse - check out those manelike feather boas surrounding the bird's neck. When male grouse strut their stuff, they puff these ruffs up to incredible dimensions, flare the tail to its full glory, and stalk about in the manner of a displaying tom turkey.

On more than one occasion, John and I have lamented the fact that our cameras have excellent video capability - but we forgot to use them! It's easy to get caught up in the moment and focus on making photos when a rare opportunity happens along. Well, that didn't happen this time. After making some really nice images, John triggered the video feature and captured the ultra-cool clip above.

Given the relative scarcity of Ruffed Grouse in Ohio these days, there are many Buckeye State birders who have yet to see one. And one can be in the field a lot, over a long period of time, and never witness the strutting courtship display of a love-struck grouse. I never have, and appreciate the chance to witness this neat aspect of grouse behavior via John's video.

Wow! Thank you Jim and John for the fabulous post and video for Mr. Grouse! Absolutely superb!

So what do you think has led to the decline/missing grouse population in central Ohio,Licking co.Dad bought 90acres in eastern part of the county,close to Flint Ridge in the early 60's and we always would jump a couple on our walks.I think it was late 70's,early 80's when we realized they were missing.I remember the nest of 12 eggs we found one spring.

Thanks for the comments - John's stuff is always great! Rick, their demise is mostly due to an overall maturation of forest habitat. Less young scruffy brushy woodlands, which is what grouse favor.