A short while back, on my birthday as fate would have it, I wrote about this drowsy female Barn Owl. She had taken up an intermittent roost site in a Knox County barn. You can see that post HERE.

While the owl may be drowsy in this photo, she becomes a winged tiger come nightfall, and we've got the pellets to prove it. Read on... 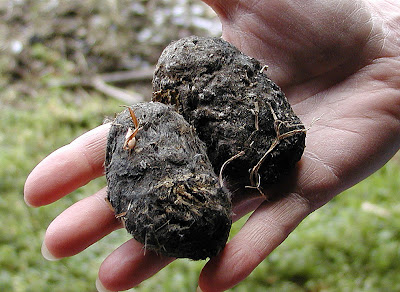 These are Barn Owl pellets. The pellets in this photo are not from the bird in the previous photo; I made this image some years back courtesy of a bird in Jackson County. No matter, the protagonist of this post created pellets just as robust as these. If you scan the aforementioned post you'll some pictures of her handiwork.

The production of an owl pellet is a very necessary bodily function for the owl, but if we humans were to do the same act we would be considered crass indeed. Downright Neanderthal, in fact. Basically, an owl pellet is a giant furball, upchucked via the mouth in the manner of a cat. Much bobbing and wretching can accompany the expulsion of a pellet, but I'm sure the owl feels 10x better afterwards. The contents of a pellet are the indigestible parts of its victims: bone and fur.

You can only imagine my delight when Carma Jo Kauffman sent along this photo. Had it only been my birthday. In all seriousness, I find this photo utterly cool, and am glad that Carma Jo - sometimes tender of the owl - allowed me to share it with you. On my visit, I snatched a few pellets from the barn floor and did a quick and dirty dissection so that she could see the contents, along with a brief lecture on why owl pellets are made.

Carma Jo took owl pellet dissection many steps further, and she and I believe one of her daughters painstaking extracted and sorted the contents of this pellet. Yes, pellet - everything that you see in this photo was removed from just ONE owl pellet. She's even neatly numbered things - those are seven (7), count 'em, skulls! Various and sundry other underpinnings that create the superstructure of a mouse or vole are scattered about. No wonder these owls gag and heave to expel these pellets!

I am not an adept when it comes to identifying skulls and bones that were festering in owl pellets, but I know the parts in Carma Jo's pellet were from small rodents. The primary victim was probably the hapless beast hanging here, the Meadow Vole, Microtus pennsylvanicus. Do yourself a favor: never come back as a vole. Everyone wants to eat you, and the end will not be pretty. Very few voles, I suspect, die of old age. The animal in this photo was harvested by a Northern Shrike, which unceremoniously hung it in this autumn-olive bush. We saw almost the whole thing go down, and it was cool! The shrike, or butcherbird, came lumbering in toting the vole, disappeared into the shrubs, and as soon as the bird left we dashed in to inspect the kill. Later, the shrike, which is essentially a feathered Vlad the Impaler, would have returned and torn the cute little critter apart, gobbling down the chunks.

If a vole could choose its executioner, it would probably opt for the Barn Owl. The end would come quick, with an unseen and unheard WHACK and a fast bite to sever the base of the spinal cord. Hours later, our vole would come back - as a regurgitated compact mass of fur and bones.

This is a White-footed Mouse, Peromyscus leucopus, another of Nature's furry sausages with legs. They are also probably routine victims of Barn Owls. Rodents such as these are good at what they do, which is eat and reproduce. Thanks to voles, mice and their ilk, we have spectacular predators such as Barn Owls to ooh and ahh over.
at March 07, 2013

I get pretty excited when I come across an owl pellet. Years ago I taught Natural History as an after school daycare program in different schools, and disecting owl pellets was the most fun those kids had!