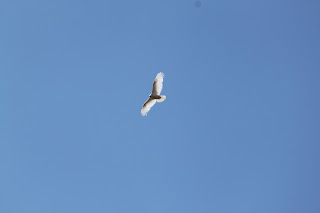 Imagine peering up into the clear blue ether, and seeing this giant white bird wafting over. You'd do a double take, and a birder would slam on the brakes and hop out for a better look. That's what Kathi Groves did yesterday as she cruised up Frederick Pike in Montgomery County, just north of Interstate 70 near Dayton.

Fortunately, she had a camera handy and the presence of mind to snap a few photos. Bev & Ed Neubauer suggested that she send them along to me, and I'm glad that Kathi did because now I can share them with you. 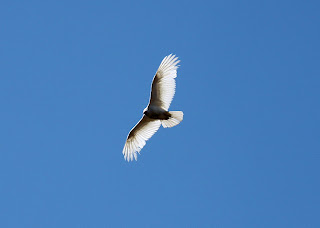 The Turkey Vultures are in full migration mode right now, and it's commonplace to see them drifting high overhead. But most of these dark undertakers of the bird world don't look anything like this! Kathi's vulture is leucistic, and highly so. This genetic anomaly causes melanins, or dark pigments, to be washed out and pale. Most typically leucism manifests itself in a "piebald" pattern - patchy blotches of white, or perhaps just one prominent white bodypart such as the white-headed American Robin that someone just sent me a photo of. Leucism is a numbers game - the more animals in a population, the more likely that an individual will carry this recessive trait. That's why the most commonly reported leucistic birds tend to be abundant species such as American Robins, Red-tailed Hawks, and Turkey Vultures.

Kathi's vulture may be the whitest one that I've seen, but it isn't the only one. For years, a leucistic Turkey Vulture frequented the vicinity of Egypt Valley Wildlife Area in Belmont County, and became a local celebrity. It's patchy white wings made it stand out from afar, and I saw it on a few occasions. Then there's THIS BIRD, from a few years ago. 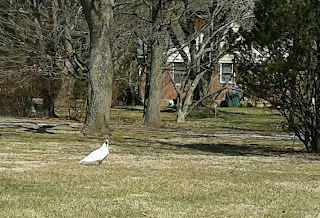 As Kathi watched, the vulture cruised earthward and alit in this yard. I can only imagine the surprise of the homeowners, if they happened to glance out the window and notice this thing.

Thanks to Kathi for sharing her discovery and photos! If you're in the area of Frederick Pike and I-70 in north Dayton, keep an eye peeled for this vulture, and please let me know if you see it. The bird may just be passing through, but perhaps it here to stay.

Wow! I've never seen anything like that before! Talk about being in the right place at the right time!!

That is amazing!!Just saw about 50 Turkey Vultures just this afternoon, defiantly no white ones though.

The first time I saw an all white turkey vulture, in my country are lots of them and nobody see one with such leucistic plumage.
Excellent record!

I think I may have seen one today at John Bryan state Park. Anywhere I could send you a picture?

Northern DelawareCo. D-5 Wildlife area on Tues. July 28th 2015 there was a pure white turkey vulture on my road. Got pics.

There was a pure white turkey vulture on my road on Tues. July 28th 2015. Northern Delaware Co. D-5 wildlife area.

Northern Delaware Co. D-5 Wildlife area on Tues. July 28th 2015 there was a pure white turkey vulture on my road. Got pics.

There is a piebald turkey vulture that lives near me in Ashland. One side of his neck and down one side of his chest is bright white.

June 28 2020 Walking a path by the farm saw and got a picture of a white turkey vulture. It flew by the house about a week ago and I thought I miss identified it but the pic from today dispelled that.
Newark Ohio