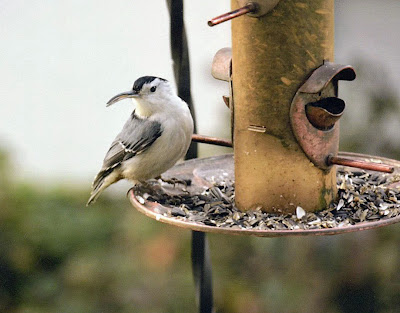 This is certainly NOT your typical White-breasted Nuthatch, and the bird is quite an eye-catcher! Gina Buckey tipped me to the oddball bird, and shared a few images made by her friend Jeannine Snow. I appreciate the info, and the use of the photos.

Our long-billed nuthatch is visiting a Newark, Ohio area feeder, and in spite of its amazing Pinocchioesque bill, has managed to survive for a while. The bird is an adult male, and presumably a hatch-year bird, so it's been poking around with that whopper of a bill for probably eight months or so. 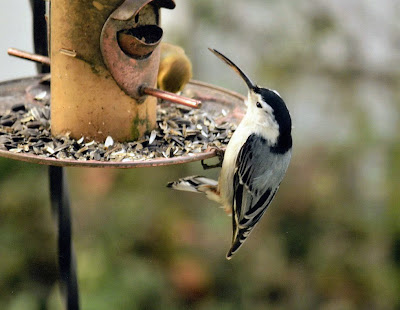 The obvious question: what happened? Bill deformities - and it is an abnormal bill to be sure - are actually well documented and occur routinely enough that such deformities have been the subject of much study. Perhaps the leaders in bill deformity research are scholars at the U.S. Geological Survey's Alaska Science Center. Their pages on this subject ARE HERE. Be prepared to see some bizarre and rather distressing bill deformities.

The upshot of all the research to date is that no one is yet quite sure of the cause or causes that trigger bill aberrations. A whopping 30 species, and not just passerines such as this nuthatch, have been documented with bill deformities in Alaska alone. Obviously, other species elsewhere can develop bill abnormalities.

The Alaskan researchers have focused most intensely on studying weird-billed Black-capped Chickadees. In spite of failing to pinpoint the exact cause or causes, they have identified several likely factors: genetics, environmental contaminants, disease and/or parasites, and nutritional disorders.

Such highly elongated and often grossly distorted bills cannot be good for the affected bird. Alarmingly, birds with bad bills seem to be on the increase, and one hopes that someone runs down the cause sooner than later.

The aforementioned Alaska USGS page has a place to report birds with bill deformities, HERE. I'm not clear on whether they want info on Alaska birds only, though, but if so perhaps they can direct reporters elsewhere. If I learn of a better site to report to, I'll pass it along. Wil Hershberger let me know that the Cornell Lab of Ornithology's Project FeederWatch website has more info on this phenomenon, and offers a reporting venue: RIGHT HERE.

I had a black-capped chickadee here for a while with a similar bill and actually was in contact with the woman from Alaska. I put out sunflower hearts and it was able to grab those to eat. That poor nutty is going to have a tough go this winter...Michelle

Looks like Project Feeder Watch is soliciting reports of deformities from all over the country.
http://www.allaboutbirds.org/Page.aspx?pid=1243

Just attributing it to being another cruel joke by mother nature, I happened across a starling that had no bill at all. This was at Mohican state park about 3 years ago. I watched the unusual bird for several minutes and it was surprisingly adept at just using its tongue to pick up little scraps and crumbs left over by other campers. I can't imagine that he lasted very long but I like to think he was enterprising enough to hang around for awhile. Unfortunately I had no camera on me at the time.