While traipsing through Kiwanis Park last Sunday, where I made the Skunk-cabbage images of the previous post, I encountered the remnants of this plant. It is Virginia Stickseed, Hackelia virginiana, and it is a much cursed plant indeed. When young or in bloom amongst the crush of other summertime greenery, Virginia Stickseed does not stand out and is likely to be overlooked. With age and the ripening of fruit, even non-botanist explorers notice - and curse - this rather weedy borage family member.

The fruit of the stickseed, shown above, are a marvelous adaptation for mammalian dispersal. The exterior of the fruit is heavily armored with stiff hook-tipped bristles - ideal for adhering to passersby. Many a hiker has had the misfortune of inadvertently bumbling through a patch of this plant, only to look down and see that his/her legs are covered with burs. 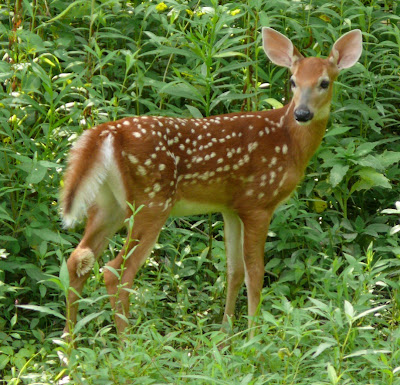 While humans now play a role in moving stickseed and other plants around, our adhesive-fruited flora co-evolved with animals such as this White-tailed Deer. The aforementioned Virginia Stickseed can be a robust plant, and typical luxuriant specimens place their fruit at an altitude perfect for catching furry deer bodies. It probably does not behoove wild mammals to become coated in sticky burs, and their fur has become quite sleek and good at repelling would-be hitchhikers, but some of the plant fruit will stick at least long enough to ride to a new locale.

Just as surely as tanagers and warblers migrate, so do plants. Plants have all sorts of migratory ploys in their bag of tricks, including wind and water dispersal, transport by all manner of insects, forceful physical ejection of seeds, and more. People probably tend to notice the mammalian dispersal plant tactics the most, because these plants don't discriminate against the various mammal species so we get involved in the process too.

A real Jeckyll and Hyde plant, the Showy Tick-trefoil, Desmodium paniculatum. This pea family member is decidedly an ooh and ahh plant when in flower. When it goes to seed, the same fawning admirers often end up cursing the tick-trefoil. Desmodiums produce flat, often triangular fruit known as loments, and loments adhere wonderfully to pants legs and other clothing. I'm sure you've picked some up in your travels.

Columbus Dispatch photographer Eric Albrecht is one of the best in the business, and goes to any length to get his shots as on this trip into Shawnee State Forest. Beating the brush like this often means legs covered with Desmodium loments. If Eric were to fail to rid himself of all the sticky loments, he is liable to transport them far distances and thus aid in the plant's dispersal.

Bur-bearing plants are found in many families, and exhibit great variation in stature. There are even elfin mammalian dispersal plants that hold their fruit at the low level of a chipmunk. While the odd bur undoubtedly gets taken for a ride by hyperactive chipmunks, their primary method of plant transportation is caching, and forgetting, seeds.

White-footed mice and other rodents likely transport their share of seeds, too, without intending to.


Mice and other rodents often dwell in rocky cliffs and outcrops, and such sites are home to this lovely little plant, the Dwarf Enchanter's Nightshade, Circaea alpina. Its tiny ellipsoid fruit are beset with sticky hairs, and are in perfect position to latch onto small rodents making the rounds of the rocks at night. Thus, newer and higher ledges can be occupied by the plant, thanks to the mice. 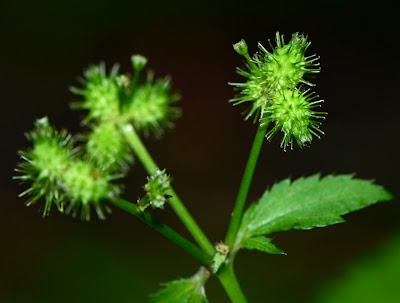 Long-fruited Snakeroot, Sanicula trifoliata, is one of four very common Sanicula species in Ohio. This one shares limelight with several other dozen species of plants that were discovered and described to science in Ohio. The plant probably cares less about that distinction than it does about sticking its burs to some passing mammal.

An Eastern Cottontail, a likely common transporter of Sanicula snakeroots. These plants often grow luxuriantly in prime rabbit habitat, and are of the perfect height to snare passing bunnies.

Next summer and fall, when you pause to pluck burs from your clothes and cast them to the ground, just take note that you've been outfoxed by the plant world.
at February 27, 2013

This summer I've been teaching myself to ID a lot of plants in Southeastern PA, and I've been surprised to learn how many plants use the "stick to fur" mechanism for distributing their seeds.

There's a ton of Sanicula near where I live, I think most of it is Sanicula canadensis, a closely related species. Also we have a lot of the Enchanter's Nighthade, Circaea. Another plant that I've seen for years that I've only recently learned how to ID, is Bidens frondosa. And, in a completely different family, Desmodium canadense, or "Showy tick trefoil", whose seeds look a lot like ticks. And then of course there are the non-native burdocks.

We had a beagle-type mutt that would always eat the showy tick trefoil seeds that were stuck all over our pants, socks, and shoe laces. It sure was helpful!