The yellow cardinal lives on 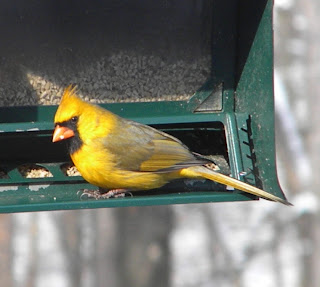 Photo: Tom Ruggles
One of the most popular posts that I've ever made on this blog involved the spectacular bird in these photos. Almost exactly three years ago, Tom Ruggles of Zanesville sent along photos of this striking North Cardinal, Cardinalis cardinalis, but it wasn't just any old run of the mill redbird. In fact, it wasn't red at all - it was a "yellowbird"! Technically speaking, this cardinal is xanthochroic (zan-tho-kro-ik). That fancy term describes a genetic anomaly that creates yellowish overtones in birds. Rather than rehash the workings of xanthochroism here, should you be interested, don your propeller-topped beanie and see MY ORIGINAL POST. 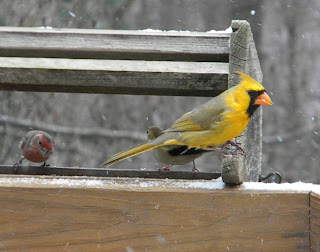 ﻿Photo: Tom Ruggles
The lutino cardinal shares the feeding station with a male House Finch and an American Goldfinch. Without doubt, this is the coolest cardinal that I've seen.
Last Friday, I participated in the Chandlersville Christmas Bird Count, which covers the Wilds and nearby rural Muskingum County. And there I finally met Mr. Ruggles, who brought this strange cardinal to light and has no doubt fed it many pounds of seed.﻿ And to my great surprise and pleasure, Tom reported that the yellow cardinal was still very much alive and well, and remains a regular visitor at his feeders!
Finding this to be rather awesome news, I asked Tom to please send along some recent photos and he was kind enough to oblige. And here we have it - the famous yellow cardinal of Muskingum County, at least three plus years of age and still kicking. I hope that this cardinal that was touched by Midas continues on for a LONG time!
Thanks much to Tom Ruggles for sharing his photos, and doing his part to support this bird!
at January 03, 2012

incredible! I've heard about these guys but never imagined they'd be such a solid yellow. Gorgeous.

Very cool! I'm not much into recycled posts, but this one was worth it.

Recycled post? Nothing recycled about this! Thanks for your comments!

Fascinating. I thought I remembered reading somewhere that Northern Cardinals happen to have particularly short life spans, so the fact that Mr. Ruggles has seen this same cardinal for at least 3 consecutive years seems mighty impressive! I would think that it's aberrant coloring might make it more prone to predation, but maybe it actually makes it less so? Very cool indeed. Do you know if yellowbird has a name?

I'm impressed he's still alive! It's not unusual for abnormal pigmentation in birds to link to other health problems. I wonder if he has been able to attract a mate and reproduce? Thanks for the update!

So fabulous!! I have never heard of
a yellow cardinal!! So beautiful & rare!! Thank you so much for sharing!
I hope he goes forth and multiplies!! ;)

I've never seen a xanthocroic cardinal...is beautiful. I suppose that such kind of mutations is the beggining of birds variations and in long times causes speciation.

Oh, that is most excellent..! A list I'm on is discussing albino birds so am taking the opportunity to share the pics of the yellow female Cardinal that graced my North Georgia yard last year.. Was tracking you down to also share your posts about this male.. Too cool to find out he came back AGAIN.. Here's hoping the female revisits here as well.. :D

I am pretty sure I have seen a yellow cardinal in my tree.. I tried to get pics,I did, but they are not the best..Hurrying before they left.

I am pretty sure I just saw one of these outside on the feeder...the yellow beak and tuft of hair, yellow breast with the gray on wings. Very Cool!

OK I came by this post because I saw one of these at my daughter's house in Tulsa, OK. I had never heard or seen one. I see now that they do exist. How interesting. I'll see if I can get her to get a photo of it.

too cool that so rocks made my day mary from texas

Never seen one of these - until yesterday. Saw a pair of them on a tree outside of the Crystal Clinic Orthopaedic Center in Bath, OH. No one knew what they were!

Seen a female, I believe, the morning of September 15th in Shreveport, LA. She had been around since the end of August but is quick to fly away when I try to get outside with a good camera. Saw her again this morning as I was holding my 3 month old. Had to get what I could on the phone. She is about the same color as the yellow finch feeder. Have a look:

i live in maryland and just seen what seems to be a female of this bird it looks young and i hope it comes back for a photo shoot...

I just saw one in Chardon, Ohio!

We have one in Sewickley, Pa. She did mate and has 3 babies in the best right now. This is the 3rd year I have seen her. I can't get a very good photo of her as she doesn't seem to like her picture taken.

We have one in Sewickley, Pa. She has a nest with 3 babies. She has been around for the last 3years. I can never get a good photo of her as she doesn't seem to like her picture taken.

Saw them in Hemlock Farms, lords valley pa just last week a flock of them getting a drink at our fish pond

I believe I may have spotted a possible yellow cardinal streaking by on my farm in northern balto co, md today. Bird was the size of a cardinal, mostly yellow with darker accents on wings I believe and flew with a slight dip
up & down to its flight path. Many red cardinals in the area. What are your thoughts? Thx, Mac Finney

Besides yellow cardinal which has been seen in this region, another possible yellow-ish bird of this size is eastern meadowlark, but what I saw didn’t look as stubby. How about the up & down dipping of its flight path? Thoughts anyone? Mac Finney

Yellow Cardinal Alert cancelled! After some research, most likely was a female orchard or baltimore Oriole. Isn’t early for them? Habit is ideal though.

I live in South Central Illinois approximately an hour east of the Illinois River & an hour north of St. Louis, MO. This week & part of last I have spotted 2 birds looking exactly like cardinals, but one is a light brown-yellow body & head with a tuft & the wings are darker. It was a gloomy day & my photos were thru glass about 15 feet away. Just this morning I saw the 2nd one that was mostly rust colored but it did not appear to be a young new bird for the year, the parent’s were not with it feeding him/her. I was unable to get a picture then. I am going to continue to gather documentation & get with Cornell to correct my vision!!