And now, a white\pink cardinal! 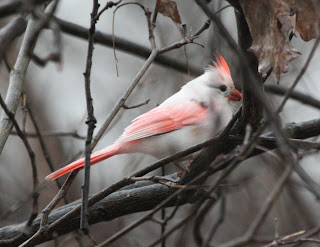 Photo: Paul Hurtado
Back on December 29, Paul Hurtado was strolling through some woods along the Olentangy River here in Columbus when he encountered a most interesting beast (Ohio birders will probably remember last May's famous Kirtland's Warbler, which Paul also found here in Columbus). The female Northern Cardinal in the photo is a fully leucistic individual, which means that it has a genetic trait that blocks the production of melanin. Melanins are pigments that manifest themselves as dark colorations in feathers, but they also serve a whole host of other functions. David Sibley has done a thorough and scholarly job of detailing pigment abnormalities in birds RIGHT HERE.

This pink & white cardinal is just about as crazy looking as the yellow one in the preceding post, and thanks to Paul for brining it to light.
at January 04, 2012

awesome! how rare is this condition?

Woow, looks really nice with leucism, I never see an image of this species with such coloration.
Very interesting blog I discover few a minutes ago. I put a link to my bird blog

What a beautiful capture!

Is this just an oddity, or are we seeing the beginning of a trend to problems as yet undiscovered with possible genetic disturbances? Not being a doomsdayer, just wondering...

Hi all, and thanks for your comments. Nothing to worry about with these abnormally pigmented birds. Just about every population of every species of birds has the potential to express the genetics that cause albinism, leucism, or other pigment abnormalities. It's basically a numbers game: the more individuals there are in a species' population, the more likely an abnormality will express itself, and the more likely it is we'll see such an individual. That's why white or piebald white-tailed deer, red-tailed hawks, American robins, cardinals and other super common species are regularly observed with pigment abnormalities.

Jim, I'd add house sparrows to that lot. Mightn't it also be the product of smaller isolated populations that are doing some inbreeding and thus bringing recessive genes to the forefront? I've always wondered that when I see leucism in house sparrows in the city. I'm also thinking of the melanistic gray squirrels that pop up in urban areas.
This is a lovely girl cardinal!
My favorite white bird will always be the turkey vulture I saw twice, once over our house and once in Woodsfield. Mmm. Whatta bird.

I think the phenomenon of black-morph gray squirrels is a different kettle of fish. Here's a decent article about that: http://www.woodlandhabitat.com/articles/black-squirrels.htm

I'd think natural selection would probably rule against strongly albinistic/leucistic birds, as the lack of melanin apparently causes structural weakness in feather shafts, worsened vision, and other undesirable traits. Apparently mammals - such as true albino squirrels - can deal with this better.

I too got to see that "piebald" partial leucistic Turkey Vulture, and what a sight that was!

WOW! What a beautiful bird. Are you sure there's not a wild and crazy male cockatoo on the loose along the Olentangy, that's responsible for this? :)

Yes I have a white cardinal in my yard as well. Clawson, Michigan. She's beautiful.

I saw one too in Cincinnati! Amazing!

I have one too in NJ. Gorgeous!

I have a female fully leucistic cardinal that has been coming to my feeders for the last two years now. Magnolia, Texas

I thought I was seeing things, but I wasn't. I had one in my backyard in Florida panhandle.

Wow! Great find. I saw a very pale cardinal today but this one is very interesting.

We saw a pale one at my bird feeders just the other day in New York. I really hope it comes back so I can get a picture of it. It was beautiful.

In Northeast Arkansas. Have one in our yard today. Gorgeous!

I'm in the Atlanta suburbs and have had a white cardinal she she hatched here 2 years ago.

My daughter is big on birds. Being autistic she is obsessed and very particular. She insisted on seeing a pink Cardinal. I didn't believe her until I offered to look it up for her. She was right! We have one in our trees back yard in Syracuse NY.

We have a pink cardinal this year - I live near Lebanon IN!!!!!!

I have one that visits my feeder.