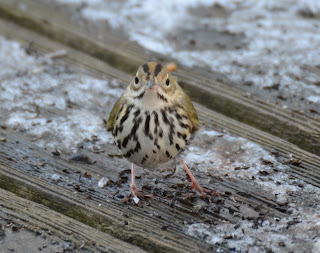 A frosty-footed Ovenbird, Seiurus aurocapilla, peers quizzically at your blogger. Perhaps the thrushlike little warbler was amused by the large clicking appendage that I sported.

It's been a bit of a warblerpalooza this winter in central Ohio. First, this tough little Ovenbird turns up at Inniswood Metro Gardens on December 7, as reported HERE and HERE. Then comes word of an American Redstart, Setophaga ruticilla, that was found on the Columbus Christmas Bird Count back on December 18. That's really an amazing find, and would set the record late date for an Ohio redstart. Finally, Rob Thorn turned up a Northern Waterthrush, Parkesia noveboracensis, in southern Delaware County two days ago.

I could stand no more, and off I shot at lunch today to try and hunt down that waterthrush and shoot it with my camera. No cigar. Rob found the bird in a land of plenty for foraging waterthrushes, and it has apparently moved off the spot where he saw it. 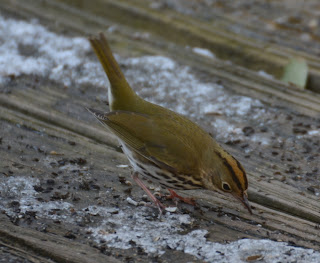 Fortunately for me and my prospects of a multiple species warbler list for January in Ohio, the Inniswood Ovenbird was directly en route on my return trip. Tom Bain and I arrived at the Innis House simultaneously, sauntered on in, and had to wait about 0.005 seconds before seeing the bird. There it was, the jaunty little tail-cocker, boldly strutting about the wooden deck picking at shards of seed cast from the feeders above. A rather surreal scene, this summertime warbler strolling about an ice and snow covered deck, keeping a sharp eye on a trio of bruiser gray squirrels who were also vaccuuming seeds from the planking. 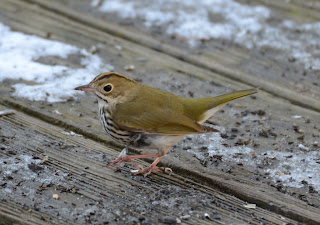 Senor (Senora?) Ovenbird's injury is obvious in this photo (dark blotch, mid flank), and it's the effects of that wound that probably led to it forgoing the long flight to the tropics, where most of its ilk are currently residing. Ovenbirds rank high on the (literal) hit list of bird species tallied beneath buildings and towers, but I don't think that injury is the result of striking an unforgiving inanimate object. Perhaps a Sharp-shinned Hawk got in a swipe. The bird can still run like a trailer park tart chasing the new lottery winner two double-wides down, and flies like a bullet, so it's in at least reasonable health. Whatever the cause of its yen to stick in the north, we've got an Ovenbird well on its way to overwintering in central Ohio, and providing an unlikely tick for all of those twitchers going after a Big January List. 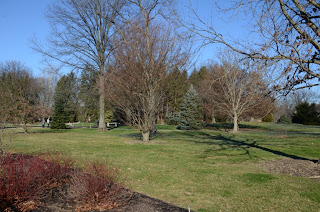 Try and get out to Inniswood and become a member of Eskimo Ovenbird's fan club. And when you do, allot some time to give this 123-acre park/arboretum/natural area the once over. It is one of the most beautiful patches in central Ohio and is chock full of wildlife. You'll exit with a good-sized bird list, and an appreciation for the vision of the grounds' original owners, Grace and Mary Innis.

Major props to Jen Snyder and Jennifer Kleinrichert for bringing our unexpected wintertime visitor to light, and to Jennifer for so diligently keeping the birding community up to date on the Ovenbird's status.
at January 05, 2012

Interesting species. I think until a moment ago ovenbirds belongs to Furnariidae family becuase we have here Horneros (means in spanish ovenbird). every day I learn something new.

Thanks for your comments, Hernan, and I'm glad you're following the blog! Yes, even though they share a common name, this Ovenbird is quite differerent from the Furnariids.

Nice to continue hearing about this ovenbird - I like the Ohiobirds posts. Could you tell if the injured area is dark because of lost feathers or is it a bruise - just curious. This bird needs to declare its Ohio residency. :-)

Hi Pam, I think the darkened area may be due to some missing feathers but I'm not sure. Whatever the cause, it would seem to be the result of an injury and a probable cause for the bird's failure to migrate.

"The bird can still run like a trailer park tart chasing the new lottery winner two double-wides down, and flies like a bullet, so it's in at least reasonable health." hee hee..You crack me up! Great post.. Happy Birding!

"The bird can still run like a trailer park tart chasing the new lottery winner two double-wides down . . ." LOL! That's rich, Jim! I love your analogy -- gotta remember that one. Beautiful pics you got.

Jim: Just before dusk this evening, I saw what may have been waterthrush at the upstream end of the big pond at Carriage Hill Metropark in Huber Heights north of Dayton. It was bobbing its tail while moving along the top of a partially-submerged log in the shallow end of the lake. I did not have my binoculars and cannot confirm this, but the size and movement of the bird reminded me of a waterthrush. At first I doubted this because of the time of year, but then I read about the waterthrush in your post. I thought it might have been a spotted sandpiper, but it appeared smaller and appeared to bob its tail rather than "teeter".

Hi Pat. Sounds like a good candidate for a waterthrush. If possible, you may want to try and refind the bird and get better looks/photos.